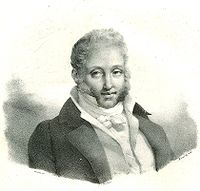 Carulli was born in Naples
Naples
Naples is a city in Southern Italy, situated on the country's west coast by the Gulf of Naples. Lying between two notable volcanic regions, Mount Vesuvius and the Phlegraean Fields, it is the capital of the region of Campania and of the province of Naples...
, then part of the Kingdom of Naples
Kingdom of Naples
The Kingdom of Naples, comprising the southern part of the Italian peninsula, was the remainder of the old Kingdom of Sicily after secession of the island of Sicily as a result of the Sicilian Vespers rebellion of 1282. Known to contemporaries as the Kingdom of Sicily, it is dubbed Kingdom of...
. His father, Michele, was a distinguished literator, secretary to the delegate of the Neapolitan Jurisdiction. Like many of his contemporaries, he was taught musical theory
Music theory
Music theory is the study of how music works. It examines the language and notation of music. It seeks to identify patterns and structures in composers' techniques across or within genres, styles, or historical periods...
by a priest, who was also an amateur musician. Carulli's first instrument was the cello
Cello
The cello is a bowed string instrument with four strings tuned in perfect fifths. It is a member of the violin family of musical instruments, which also includes the violin, viola, and double bass. Old forms of the instrument in the Baroque era are baryton and viol .A person who plays a cello is...
, but when he was twenty he discovered the guitar
Guitar
The guitar is a plucked string instrument, usually played with fingers or a pick. The guitar consists of a body with a rigid neck to which the strings, generally six in number, are attached. Guitars are traditionally constructed of various woods and strung with animal gut or, more recently, with...
and devoted his life to the study and advancement of the guitar. As there were no professional guitar teachers in Naples at the time, Carulli developed his own style of playing.

Carulli was a gifted performer. His concerts in Naples were so popular that he soon began touring Europe. Around 1801 Carulli married a French woman, Marie-Josephine Boyer, and had a son with her. A few years later Carulli started to compose in Milan
Milan
Milan is the second-largest city in Italy and the capital city of the region of Lombardy and of the province of Milan. The city proper has a population of about 1.3 million, while its urban area, roughly coinciding with its administrative province and the bordering Province of Monza and Brianza ,...
, where he contributed to local publications. After a highly successful Paris
Paris
Paris is the capital and largest city in France, situated on the river Seine, in northern France, at the heart of the Île-de-France region...
tour, Carulli moved there. At the time the city was known as the 'music-capital' of the world, and he stayed there for the rest of his life.

In Paris Carulli became a very successful musician and teacher. He fulfilled his intention of making the guitar popular and fashionable among the upper classes and Paris musicians. It was also in Paris that he published most of his works, eventually becoming a publisher himself and printing the works of other prominent guitarists including Filippo Gragnani
Filippo Gragnani
Filippo Gragnani was an Italian guitarist and composer.Gragnani was born in Livorno, the son of Antonio Gragnani...
whom he befriended and who later dedicated three guitar duets to Carulli.

In the 1830s, many European guitarists followed Carulli to Paris, apparently "attracted by his personality". With so many other guitarists in Paris, Carulli worked harder at his teaching, and soon had counted members of the Parisian nobility among his students.

Many of the pieces now regarded as Carulli's greatest were initially turned down by the publishers as being too hard for the average player, and it is likely that many masterpieces were lost this way. Undeterred, Carulli started publishing his pieces himself. However, the great majority of Carulli's surviving works are those that were considered 'safe' enough to be accepted by other publishers, mainly for the teaching of certain techniques or for beginners. Although he had many students and supporters, Carulli began to believe he didn't deserve his impressive reputation because most of the great works he had composed were never published.

Confined to mainly simple pieces, Carulli wrote his world-famous method of classical guitar, "Harmony Applied to the Guitar", a collection of pieces that are still used today in tuition. At the time of publishing, the method was very popular and had many editions published.

Later in life, Carulli began to experiment with changes in guitar construction. With Lacote, a French guitar maker, he made some significant changes for improving the sound of the guitar.

Carulli was among the most prolific composers of his time. He wrote more than four hundred works for the guitar, and countless others for various instrumental combinations, always including the guitar. His most influential work of all was his "Method, op. 27", published in 1810, and still used widely today in training students of the classical guitar. Carulli also composed some pieces for guitar and piano with his son Gustavo. He wrote works for chamber orchestra and other ensembles.

Classical guitarists have recorded many of his works. Arguably his most famous work is a duet for guitar and flute, which was recorded by Alexander Lagoya and Jean-Pierre Rampal
Jean-Pierre Rampal
Jean-Pierre Louis Rampal was a French flautist. He has been personally "credited with returning to the flute the popularity as a solo classical instrument it had not held since the 18th century."-Early years:...
, although his Duo in G Op.34 achieved a measure of indirect fame in Britain as the theme tune of cult 1980s science fiction/television game show The Adventure Game
The Adventure Game
The Adventure Game was a game show, aimed at children but with an adult following, which was originally broadcast on UK television channels BBC1 and BBC2 between 24 May 1980 and 18 February 1986. The story in each show was that the two celebrity contestants and a member of the public had travelled...
. The Duo in G has been recorded several times, most famously by Julian Bream
Julian Bream
Julian Bream, CBE is an English classical guitarist and lutenist and is one of the most distinguished classical guitarists of the 20th century. He has also been successful in renewing popular interest in the Renaissance lute....
and John Williams
John Williams (guitarist)
John Christopher Williams is an Australian classical guitarist, and a long-term resident of the United Kingdom. In 1973, he shared a Grammy Award win in the 'Best Chamber Music Performance' category with Julian Bream for Julian and John .-Biography:John Williams was born on 24 April 1941 in...
.

Among the guitars used by Carulli, one finds