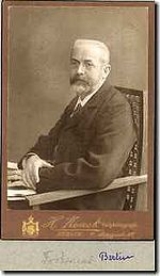 Encyclopedia
Ferdinand Georg Frobenius (October 26, 1849 – August 3, 1917) was a German
Germans
The Germans are a Germanic ethnic group native to Central Europe. The English term Germans has referred to the German-speaking population of the Holy Roman Empire since the Late Middle Ages....
mathematician
Mathematician
A mathematician is a person whose primary area of study is the field of mathematics. Mathematicians are concerned with quantity, structure, space, and change....
, best known for his contributions to the theory of differential equations and to group theory
Group theory
In mathematics and abstract algebra, group theory studies the algebraic structures known as groups.The concept of a group is central to abstract algebra: other well-known algebraic structures, such as rings, fields, and vector spaces can all be seen as groups endowed with additional operations and...
. He also gave the first full proof for the Cayley–Hamilton theorem.

Group theory
Group theory
In mathematics and abstract algebra, group theory studies the algebraic structures known as groups.The concept of a group is central to abstract algebra: other well-known algebraic structures, such as rings, fields, and vector spaces can all be seen as groups endowed with additional operations and...
was one of Frobenius' principal interests in the second half of his career. One of his first contributions was the proof of the Sylow theorems for abstract groups. Earlier proofs had been for permutation group
Permutation group
In mathematics, a permutation group is a group G whose elements are permutations of a given set M, and whose group operation is the composition of permutations in G ; the relationship is often written as...
s. His proof of the first Sylow theorem (on the existence of Sylow groups) is one of those frequently used today.


More important was his creation of the theory of group characters and group representation
Group representation
In the mathematical field of representation theory, group representations describe abstract groups in terms of linear transformations of vector spaces; in particular, they can be used to represent group elements as matrices so that the group operation can be represented by matrix multiplication...
s, which are fundamental tools for studying the structure of groups. This work led to the notion of Frobenius reciprocity
Character theory
In mathematics, more specifically in group theory, the character of a group representation is a function on the group which associates to each group element the trace of the corresponding matrix....
and the definition of what are now called Frobenius group
Frobenius group
In mathematics, a Frobenius group is a transitive permutation group on a finite set, such that no non-trivial elementfixes more than one point and some non-trivial element fixes a point.They are named after F. G. Frobenius.- Structure :...
s. A group G is said to be a Frobenius group if there is a subgroup H < G such that

In that case, the set

together with the identity element of G forms a subgroup which is nilpotent
Nilpotent group
In mathematics, more specifically in the field of group theory, a nilpotent group is a group that is "almost abelian". This idea is motivated by the fact that nilpotent groups are solvable, and for finite nilpotent groups, two elements having relatively prime orders must commute...
as Thompson showed in his PhD thesis. All known proofs of that theorem make use of characters. In his first paper about characters (1896), Frobenius constructed the character table of the group

of order (1/2)(p3 − p) for all odd primes p (this group is simple provided p > 3). He also
made fundamental contributions to the representation theory of the symmetric and alternating groups.

Frobenius introduced a canonical way of turning primes into conjugacy classes in Galois group
Galois group
In mathematics, more specifically in the area of modern algebra known as Galois theory, the Galois group of a certain type of field extension is a specific group associated with the field extension...
s over Q. Specifically, if K/Q is a finite Galois extension then to each (positive) prime p which does not ramify
Ramification
In mathematics, ramification is a geometric term used for 'branching out', in the way that the square root function, for complex numbers, can be seen to have two branches differing in sign...
in K and to each prime ideal P lying over p in K there is a unique element g of Gal(K/Q) satisfying the condition g(x) = xp (mod P) for all integers x of K. Varying P over p changes g into a conjugate (and every conjugate of g occurs in this way), so the conjugacy class of g in the Galois group is canonically associated to p. This is called the Frobenius conjugacy class of p and any element of
the conjugacy class is called a Frobenius element of p. If we take for K the mth cyclotomic field
Cyclotomic field
In number theory, a cyclotomic field is a number field obtained by adjoining a complex primitive root of unity to Q, the field of rational numbers...
, whose Galois group over Q is the units modulo m (and thus
is abelian, so conjugacy classes become elements), then for p not dividing m the Frobenius class in the Galois group is p mod m. From this point of view,
the distribution of Frobenius conjugacy classes in Galois groups over Q (or, more generally, Galois groups over any number field) generalizes Dirichlet's classical result about primes in arithmetic progressions. The study of Galois groups of infinite-degree extensions of Q depends crucially on this construction of Frobenius elements, which provides in a sense a dense subset of elements which are accessible to detailed study.