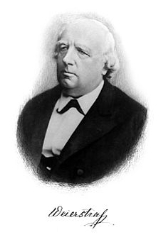 Overview
Karl Theodor Wilhelm Weierstrass was a German
Germany
Germany , officially the Federal Republic of Germany , is a federal parliamentary republic in Europe. The country consists of 16 states while the capital and largest city is Berlin. Germany covers an area of 357,021 km2 and has a largely temperate seasonal climate...
mathematician
Mathematics
Mathematics is the study of quantity, space, structure, and change. Mathematicians seek out patterns and formulate new conjectures. Mathematicians resolve the truth or falsity of conjectures by mathematical proofs, which are arguments sufficient to convince other mathematicians of their validity...
who is often cited as the "father of modern analysis
Mathematical analysis
Mathematical analysis, which mathematicians refer to simply as analysis, has its beginnings in the rigorous formulation of infinitesimal calculus. It is a branch of pure mathematics that includes the theories of differentiation, integration and measure, limits, infinite series, and analytic functions...
".
Weierstrass was born in Ostenfelde, part of Ennigerloh
Ennigerloh
Ennigerloh is a town in the district of Warendorf, in North Rhine-Westphalia, Germany. It is located approximately 25 km northeast of Hamm and 30 km southeast of Münster....
, Province of Westphalia
Province of Westphalia
The Province of Westphalia was a province of the Kingdom of Prussia and the Free State of Prussia from 1815 to 1946.-History:Napoleon Bonaparte founded the Kingdom of Westphalia, which was a client state of the First French Empire from 1807 to 1813...
.

Weierstrass was the eldest son of Wilhelm Weierstrass, a government official, and Theodora Vonderforst. The family soon moved to Westernkotten in Westphalia, where Weierstrass' three siblings, Peter, Klara, and Elise, were born; none of whom married.