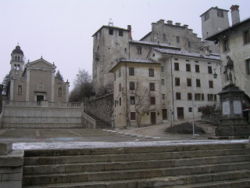 Feltre is a town and comune
Comune
In Italy, the comune is the basic administrative division, and may be properly approximated in casual speech by the English word township or municipality.-Importance and function:...
of the province of Belluno
Province of Belluno
TheThe Province of Belluno is a province in the Veneto region of Italy. Its capital is the city of Belluno.It has an area of 3,678 km², and a total population of 214,026 .-Geography:...
in Veneto
Veneto
Veneto is one of the 20 regions of Italy. Its population is about 5 million, ranking 5th in Italy.Veneto had been for more than a millennium an independent state, the Republic of Venice, until it was eventually annexed by Italy in 1866 after brief Austrian and French rule...
, northern Italy
Italy
Italy , officially the Italian Republic languages]] under the European Charter for Regional or Minority Languages. In each of these, Italy's official name is as follows:;;;;;;;;), is a unitary parliamentary republic in South-Central Europe. To the north it borders France, Switzerland, Austria and...
. A hill town in the southern reaches of the province, it is located on the Stizzon River, about 4 km from its junction with the Piave
Piave River
Piave is a river in north Italy. It begins in the Alps and flows southeast for into the Adriatic Sea near the city of Venice....
, and 20 km southwest from Belluno
Belluno
Belluno , is a town and province in the Veneto region of northern Italy. Located about 100 kilometres north of Venice, Belluno is the capital of the province of Belluno and the most important city in the Eastern Dolomiti's region. With its roughly 37,000 inhabitants, it the largest populated area...
. The Dolomites
Dolomites
The Dolomites are a mountain range located in north-eastern Italy. It is a part of Southern Limestone Alps and extends from the River Adige in the west to the Piave Valley in the east. The northern and southern borders are defined by the Puster Valley and the Sugana Valley...
loom to the north of the town. 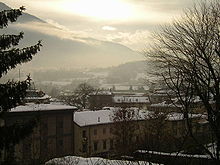 It was known in Roman times as Feltria and described as an oppidum
Oppidum
Oppidum is a Latin word meaning the main settlement in any administrative area of ancient Rome. The word is derived from the earlier Latin ob-pedum, "enclosed space," possibly from the Proto-Indo-European *pedóm-, "occupied space" or "footprint."Julius Caesar described the larger Celtic Iron Age...
by Pliny
Pliny the Elder
Gaius Plinius Secundus , better known as Pliny the Elder, was a Roman author, naturalist, and natural philosopher, as well as naval and army commander of the early Roman Empire, and personal friend of the emperor Vespasian...
, who assigned its foundation to the Alpine tribe of the Rhaetians. The city obtained the status of municipium
Municipium
Municipium , the prototype of English municipality, was the Latin term for a town or city. Etymologically the municipium was a social contract between municipes, the "duty holders," or citizens of the town. The duties, or munera, were a communal obligation assumed by the municipes in exchange for...
in 49 BC, in spite of its rigorous climate:

Feltria lay on a Roman road
Roman road
The Roman roads were a vital part of the development of the Roman state, from about 500 BC through the expansion during the Roman Republic and the Roman Empire. Roman roads enabled the Romans to move armies and trade goods and to communicate. The Roman road system spanned more than 400,000 km...
mentioned in the Antonine Itinerary
Antonine Itinerary
The Antonine Itinerary is a register of the stations and distances along the various roads of the Roman empire, containing directions how to get from one Roman settlement to another...
as passing from Opitergium (Oderzo
Oderzo
Oderzo is a town and comune in the province of Treviso, Veneto, northern Italy.It lies in the heart of the Venetian plain, about 66 km to the northeast of Venice...
) through Feltria to Tridentum (Trento
Trento
Trento is an Italian city located in the Adige River valley in Trentino-Alto Adige/Südtirol. It is the capital of Trentino...
).

After the fall of the Western Empire
Western Roman Empire
The Western Roman Empire was the western half of the Roman Empire after its division by Diocletian in 285; the other half of the Roman Empire was the Eastern Roman Empire, commonly referred to today as the Byzantine Empire....
, under which it had developed into a flourishing city, it became a Lombard
Lombards
The Lombards , also referred to as Longobards, were a Germanic tribe of Scandinavian origin, who from 568 to 774 ruled a Kingdom in Italy...
dominion. Later in the Middle Ages, it was ruled by Ezzelino da Romano
Ezzelino da Romano
Ezzelino da Romano was the name of various seignors of fiefs and cities in northern Italy starting from the 12th century AD.*The family was founded by Ecelo , who received the fiefs of Romano, including Romano d'Ezzelino and Onara, near Cittadella, Veneto*Ezzelino II il Balbo*Ezzelino II da Romano,...
, by the Camino family, and then by the Scaligeri of Verona
Verona
Verona ; German Bern, Dietrichsbern or Welschbern) is a city in the Veneto, northern Italy, with approx. 265,000 inhabitants and one of the seven chef-lieus of the region. It is the second largest city municipality in the region and the third of North-Eastern Italy. The metropolitan area of Verona...
, from 1315 to 1337. Feltre was subsequently under Charles IV, Holy Roman Emperor
Charles IV, Holy Roman Emperor
Charles IV , born Wenceslaus , was the second king of Bohemia from the House of Luxembourg, and the first king of Bohemia to also become Holy Roman Emperor....
, the da Carrara and the Visconti
House of Visconti
Visconti is the family name of two important Italian noble dynasties of the Middle Ages. There are two distinct Visconti families: The first one in the Republic of Pisa in the mid twelfth century who achieved prominence first in Pisa, then in Sardinia where they became rulers of Gallura...
until 1404, when, together with Belluno
Belluno
Belluno , is a town and province in the Veneto region of northern Italy. Located about 100 kilometres north of Venice, Belluno is the capital of the province of Belluno and the most important city in the Eastern Dolomiti's region. With its roughly 37,000 inhabitants, it the largest populated area...
, it was conquered by the Republic of Venice
Republic of Venice
The Republic of Venice or Venetian Republic was a state originating from the city of Venice in Northeastern Italy. It existed for over a millennium, from the late 7th century until 1797. It was formally known as the Most Serene Republic of Venice and is often referred to as La Serenissima, in...
. In 1499 it received a new line of walls.

In 1509 the center of the town was mostly destroyed during battles between the Venetians and the League of Cambrai, and later rebuilt with a characteristic 16th century style. In 1797, after the capitulation of Venice to Napoleon, it was ruled for some time by the French. Napoleon made his minister of war, Henri Jacques Guillaume Clarke
Henri Jacques Guillaume Clarke
Henri-Jacques-Guillaume Clarke, 1st Count of Hunebourg, 1st Duke of Feltre , born in Landrecies, was a Marshal of France and French politician of Irish descent.Clarke entered the French army in 1782...
, Duke of Feltre in 1807. After the Congress of Vienna
Congress of Vienna
The Congress of Vienna was a conference of ambassadors of European states chaired by Klemens Wenzel von Metternich, and held in Vienna from September, 1814 to June, 1815. The objective of the Congress was to settle the many issues arising from the French Revolutionary Wars, the Napoleonic Wars,...
(1814), Feltre was assigned to the Austrian Empire
Austrian Empire
The Austrian Empire was a modern era successor empire, which was centered on what is today's Austria and which officially lasted from 1804 to 1867. It was followed by the Empire of Austria-Hungary, whose proclamation was a diplomatic move that elevated Hungary's status within the Austrian Empire...
, to which it remained until it was joined to the Kingdom of Italy in 1866.

It was besieged by Austria
Austria
Austria , officially the Republic of Austria , is a landlocked country of roughly 8.4 million people in Central Europe. It is bordered by the Czech Republic and Germany to the north, Slovakia and Hungary to the east, Slovenia and Italy to the south, and Switzerland and Liechtenstein to the...
during World War I
World War I
World War I , which was predominantly called the World War or the Great War from its occurrence until 1939, and the First World War or World War I thereafter, was a major war centred in Europe that began on 28 July 1914 and lasted until 11 November 1918...
.

Outside the city are:

Newbury
Newbury, Berkshire
Newbury is a civil parish and the principal town in the west of the county of Berkshire in England. It is situated on the River Kennet and the Kennet and Avon Canal, and has a town centre containing many 17th century buildings. Newbury is best known for its racecourse and the adjoining former USAF...
, England
England
England is a country that is part of the United Kingdom. It shares land borders with Scotland to the north and Wales to the west; the Irish Sea is to the north west, the Celtic Sea to the south west, with the North Sea to the east and the English Channel to the south separating it from continental...
Braunfels
Braunfels
Braunfels is a town in the Lahn-Dill-Kreis in Hesse, Germany. It is located on the German Framework Road.- Location :The climatic spa of Braunfels lies at a height of some 100 m above the Lahn valley...
, Germany
Germany
Germany , officially the Federal Republic of Germany , is a federal parliamentary republic in Europe. The country consists of 16 states while the capital and largest city is Berlin. Germany covers an area of 357,021 km2 and has a largely temperate seasonal climate...
Carcaixent
Carcaixent
Carcaixent is a town and municipality in the province of Valencia, eastern Spain, with c. 20,000 inhabitants. Its origins go back to prehistoric Iberian and Roman times, with some remainders in its area. It is located in the Ribera Alta comarca, 40 km south of the provincial capital...
, Spain
Spain
Spain , officially the Kingdom of Spain languages]] under the European Charter for Regional or Minority Languages. In each of these, Spain's official name is as follows:;;;;;;), is a country and member state of the European Union located in southwestern Europe on the Iberian Peninsula...
Eeklo
Eeklo
Eeklo is a Belgian municipality in the Flemish province of East Flanders. The municipality only comprises the city of Eeklo proper. The name Eeklo comes from the contraction of “eke” and “lo”, two Old German words meaning “oak” and “sparse woods”....
, Belgium
Belgium
Belgium , officially the Kingdom of Belgium, is a federal state in Western Europe. It is a founding member of the European Union and hosts the EU's headquarters, and those of several other major international organisations such as NATO.Belgium is also a member of, or affiliated to, many...
Bagnols-sur-Cèze
Bagnols-sur-Cèze
Bagnols-sur-Cèze is a commune in the Gard department in the Languedoc-Roussillon région in southern France.-History:A small regional center, Bagnols-sur-Cèze was quite certainly a Roman town before the main part was built in the 13th century around a central arcaded square that is still preserved...
, France
France
The French Republic , The French Republic , The French Republic , (commonly known as France , is a unitary semi-presidential republic in Western Europe with several overseas territories and islands located on other continents and in the Indian, Pacific, and Atlantic oceans. Metropolitan France...
Kiskunfélegyháza
Kiskunfélegyháza
Kiskunfélegyháza is a town in the Bács-Kiskun county in southern Hungary, 130 kilometres southeast of Budapest by rail.Among the principal buildings are a fine Art Nouveau town hall, a Roman Catholic high school and a modern large parish church. The surrounding country is covered with vineyards,...
, Hungary
Hungary
Hungary , officially the Republic of Hungary , is a landlocked country in Central Europe. It is situated in the Carpathian Basin and is bordered by Slovakia to the north, Ukraine and Romania to the east, Serbia and Croatia to the south, Slovenia to the southwest and Austria to the west. The...