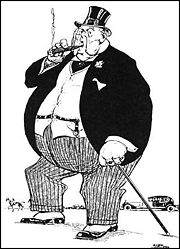 Fat cat is a political term originally describing a rich political donor
Donation
A donation is a gift given by physical or legal persons, typically for charitable purposes and/or to benefit a cause. A donation may take various forms, including cash, services, new or used goods including clothing, toys, food, and vehicles...
, also called an angel or big money man.

The New York Times has described fat cats as symbols of "a deeply corrupt campaign finance system riddled with loopholes", with Americans seeing them as recipients of the "perks of power", but able to "buy access, influence policy and even veto appointments."

It is also commonly used to describe a rich
Rich
Rich may refer to wealth. Rich may also refer to:- Organizations :* B.C. Rich, guitar manufacturer* Rich Products, international food products corporation* Rich's, U.S. department store retail chain in the southern U.S....
, greed
Greed
Greed is an excessive desire to possess wealth, goods, or abstract things of value with the intention to keep it for one's self. Greed is inappropriate expectation...
y person who, due to ownership of large amounts of capital
Capital (economics)
In economics, capital, capital goods, or real capital refers to already-produced durable goods used in production of goods or services. The capital goods are not significantly consumed, though they may depreciate in the production process...
, is able to "live easy" off the work of others.

The word was first used in the 1920s in the United States
United States
The United States of America is a federal constitutional republic comprising fifty states and a federal district...
to describe rich political donor
Donation
A donation is a gift given by physical or legal persons, typically for charitable purposes and/or to benefit a cause. A donation may take various forms, including cash, services, new or used goods including clothing, toys, food, and vehicles...
s.

The term's coinage for political purposes has been attributed to Frank Kent
Frank Kent
Frank Richardson Kent was an American journalist and political theorist of the 1920s and 1930s. Although a Democrat, by the 1930s he was one of the leading conservative critics of the New Deal of Franklin D...
, a writer for the Baltimore Sun whose essay "Fat Cats and Free Rides" appeared in the American Mercury, a magazine of commentary run by H. L. Mencken
H. L. Mencken
Henry Louis "H. L." Mencken was an American journalist, essayist, magazine editor, satirist, acerbic critic of American life and culture, and a scholar of American English. Known as the "Sage of Baltimore", he is regarded as one of the most influential American writers and prose stylists of the...
. Kent wrote:
The 1960 campaign for the Democratic
Democratic Party (United States)
The Democratic Party is one of two major contemporary political parties in the United States, along with the Republican Party. The party's socially liberal and progressive platform is largely considered center-left in the U.S. political spectrum. The party has the lengthiest record of continuous...
nomination to the presidency was marked by competition between fellow Senators
United States Senate
The United States Senate is the upper house of the bicameral legislature of the United States, and together with the United States House of Representatives comprises the United States Congress. The composition and powers of the Senate are established in Article One of the U.S. Constitution. Each...
Hubert Humphrey
Hubert Humphrey
Hubert Horatio Humphrey, Jr. , served under President Lyndon B. Johnson as the 38th Vice President of the United States. Humphrey twice served as a United States Senator from Minnesota, and served as Democratic Majority Whip. He was a founder of the Minnesota Democratic-Farmer-Labor Party and...
and John F. Kennedy
John F. Kennedy
John Fitzgerald "Jack" Kennedy , often referred to by his initials JFK, was the 35th President of the United States, serving from 1961 until his assassination in 1963....
. Their first meeting was in the Wisconsin primary, where Kennedy's well-organized and well-funded campaign defeated Humphrey's energetic but poorly-funded effort. Humphrey objected to the media, "The Kennedy forces are waging a psychological blitz that I cannot match. I'm not the candidate of the fat cats....".

A 1972 book by sociologist G. William Domhoff
G. William Domhoff
George William Domhoff is a research professor in psychology and sociology at the University of California, Santa Cruz...
, titled Fat Cats and Democrats, contrasted the Democratic Party's
Democratic Party (United States)
The Democratic Party is one of two major contemporary political parties in the United States, along with the Republican Party. The party's socially liberal and progressive platform is largely considered center-left in the U.S. political spectrum. The party has the lengthiest record of continuous...
perceived populism
Populism
Populism can be defined as an ideology, political philosophy, or type of discourse. Generally, a common theme compares "the people" against "the elite", and urges social and political system changes. It can also be defined as a rhetorical style employed by members of various political or social...
with its funding structure. In Domhoff's view, "Short of a nationwide system of public financing for candidates ... it seems likely that wealthy fat cats will find one way or another to finance the candidates of their choice."

The campaign finance reform
Campaign finance reform
Campaign finance reform is the common term for the political effort in the United States to change the involvement of money in politics, primarily in political campaigns....
s following the Watergate scandal
Watergate scandal
The Watergate scandal was a political scandal during the 1970s in the United States resulting from the break-in of the Democratic National Committee headquarters at the Watergate office complex in Washington, D.C., and the Nixon administration's attempted cover-up of its involvement...
greatly reduced the amount of money that individuals could contribute to a political campaign. In the words of Ben J. Wattenberg
Ben J. Wattenberg
Benjamin J. Wattenberg is an American conservative commentator and writer.-Early years:Wattenberg was born in The Bronx, New York, to Jewish parents, and went on to graduate from Hobart College in 1955, majoring in English. From 1955 to 1957 he was in the U.S. Air Force, based in San Antonio. He...
, "The fat cats were driven from the temple...."

During a 1997 $1,000-per-plate dinner at the Hilton Washington
Hilton Washington
The Hilton Washington is a hotel in Washington, D.C. It is located at 1919 Connecticut Avenue, N.W., roughly at the boundaries of the Kalorama, Dupont Circle, and Adams Morgan neighborhoods.Developed by Uris Brothers and built in 1965 in a double-arched design, the hotel long sported the largest...
for the Republican Party
Republican Party (United States)
The Republican Party is one of the two major contemporary political parties in the United States, along with the Democratic Party. Founded by anti-slavery expansion activists in 1854, it is often called the GOP . The party's platform generally reflects American conservatism in the U.S...
, which the New York Times dubbed "a lucrative display of the resilience of big-money campaign fund-raising", street protesters calling for further reform dressed in "fat cat" costumes and chanted "Hey, hey, ho, ho! Corporate fat cats have to go!" In the 2008 Democratic race
Democratic Party (United States) presidential primaries, 2008
The 2008 Democratic presidential primaries were the selection process by which voters of the Democratic Party chose its nominee for President of the United States in the 2008 U.S. presidential election...
, a group of wealthy backers of Sen. Hillary Clinton wrote to Speaker of the House
Speaker of the United States House of Representatives
The Speaker of the United States House of Representatives, or Speaker of the House, is the presiding officer of the United States House of Representatives...
Nancy Pelosi
Nancy Pelosi
Nancy Patricia D'Alesandro Pelosi is the Minority Leader of the United States House of Representatives and served as the 60th Speaker of the United States House of Representatives from 2007 to 2011...
, warning her they might withdraw financial support for the Democratic Congressional Campaign Committee
Democratic Congressional Campaign Committee
The Democratic Congressional Campaign Committee is the Democratic Hill committee for the United States House of Representatives, working to elect Democrats to that body. They play a critical role in recruiting candidates, raising funds, and organizing races in districts that are expected to yield...
if Pelosi did not change her position on whether the party's superdelegate
Superdelegate
"Superdelegate" is an informal term commonly used for some of the delegates to the Democratic National Convention, the presidential nominating convention of the United States Democratic Party....
s "should support the party's pledged delegate leader". According to the Center for Responsive Politics
Center for Responsive Politics
The Center for Responsive Politics is a non-profit, nonpartisan research group based in Washington, D.C. that tracks money in politics and the effect of money and lobbying activity on elections and public policy and maintains a public online database of its information.Their database...
, the signers included donors such as Haim Saban
Haim Saban
Haim Saban is an Egyptian born Israeli-American television and media proprietor. With an estimated net worth of $3.5 billion, he is ranked by Forbes as the 104th richest person in America.-Biography:...
and Robert L. Johnson
Robert L. Johnson
Robert L. Johnson is an American business magnate best known for being the founder of television network Black Entertainment Television , and is also its former chairman and chief executive officer...
, and had given the party nearly $24 million since 2000. In response, the grassroots
Grassroots
A grassroots movement is one driven by the politics of a community. The term implies that the creation of the movement and the group supporting it are natural and spontaneous, highlighting the differences between this and a movement that is orchestrated by traditional power structures...
liberal political action committee
Political action committee
In the United States, a political action committee, or PAC, is the name commonly given to a private group, regardless of size, organized to elect political candidates or to advance the outcome of a political issue or legislation. Legally, what constitutes a "PAC" for purposes of regulation is a...
MoveOn
MoveOn
MoveOn is an American non-profit, progressive or liberal public policy advocacy group and political action committee, which has raised millions of dollars for candidates it identifies as "moderates" or "progressives" in the United States. It was formed in 1998 in response to the impeachment of...
called the move "the worst kind of insider politics -- billionaires bullying our elected leaders into ignoring the will of the voters," but reassured members that "when we all pool our resources, together we're stronger than the fat cats."


Use in culture and imagery

The word has since acquired a meaning of a rich, powerful person of possibly 'undeserved' wealth. It is now commonly used in editorial cartoon
Editorial cartoon
An editorial cartoon, also known as a political cartoon, is an illustration containing a commentary that usually relates to current events or personalities....
s.
In the British printed media, a fat cat is usually depicted as a cat-faced, clad in a pin striped suit
Pin stripes
Pinstripes are a pattern of very thin stripes of any color running in parallel found in cloth. The pinstriped suit has become associated with conservative business attire, although many designers now produce fashionable pinstripe patterns for fashion-conscious consumers...
corpulent middle-aged man holding or smoking a thick cigar
Cigar
A cigar is a tightly-rolled bundle of dried and fermented tobacco that is ignited so that its smoke may be drawn into the mouth. Cigar tobacco is grown in significant quantities in Brazil, Cameroon, Cuba, the Dominican Republic, Honduras, Indonesia, Mexico, Nicaragua, Philippines, and the Eastern...
representing a venal banker or a high earner executive or "captain of industry
Captain of industry
"Captain of industry" was a term originally used in the United Kingdom during the Industrial Revolution describing a business leader whose means of amassing a personal fortune contributes positively to the country in some way....
".