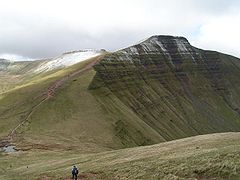 The Fan Dance is part of the Fitness and Navigation phase of the selection
United Kingdom Special Forces Selection
United Kingdom Special Forces Selection is the selection and training process for members of the United Kingdom's three Special Forces formations: 22 Special Air Service, Special Boat Service, and Special Reconnaissance Regiment...
process of the UK's
United Kingdom
The United Kingdom of Great Britain and Northern IrelandIn the United Kingdom and Dependencies, other languages have been officially recognised as legitimate autochthonous languages under the European Charter for Regional or Minority Languages...
Special Forces
United Kingdom Special Forces
The United Kingdom Special Forces is a UK Ministry of Defence Directorate which also has the capability to provide a Joint Special Operations Task Force Headquarters...
personnel. It has also been used on courses run by the Pathfinder Group and the Infantry Battle School, Brecon
Brecon
Brecon is a long-established market town and community in southern Powys, Mid Wales, with a population of 7,901. It was the county town of the historic county of Brecknockshire; although its role as such was eclipsed with the formation of Powys, it remains an important local centre...
, Wales
Wales
Wales is a country that is part of the United Kingdom and the island of Great Britain, bordered by England to its east and the Atlantic Ocean and Irish Sea to its west. It has a population of three million, and a total area of 20,779 km²...
. It is a 24 kilometre
Kilometre
The kilometre is a unit of length in the metric system, equal to one thousand metres and is therefore exactly equal to the distance travelled by light in free space in of a second...
long distance march
Yomp
Yomp is Royal Marines slang describing a long distance march carrying full kit.British Army slang for the same thing is 'tab'. The term 'tab' has its roots in an acronym, being an abbreviation of Tactical Advance to Battle...
in the Brecon Beacons
Brecon Beacons
The Brecon Beacons is a mountain range in South Wales. In a narrow sense, the name refers to the range of popular peaks south of Brecon, including South Wales' highest mountain, Pen y Fan, and which together form the central section of the Brecon Beacons National Park...
of Wales that takes place at the end of the first week of the selection course. It is used as the first major indicator of whether a candidate has the physical and mental determination to complete the selection course.

The candidates are divided into two groups and each starts from opposite sides of Pen y Fan
Pen y Fan
Pen y Fan is the highest peak in South Wales and southern Britain, situated in the Brecon Beacons National Park. At above sea-level, it is also the highest peak in Britain south of the Snowdonia mountain range...
, an 886 metre
Metre
The metre , symbol m, is the base unit of length in the International System of Units . Originally intended to be one ten-millionth of the distance from the Earth's equator to the North Pole , its definition has been periodically refined to reflect growing knowledge of metrology...
high peak. One group starts at Torpantau Station, the other at the Storey Arms Mountain Rescue Centre. Each carrying a 18 kilogramme Bergen backpack
Backpack
A backpack is, in its simplest form, a cloth sack carried on one's back and secured with two straps that go over the shoulders, but there can be exceptions...
, a rifle (a further five kg) and a water bottle. The candidates climb Pen y Fan and descend on the far side, they then turn around and reverse the route. The Fan Dance is distinct from the Long Drag
Long Drag
The Long Drag is a slang term which refers to an event that marks the culmination of the Fitness and Navigation phase of UK Special Forces Selection and the Pathfinder Platoon cadre. The event, also known simply as Endurance, involves a 64 kilometre long distance march over the Brecon Beacons of...
, a 64 km march with a 25 kg backpack that is the culminating event of the Fitness and Navigation phase of the selection course.

The time allotted for the Fan Dance is four hours.