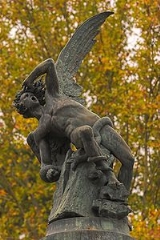 Overview
Fallen angel is a concept developed in Jewish mythology
Jewish mythology
Jewish mythology is generally the sacred and traditional narratives that help explain and symbolize the Jewish religion, whereas Jewish folklore consists of the folk tales and legends that existed in the general Jewish culture. There is very little early folklore distinct from the aggadah literature...
from interpretation of the Book of Enoch
Book of Enoch
The Book of Enoch is an ancient Jewish religious work, traditionally ascribed to Enoch, the great-grandfather of Noah. It is not part of the biblical canon as used by Jews, apart from Beta Israel...
. The actual term fallen angel is not found in either the Hebrew Bible
Hebrew Bible
The Hebrew Bible is a term used by biblical scholars outside of Judaism to refer to the Tanakh , a canonical collection of Jewish texts, and the common textual antecedent of the several canonical editions of the Christian Old Testament...
or the New Testament
New Testament
The New Testament is the second major division of the Christian biblical canon, the first such division being the much longer Old Testament....
. Christians adopted the concept of fallen angels mainly based on their interpretations of the Book of Revelation
Book of Revelation
The Book of Revelation is the final book of the New Testament. The title came into usage from the first word of the book in Koine Greek: apokalupsis, meaning "unveiling" or "revelation"...
Chapter 12. Fallen angels are identified with the Watchers, as well as the angels who are cast down to the earth from the War in Heaven, and ha-satan.
The mention of the "sons of God
Sons of God
Sons of God is a phrase used in Levantine Bronze and Iron Age texts to describe the "divine council" of the major gods.- The term "sons of God" :...
" in ("The sons of God saw that the daughters of man were attractive.

Is there a different story not related to the christian belief about fallen angels?

How do we know if fallen angels excist?