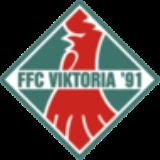 Encyclopedia
Frankfurter FC Viktoria is a German association football club
Football in Germany
Association football is the most popular sport in Germany. The German Football Association is the sport's national governing body, with 6.6 million members organized in over 26,000 football clubs. There is a league system, with the 1. and 2. Bundesliga on top, and the winner of the first...
based in Frankfurt (Oder)
Frankfurt (Oder)
Frankfurt is a town in Brandenburg, Germany, located on the Oder River, on the German-Polish border directly opposite the town of Słubice which was a part of Frankfurt until 1945. At the end of the 1980s it reached a population peak with more than 87,000 inhabitants...
, Brandenburg
Brandenburg
Brandenburg is one of the sixteen federal-states of Germany. It lies in the east of the country and is one of the new federal states that were re-created in 1990 upon the reunification of the former West Germany and East Germany. The capital is Potsdam...
. The club was originally founded in East Germany as the army club SV Vorwärts der HVA Leipzig (then SV Vorwärts der KVP Leipzig) in 1951 in the city of Leipzig
Leipzig
Leipzig Leipzig has always been a trade city, situated during the time of the Holy Roman Empire at the intersection of the Via Regia and Via Imperii, two important trade routes. At one time, Leipzig was one of the major European centres of learning and culture in fields such as music and publishing...
.

One of the characteristics of East German football after World War II, under the Russian occupation and socialist East German regime, was the willingness of the ruling authorities to manipulate teams in various ways for political or other reasons. In 1953, the club was picked up and moved to East Berlin
Berlin
Berlin is the capital city of Germany and is one of the 16 states of Germany. With a population of 3.45 million people, Berlin is Germany's largest city. It is the second most populous city proper and the seventh most populous urban area in the European Union...
to play as ZSK Vorwärts Berlin. In October 1956, they were re-named ZASK Vorwärts Berlin, and in February 1957, ASK Vorwärts Berlin.

With the 1954 season, the club began a run of success that included an FDGB-Pokal (East German Cup) that year, East German championships in 1958, 1960, 1962, and 1965, as well as losing appearances in the 1956 FDGB-Pokal, and the 1957 and 1959 national finals. Their success continued after the club was again re-named, this time as FC Vorwärts Berlin, one of the new centralized football clubs
Football club (GDR)
Football club was a designation for the elite football teams in the GDR . They were formed in the mid-1960s as centers of high-level football....
formed to increase the level of performance throughout the country. Vorwärts won another two championships (1966, 1969) and in 1970 again took the FDGB-Pokal, but made a losing appearance in the national final. Throughout the entire period from 1951–71 the side played in the DDR Oberliga (I).

In 1971, the club was picked up and moved again, this time from the capital to Frankfurt (Oder) on the German-Polish
Poland
Poland , officially the Republic of Poland , is a country in Central Europe bordered by Germany to the west; the Czech Republic and Slovakia to the south; Ukraine, Belarus and Lithuania to the east; and the Baltic Sea and Kaliningrad Oblast, a Russian exclave, to the north...
border, to replace the local secret police-sponsored side SG Dynamo, which was then disbanded. Vorwärts then enjoyed another decent run in the 1980s, going to the UEFA Cup
UEFA Cup
The UEFA Europa League is an annual association football cup competition organised by UEFA since 1971 for eligible European football clubs. It is the second most prestigious European club football contest after the UEFA Champions League...
four times (where they were twice knocked out by West German clubs, (Werder Bremen and VfB Stuttgart
VfB Stuttgart
Verein für Bewegungsspiele Stuttgart 1893 e. V., commonly known as VfB Stuttgart, is a German sports club based in Stuttgart, Baden-Württemberg. The club is best known for its football team, which has participated in all but two Bundesliga seasons...
). In 1983 they finished second nationally.

After German reunification
German reunification
German reunification was the process in 1990 in which the German Democratic Republic joined the Federal Republic of Germany , and when Berlin reunited into a single city, as provided by its then Grundgesetz constitution Article 23. The start of this process is commonly referred by Germans as die...
in 1990, the club dropped its affiliation with the army and became FC Victoria Frankfurt/Oder. After financial problems and re-organization in 1993 the side emerged as Frankfurter FC Viktoria (FFC Viktoria 91). In the early 1990s, they played a couple of seasons in tier III before slipping to division IV and V level play. The side currently plays in the Brandenburg-Liga (VI).