Encyclopedia
Evonik Industries is an industrial corporation in Germany
Germany
Germany , officially the Federal Republic of Germany , is a federal parliamentary republic in Europe. The country consists of 16 states while the capital and largest city is Berlin. Germany covers an area of 357,021 km2 and has a largely temperate seasonal climate...
owned by RAG Foundation and one of the world´s leading specialty chemicals companies. It was created on 12 September 2007 as a result of restructuring
Restructuring
Restructuring is the corporate management term for the act of reorganizing the legal, ownership, operational, or other structures of a company for the purpose of making it more profitable, or better organized for its present needs...
of the mining and technology group RAG
RAG Aktiengesellschaft
RAG AG, formerly Ruhrkohle AG, is the largest German coal mining corporation. The company headquarters are in Herne in the Ruhr area. The company was founded on 27 November 1968, consolidating several coalmining corporations into the Ruhrkohle AG....
. Evonik Industries united the business areas of chemicals, energy
Energy
In physics, energy is an indirectly observed quantity. It is often understood as the ability a physical system has to do work on other physical systems...
and real estate
Real estate
In general use, esp. North American, 'real estate' is taken to mean "Property consisting of land and the buildings on it, along with its natural resources such as crops, minerals, or water; immovable property of this nature; an interest vested in this; an item of real property; buildings or...
of RAG, while mining operations continue to be carried out by RAG. Since then, the energy and real estate business areas have been divested, with a minority share in the former and a majority share in the latter still being held. Its chemicals business already generates more than 80% of sales in areas in which it ranks among the market leaders. Evonik Industries employs about 34,000 people and carries out activities in more than 100 countries. The operating activities are organized into six business units which are a part of the chemicals business area. Evonik is the main sponsor of Borussia Dortmund.


Founding of the company

Historically Evonik Industries' businesses were part of RAG activities. The idea of splitting the company was put forward in 2005. The background of this idea was that RAG's core business of coal mining is carried out under government contract in Germany, while businesses transferred to Evonik compete on international markets. This structure did not permit the payment of dividends to the shareholders, which limited shareholders' readiness to inject equity into the RAG, which restricted the company's ability to access fresh capital. As the first step, RAG’s shareholders sold their shares to RAG foundation (RAG-Stiftung) to split RAG. The Foundation was established on 10 July 2007 and Evonik Industries was created on 12 September 2007.

The original plan foresaw IPO
Initial public offering
An initial public offering or stock market launch, is the first sale of stock by a private company to the public. It can be used by either small or large companies to raise expansion capital and become publicly traded enterprises...
of Evonik Industries in the first half of 2008. However, this plan was postponed until mid-2010 at the earliest and the RAG Foundation started to look for strategic investors, while still holding on to the plans for midterm IPO. In June 2008, the private equity firm CVC Capital Partners
CVC Capital Partners
CVC Capital Partners is one of the top five largest private equity firms globally with approximately US$46 billion in funds focused on management buyouts...
bought a stake of 25.01% in the company. Among many other private equity investors who bid for the stake (amongst them Blackstone Group
Blackstone Group
The Blackstone Group L.P. is an American-based alternative asset management and financial services company that specializes in private equity, real estate, and credit and marketable alternative investment strategies, as well as financial advisory services, such as mergers and acquisitions ,...
and 3i
3i
3i Group plc is a multinational private equity and venture capital company headquartered in London, United Kingdom. It has offices in 13 countries across Asia, Europe and the Americas and had total assets under management of £12.7 billion as at 31 March 2011...
), Russian Gazprom
Gazprom
Open Joint Stock Company Gazprom is the largest extractor of natural gas in the world and the largest Russian company. Its headquarters are in Cheryomushki District, South-Western Administrative Okrug, Moscow...
was reported to have considered buying a stake in Evonik Industries. The IPO, by now planned for fall of 2011, was once again postponed in September 2011, this time citing the "current state of financial and capital markets and their prospects."

Finally, since 2008 the ownership structure of the Evonik Industries AG is composed as follows:

In 2006 RAG acquired Degussa AG, which was later renamed Evonik-Degussa GmbH. In 1998, Degussa instructed the American historian Peter Hayes to clarify the company history during the Third Reich. One of the former subsidiaries of Degussa, the Degesch
Degesch
The Deutsche Gesellschaft für Schädlingsbekämpfung mbH , in short Degesch, was a German chemical corporation during World War II. Degesch produced pesticides used against weeds and insects...
(translation: German Corporation for Pest control), was the main manufacturer and distributor of the chemical Zyklon B
Zyklon B
Zyklon B was the trade name of a cyanide-based pesticide infamous for its use by Nazi Germany to kill human beings in gas chambers of extermination camps during the Holocaust. The "B" designation indicates one of two types of Zyklon...
, which was used to execute people in gas chambers of German death camps during the Holocaust. Degussa had also processed gold dental fillings removed from the mouths of death-camp inmates.

The historical significance of Degussa appeared again in the publicity during their involvement in the building of the Holocaust Memorial
Memorial to the Murdered Jews of Europe
The Memorial to the Murdered Jews of Europe , also known as the Holocaust Memorial , is a memorial in Berlin to the Jewish victims of the Holocaust, designed by architect Peter Eisenman and engineer Buro Happold. It consists of a site covered with 2,711 concrete slabs or "stelae", arranged in a...
in Berlin
Berlin
Berlin is the capital city of Germany and is one of the 16 states of Germany. With a population of 3.45 million people, Berlin is Germany's largest city. It is the second most populous city proper and the seventh most populous urban area in the European Union...
, because the plasticizer
Plasticizer
Plasticizers or dispersants are additives that increase the plasticity or fluidity of the material to which they are added; these include plastics, cement, concrete, wallboard, and clay. Although the same compounds are often used for both plastics and concretes the desired effects and results are...
and the anti-graffiti coating were produced by Degussa. Therefore, the work on the memorial was interrupted to clarify the situation. In November 2003, the trustees decided to finish the building with the involvement of Degussa.

After concentrating operations to the holding's core the former business areas Energy and Real Estate are now mere financial investments, leaving the chemical business area of Evonik as the only one operated by Evonik Industries.

The Chemicals Business Area of Evonik emerged from Evonik Degussa GmbH (formerly Degussa GmbH — an acronym of Deutsche Gold- und Silber-Scheide-Anstalt (German Gold and Silver Metals Separating Works)) based in Essen
Essen
- Origin of the name :In German-speaking countries, the name of the city Essen often causes confusion as to its origins, because it is commonly known as the German infinitive of the verb for the act of eating, and/or the German noun for food. Although scholars still dispute the interpretation of...
, Germany. It employs about 34,000 people and is one of the world's largest producers of specialty chemicals. It includes six business units: Advanced Intermediates, Consumer Specialities, Coatings & Additives, Inorganic Materials, Health & Nutrition and Performance Polymers. Degussa was acquired by RAG in 2006.
Latest acquisition: Tippecanoe Labs plant site at Lafayette Indiana from Eli Lilly 1 January 2010 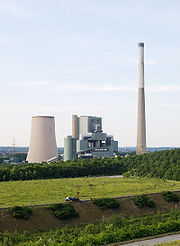 The energy business portion of Evonik is operated through Evonik Steag GmbH (formerly STEAG), which is the fifth largest power company in Germany, based in Essen
Essen
- Origin of the name :In German-speaking countries, the name of the city Essen often causes confusion as to its origins, because it is commonly known as the German infinitive of the verb for the act of eating, and/or the German noun for food. Although scholars still dispute the interpretation of...
. The company operates eleven hard coal-fired power plants, of which nine are located in Germany
Germany
Germany , officially the Federal Republic of Germany , is a federal parliamentary republic in Europe. The country consists of 16 states while the capital and largest city is Berlin. Germany covers an area of 357,021 km2 and has a largely temperate seasonal climate...
, and one in Turkey
Turkey
Turkey , known officially as the Republic of Turkey , is a Eurasian country located in Western Asia and in East Thrace in Southeastern Europe...
, Colombia
Colombia
Colombia, officially the Republic of Colombia , is a unitary constitutional republic comprising thirty-two departments. The country is located in northwestern South America, bordered to the east by Venezuela and Brazil; to the south by Ecuador and Peru; to the north by the Caribbean Sea; to the...
and Philippines
Philippines
The Philippines , officially known as the Republic of the Philippines , is a country in Southeast Asia in the western Pacific Ocean. To its north across the Luzon Strait lies Taiwan. West across the South China Sea sits Vietnam...
, and two industrial power plants. It operates also in the field of transport, processing and distribution of hard coal, coke and byproducts from coal processing, as also in the field of gas supply, transport and trading. In December 2010 Evonik Industries signed an agreement to sell 51% of shares in its energy business to a consortium of municipal utilities in Germany´s Rhine-Ruhr
Rhine-Ruhr
The Rhine-Ruhr metropolitan region is the largest metropolitan region in Germany with about 10,100,000 inhabitants. It is of polycentric nature and the only megacity in Germany. It covers an area of 7,110 square kilometers and lies entirely within the federal state of North Rhine-Westphalia...
region. The agreement was finalized on March 2, 2011. Evonik will be selling its remaining stake to this majority partner within five years.

In 2008, Evonik Industries developed its Corporate Responsibility
Corporate social responsibility
Corporate social responsibility is a form of corporate self-regulation integrated into a business model...
(CR) strategy as an inherent part of the corporate strategy and corporate culture. Three principles constitute the basic modules of the company´s CR:
Evonik Industries is a member of the United Nations Global Compact. Furthermore, the company is committed to the Responsible Care
Responsible Care
Responsible Care is a global, voluntary initiative developed autonomously by the chemical industry for the chemical industry - it is run in 52 countries whose combined chemical industries account for nearly 90% of global chemicals production....
initiative to constantly improve the company´s performance in health, security, environment and product stewardship. The annual CR report of Evonik Industries is based on the standards of the Global Reporting Initiative
Global Reporting Initiative
The Global Reporting Initiative produces one of the world's most prevalent standards for sustainability reporting - also known as ecological footprint reporting, Environmental Social Governance reporting, Triple Bottom Line reporting, Corporate Social Responsibility reporting...
.