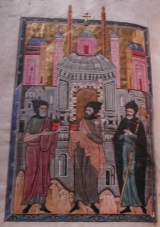 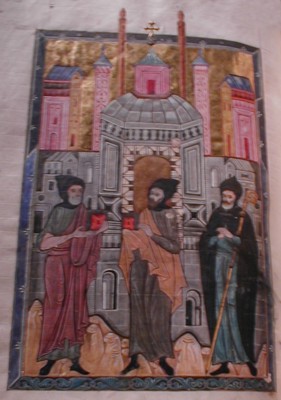 Evagrius Ponticus also called Evagrius the Solitary (345-399 AD) was a Christian monk and ascetic. One of the rising stars in the late fourth century church, he was well-known as a keen thinker, a polished speaker, and a gifted writer. He left a promising ecclesiastical career in Constantinople, traveled to Jerusalem, and there in 383 became a monk at the monastery of Rufinus
Tyrannius Rufinus
Tyrannius Rufinus or Rufinus of Aquileia was a monk, historian, and theologian. He is most known as a translator of Greek patristic material into Latin—especially the work of Origen.-Life:...
and Melania the Elder
Melania the Elder
Saint Melania the Elder or Maior was a Desert Mother who was an influential figure in the Christian ascetic movement that sprang up in the generation after the Emperor Constantine made Christianity the official religion of the Roman Empire...
. He then went to Egypt and spent the remaining years of his life in Nitria and Kellia
Kellia
Kellia, known as "the Cells", and referred to as "the innermost desert", was a 4th century Egyptian Christian monastic community located about 12 miles south of the Nitrian Desert.-Overview:Founded in 338 C.E...
, marked by years of asceticism and writing. He was a disciple of several influential contemporary church leaders, including Basil of Caesarea
Basil of Caesarea
Basil of Caesarea, also called Saint Basil the Great, was the bishop of Caesarea Mazaca in Cappadocia, Asia Minor . He was an influential 4th century Christian theologian...
, Gregory of Nazianzus
Gregory of Nazianzus
Gregory of Nazianzus was a 4th-century Archbishop of Constantinople. He is widely considered the most accomplished rhetorical stylist of the patristic age...
, and Macarius of Egypt
Macarius of Egypt
Macarius of Egypt was an Egyptian Christian monk and hermit. He is also known as Macarius the Elder, Macarius the Great and The Lamp of the Desert.-Life:...
. He was teacher of others, including John Cassian and Palladius
Palladius of Galatia
Palladius of Galatia was bishop of Helenopolis in Bithynia, and a devoted disciple of Saint John Chrysostom. He is best remembered for his work, the Lausiac History; he was also, in all probability, the author of the Dialogue on the Life of Chrysostom....
.

He was born into a Christian family in the small town of Ibora, in the Roman province of Pontus
Pontus
Pontus or Pontos is a historical Greek designation for a region on the southern coast of the Black Sea, located in modern-day northeastern Turkey. The name was applied to the coastal region in antiquity by the Greeks who colonized the area, and derived from the Greek name of the Black Sea: Πόντος...
. He was educated in Neocaesarea
Neocaesarea, Pontus (titular see)
Neocaesarea is a Catholic titular see. The original diocese was in Pontus Polemoniacus, at first called Cabira. It corresponds to present-day Niksar, Turkey.-History:...
, where he began his career in the church as a lector under Basil. Around 380 he joined Gregory of Nazianzus in Constantinople
Constantinople
Constantinople was the capital of the Roman, Eastern Roman, Byzantine, Latin, and Ottoman Empires. Throughout most of the Middle Ages, Constantinople was Europe's largest and wealthiest city.-Names:...
, where he was promoted to deacon
Deacon
Deacon is a ministry in the Christian Church that is generally associated with service of some kind, but which varies among theological and denominational traditions...
and eventually to archdeacon
Archdeacon
An archdeacon is a senior clergy position in Anglicanism, Syrian Malabar Nasrani, Chaldean Catholic, and some other Christian denominations, above that of most clergy and below a bishop. In the High Middle Ages it was the most senior diocesan position below a bishop in the Roman Catholic Church...
. When Emperor Theodosius I
Theodosius I
Theodosius I , also known as Theodosius the Great, was Roman Emperor from 379 to 395. Theodosius was the last emperor to rule over both the eastern and the western halves of the Roman Empire. During his reign, the Goths secured control of Illyricum after the Gothic War, establishing their homeland...
convened the Second Ecumenical Council
First Council of Constantinople
The First Council of Constantinople is recognized as the Second Ecumenical Council by the Assyrian Church of the East, the Oriental Orthodox, the Eastern Orthodox, the Roman Catholics, the Old Catholics, and a number of other Western Christian groups. It was the first Ecumenical Council held in...
in 381 AD, Evagrius was present, despite Gregory's premature departure.

According to the biography written by Palladius, Constantinople offered many worldly attractions, and Evagrius's vanity was aroused by the high praise of his peers. Eventually, he became infatuated with a married woman. Amid this temptation, he is said to have had a vision in which he was imprisoned by the soldiers of the governor at the request of the woman's husband. This vision, and the warning of an attendant angel, made him flee from the capital and head for Jerusalem.

For a short time, he stayed with Melania the Elder
Melania the Elder
Saint Melania the Elder or Maior was a Desert Mother who was an influential figure in the Christian ascetic movement that sprang up in the generation after the Emperor Constantine made Christianity the official religion of the Roman Empire...
and Tyrannius Rufinus
Tyrannius Rufinus
Tyrannius Rufinus or Rufinus of Aquileia was a monk, historian, and theologian. He is most known as a translator of Greek patristic material into Latin—especially the work of Origen.-Life:...
in a monastery near Jerusalem, but even there he could not forsake his vainglory and pride. He fell gravely ill and only after he resolved to become a monk was he restored to health. After being made a monk at Jerusalem in 383, he joined a cenobitic
Cenobitic
Cenobitic monasticism is a monastic tradition that stresses community life. Often in the West, the community belongs to a religious order and the life of the cenobitic monk is regulated by a religious rule, a collection of precepts...
community of monks in Nitria, but after some years moved to Kellia
Kellia
Kellia, known as "the Cells", and referred to as "the innermost desert", was a 4th century Egyptian Christian monastic community located about 12 miles south of the Nitrian Desert.-Overview:Founded in 338 C.E...
. There he spent the last fourteen years of his life pursuing studies under Macarios the Great
Macarius of Egypt
Macarius of Egypt was an Egyptian Christian monk and hermit. He is also known as Macarius the Elder, Macarius the Great and The Lamp of the Desert.-Life:...
and Macarius of Alexandria
Macarius of Alexandria
Saint Macarius of Alexandria was a monk in the Nitrian Desert. He was a slightly younger contemporary of Macarius of Egypt, and is thus also known as Macarius the Younger. He was also known as ho politikos. He was an extreme ascetic, and numerous miracles were ascribed to him...
.

Most Egyptian monks of that time were illiterate. Evagrius, a highly-educated classical scholar, is believed to be one of the first people to begin recording and systematizing the erstwhile oral teachings of the monastic authorities known as the Desert Fathers
Desert Fathers
The Desert Fathers were hermits, ascetics, monks, and nuns who lived mainly in the Scetes desert of Egypt beginning around the third century AD. The most well known was Anthony the Great, who moved to the desert in 270–271 and became known as both the father and founder of desert monasticism...
. Eventually, he also became regarded as a Desert Father, and several of his apothegms appear in the 'Vitae Patrum' (a collection of sayings from early Christian monks).

Evagrius rigorously tried to avoid teaching beyond the spiritual maturity of his audiences. When addressing novices, he carefully stuck to concrete, practical issues (which he called praktike). For example, in Peri Logismon 16, he includes this disclaimer:

I cannot write about all the villainies of the demons; and I feel ashamed to speak about them at length and in detail, for fear of harming the more simple-minded among my readers.

The most prominent feature of his research was a system of categorizing various forms of temptation. He developed a comprehensive list in 375 AD of eight evil thoughts (λογισμοι), or eight terrible temptations, from which all sinful behavior springs. This list was intended to serve a diagnostic purpose: to help readers identify the process of temptation, their own strengths and weaknesses, and the remedies available for overcoming temptation.

Evagrius taught that tears were the utmost sign of true repentance and that weeping, even for days at a time, opened one up to God.

Like the other Cappadocian fathers Gregory of Nazianzus and Basil of Caesarea, Evagrius was an avid student of Origen of Alexandria (c. 185-250 AD), and he further developed certain esoteric speculations regarding the pre-existence of human souls, the final state of believers, and certain teachings about the natures of God and Christ. These speculative teachings were declared heretical by the Second Council of Constantinople
Second Council of Constantinople
The Second Council of Constantinople is recognized as the Fifth Ecumenical Council by the Eastern Orthodox, Roman Catholics, Old Catholics, and a number of other Western Christian groups. It was held from May 5 to June 2, 553, having been called by the Byzantine Emperor Justinian...
in 553 AD. When subsequent ecumenical councils sought to clarify these anathemas, Origen (along with Evagrius and a few others) were condemned as well.

Despite the accusations of heresy, Evagrius exerted a tremendous influence on the church through his practical writings. Though most of his writings were destroyed, many survived simply because they were so helpful. Some of his books were attributed to other writers, such as Basil, Gregory Nazianzus, and Saint Nilus
Saint Nilus
Saint Nilus may refer to:*Nilus of Sinai *Saint Nilus the Younger *Nil Sorsky *St. Nilus of Stolbnyi Island...
. One of his key disciples, John Cassian, established a few monasteries in southern France and effectively adapted key Evagrian works for his Western audiences.

Other significant figures influenced by Evagrius include: John Climacus
John Climacus
Saint John Climacus , also known as John of the Ladder, John Scholasticus and John Sinaites, was a 7th century Christian monk at the monastery on Mount Sinai. He is revered as a saint by the Roman Catholic, Oriental Orthodox, Eastern Orthodox and Eastern Catholic churches.We have almost no...
, Maximus the Confessor
Maximus the Confessor
Maximus the Confessor was a Christian monk, theologian, and scholar. In his early life, he was a civil servant, and an aide to the Byzantine Emperor Heraclius...
, Benedict
Benedict of Nursia
Saint Benedict of Nursia is a Christian saint, honored by the Roman Catholic Church as the patron saint of Europe and students.Benedict founded twelve communities for monks at Subiaco, about to the east of Rome, before moving to Monte Cassino in the mountains of southern Italy. There is no...
(the founder of the Order of St. Benedict), and Symeon the New Theologian
Symeon the New Theologian
Symeon the New Theologian was a Byzantine Christian monk and poet who was the last of three saints canonized by the Eastern Orthodox church and given the title of "Theologian"...
.