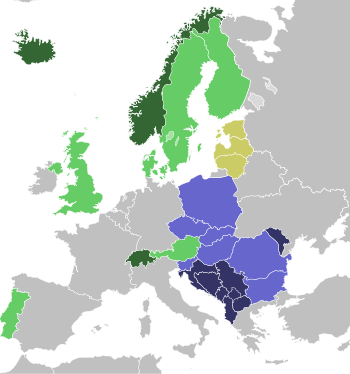 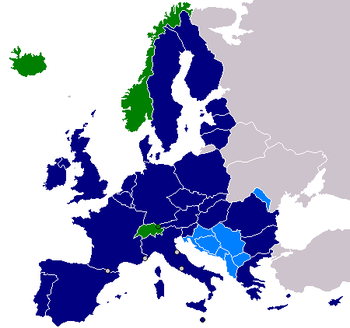 At present, there are three multi-lateral free trade area
Free trade area
A free trade area is a trade bloc whose member countries have signed a free trade agreement , which eliminates tariffs, import quotas, and preferences on most goods and services traded between them. If people are also free to move between the countries, in addition to FTA, it would also be...
s (FTAs) in Europe
Europe
Europe is, by convention, one of the world's seven continents. Comprising the westernmost peninsula of Eurasia, Europe is generally 'divided' from Asia to its east by the watershed divides of the Ural and Caucasus Mountains, the Ural River, the Caspian and Black Seas, and the waterways connecting...
, plus the European Union
European Union
The European Union is an economic and political union of 27 independent member states which are located primarily in Europe. The EU traces its origins from the European Coal and Steel Community and the European Economic Community , formed by six countries in 1958...
(EU) which has a single market, and one former-FTA in recent history. Note there are a number of other bilateral free trade agreements.

The European Free Trade Association
European Free Trade Association
The European Free Trade Association or EFTA is a free trade organisation between four European countries that operates parallel to, and is linked to, the European Union . EFTA was established on 3 May 1960 as a trade bloc-alternative for European states who were either unable to, or chose not to,...
(EFTA) was created in 1960 by the outer seven (as a looser alternative to the then-European Communities
European Communities
The European Communities were three international organisations that were governed by the same set of institutions...
) but most of its membership has since joined the Communities/EU leaving only four countries (Iceland
Iceland
Iceland , described as the Republic of Iceland, is a Nordic and European island country in the North Atlantic Ocean, on the Mid-Atlantic Ridge. Iceland also refers to the main island of the country, which contains almost all the population and almost all the land area. The country has a population...
, Norway
Norway
Norway , officially the Kingdom of Norway, is a Nordic unitary constitutional monarchy whose territory comprises the western portion of the Scandinavian Peninsula, Jan Mayen, and the Arctic archipelago of Svalbard and Bouvet Island. Norway has a total area of and a population of about 4.9 million...
, Switzerland
Switzerland
Switzerland name of one of the Swiss cantons. ; ; ; or ), in its full name the Swiss Confederation , is a federal republic consisting of 26 cantons, with Bern as the seat of the federal authorities. The country is situated in Western Europe,Or Central Europe depending on the definition....
and Liechtenstein
Liechtenstein
The Principality of Liechtenstein is a doubly landlocked alpine country in Central Europe, bordered by Switzerland to the west and south and by Austria to the east. Its area is just over , and it has an estimated population of 35,000. Its capital is Vaduz. The biggest town is Schaan...
) still party to it.

Following the fall of the Iron Curtain
Iron Curtain
The concept of the Iron Curtain symbolized the ideological fighting and physical boundary dividing Europe into two separate areas from the end of World War II in 1945 until the end of the Cold War in 1989...
, two FTAs were created in Eastern Europe
Eastern Europe
Eastern Europe is the eastern part of Europe. The term has widely disparate geopolitical, geographical, cultural and socioeconomic readings, which makes it highly context-dependent and even volatile, and there are "almost as many definitions of Eastern Europe as there are scholars of the region"...
, the Baltic Free Trade Area (BAFTA) and the Central European Free Trade Agreement
Central European Free Trade Agreement
The Central European Free Trade Agreement is a trade agreement between non-EU countries in Southeast Europe.-Members:As of 1 May 2007, the parties of the CEFTA agreement are: Albania, Bosnia and Herzegovina, Croatia, Macedonia, Moldova, Montenegro, Serbia and UNMIK on behalf of Kosovo.Former...
(CEFTA), in order to stabilise these countries for membership of the EU. With the 2004 EU enlargement
Treaty of Accession 2003
The Treaty of Accession 2003 was the agreement between the European Union and ten countries , concerning these countries' accession into the EU...
, the original members of both of these have left these agreements and joined the EU.

CEFTA has expanded into southern Europe with members from the Western Balkans and Moldova
Moldova
Moldova , officially the Republic of Moldova is a landlocked state in Eastern Europe, located between Romania to the West and Ukraine to the North, East and South. It declared itself an independent state with the same boundaries as the preceding Moldavian Soviet Socialist Republic in 1991, as part...
. All of the new CEFTA countries, except for Moldova, are prospective members of the EU and hence EFTA is the only FTA with a long term future, as there are no immediate plans for these countries to change their present status. However, CEFTA may gain new members in the form of countries to the east of the present EU.

BAFTA was created to help prepare the countries for their accession to the EU
Enlargement of the European Union
The Enlargement of the European Union is the process of expanding the European Union through the accession of new member states. This process began with the Inner Six, who founded the European Coal and Steel Community in 1952...
. Hence, BAFTA was created more as an initiative of the EU than out of a desire Baltic states
Baltic states
The term Baltic states refers to the Baltic territories which gained independence from the Russian Empire in the wake of World War I: primarily the contiguous trio of Estonia, Latvia, Lithuania ; Finland also fell within the scope of the term after initially gaining independence in the 1920s.The...
to trade between themselves: they were more interested in gaining access to the western European market
Market
A market is one of many varieties of systems, institutions, procedures, social relations and infrastructures whereby parties engage in exchange. While parties may exchange goods and services by barter, most markets rely on sellers offering their goods or services in exchange for money from buyers...
s.

BAFTA's agreement was signed by the three states on 13 September 1993 and came into force on 1 April 1994. On 1 January 1997 the agreement was extended to cover trade in agricultural produce
Produce
Produce is a generalized term for a group of farm-produced goods and, not limited to fruits and vegetables . More specifically, the term "produce" often implies that the products are fresh and generally in the same state as where they were harvested. In supermarkets the term is also used to refer...
. On 1 May 2004, all three states joined the European Union, and BAFTA ceased to exist.

BAFTA was part of general co-operation between the three countries, modelled on Nordic
Nordic countries
The Nordic countries make up a region in Northern Europe and the North Atlantic which consists of Denmark, Finland, Iceland, Norway and Sweden and their associated territories, the Faroe Islands, Greenland and Åland...
co-operation (see Nordic Council
Nordic Council
The Nordic Council is a geo-political, inter-parliamentary forum for co-operation between the Nordic countries. It was established following World War II and its first concrete result was the introduction in 1952 of a common labour market and free movement across borders without passports for the...
). Leaders met regularly and, as well as a free trade area, they formed a common visa area and started military co-operation due to the proximity of Russia
Russia
Russia or , officially known as both Russia and the Russian Federation , is a country in northern Eurasia. It is a federal semi-presidential republic, comprising 83 federal subjects...
.

The European Union Customs Union is a customs union
Customs union
A customs union is a type of trade bloc which is composed of a free trade area with a common external tariff. The participant countries set up common external trade policy, but in some cases they use different import quotas...
which consists of all the Member States of the European Union (EU), Turkey and three European ministates: San Marino, Monaco and Andorra. No customs
Customs
Customs is an authority or agency in a country responsible for collecting and safeguarding customs duties and for controlling the flow of goods including animals, transports, personal effects and hazardous items in and out of a country...
are levied on goods travelling within the customs union and members of the customs union impose a common external tariff
Common external tariff
When a group of countries form a customs union they must introduce a common external tariff. The same customs duties, import quotas, preferences or other non-tariff barriers to trade apply to all goods entering the area, regardless of which country within the area they are entering...
on all goods entering the union. One of the consequences of the customs union is that the European Union
European Union
The European Union is an economic and political union of 27 independent member states which are located primarily in Europe. The EU traces its origins from the European Coal and Steel Community and the European Economic Community , formed by six countries in 1958...
has to negotiate as a single entity in international trade deals such as the World Trade Organisation
World Trade Organization
The World Trade Organization is an organization that intends to supervise and liberalize international trade. The organization officially commenced on January 1, 1995 under the Marrakech Agreement, replacing the General Agreement on Tariffs and Trade , which commenced in 1948...
.