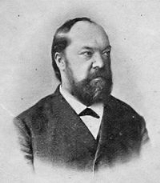 Encyclopedia
Eugen Richter was a German politician
Politician
A politician, political leader, or political figure is an individual who is involved in influencing public policy and decision making...
and journalist
Journalist
A journalist collects and distributes news and other information. A journalist's work is referred to as journalism.A reporter is a type of journalist who researchs, writes, and reports on information to be presented in mass media, including print media , electronic media , and digital media A...
.

Born as the son of a combat medic, Richter attended the Gymnasium
Gymnasium (school)
A gymnasium is a type of school providing secondary education in some parts of Europe, comparable to English grammar schools or sixth form colleges and U.S. college preparatory high schools. The word γυμνάσιον was used in Ancient Greece, meaning a locality for both physical and intellectual...
in his home town of Düsseldorf. Since 1856, he studied Law and Economics at the Universities of Bonn
University of Bonn
The University of Bonn is a public research university located in Bonn, Germany. Founded in its present form in 1818, as the linear successor of earlier academic institutions, the University of Bonn is today one of the leading universities in Germany. The University of Bonn offers a large number...
, Berlin
Humboldt University of Berlin
The Humboldt University of Berlin is Berlin's oldest university, founded in 1810 as the University of Berlin by the liberal Prussian educational reformer and linguist Wilhelm von Humboldt, whose university model has strongly influenced other European and Western universities...
and Heidelberg, that he finished with a law degree in 1859. In those years Richter became a strong advocate of free trade, market economy and Rechtsstaat
Rechtsstaat
Rechtsstaat is a concept in continental European legal thinking, originally borrowed from German jurisprudence, which can be translated as "legal state", "state of law", "state of justice", or "state of rights"...
, views he held for all his life.
In 1859, Richter became a civil servant in judiciary. His liberal
Liberalism
Liberalism is the belief in the importance of liberty and equal rights. Liberals espouse a wide array of views depending on their understanding of these principles, but generally, liberals support ideas such as constitutionalism, liberal democracy, free and fair elections, human rights,...
views caused some trouble with the Prussia
Prussia
Prussia was a German kingdom and historic state originating out of the Duchy of Prussia and the Margraviate of Brandenburg. For centuries, the House of Hohenzollern ruled Prussia, successfully expanding its size by way of an unusually well-organized and effective army. Prussia shaped the history...
n bureaucracy several times.
Richter achieved renown for his essay Über die Freiheit des Schankgewerbes (On the liberty of the tavern trade). The Magdeburger Spukgeschichte of 1862 brought in a disciplinary procedure. However it was printed in the Niederrheinischen Volkszeitung and in the Magdeburger Zeitung.

In 1864 he was elected the mayor of Neuwied, but the election result was not confirmed by the president of the provincial government.
After that, Richter left the civil service and fully entered into parliament and journalism.
He became a parliamentary correspondent of the Elberfelder Zeitung to Berlin and established thus also political contacts. In 1867 Richter entered the Reichstag as a member of the Left liberals, and since 1869 he was also a member of the Prussian Lower House. In response to the Anti-Socialist Laws
Anti-Socialist Laws
The Anti-Socialist Laws or Socialist Laws were a series of acts, the first of which was passed on October 19, 1878 by the German Reichstag lasting till March 31, 1881, and extended 4 times...
passed in 1878 banning the Social Democrat Party
Social Democratic Party of Germany
The Social Democratic Party of Germany is a social-democratic political party in Germany...
Richter said: "I fear Social-Democracy more under this law than without it". Due to fears that Bismarck was going to introduce a tobacco monopoly Richter unsuccessfully sought to persuade the Reichstag to pass a resolution condemning such a monopoly as "economically, financially, and politically unjustifiable". When Bismarck proposed a system of social insurance paid by the state Richter denounced them as "not Socialistic, but Communistic".

He was the most influential leader of the German Progress Party
German Progress Party
The German Progress Party was the first modern political party with a program in Germany, founded by the liberal members of the Prussian Lower House in 6 June, 1861....
(Deutsche Fortschrittspartei), since 1884 of the German Freeminded Party
German Freeminded Party
The German Free-minded Party was a German liberal party, founded as a result of the merger of the German Progress Party and Liberal Union in 5 March, 1884....
(Deutsche Freisinnige Partei), and since 1893 of the Freeminded People's Party
Freeminded People's Party (Germany)
The Free-minded People's Party was a left liberal party in the German Empire, founded as a result of the split of the German Free-minded Party in 1893. One of its most notable members was Eugen Richter, who was party leader from 1893 to 1906...
(Freisinnige Volkspartei). Beside that he was one of the greatest critics of the policy of Otto von Bismarck
Otto von Bismarck
Otto Eduard Leopold, Prince of Bismarck, Duke of Lauenburg , simply known as Otto von Bismarck, was a Prussian-German statesman whose actions unified Germany, made it a major player in world affairs, and created a balance of power that kept Europe at peace after 1871.As Minister President of...
as well as the National Liberal Party
National Liberal Party (Germany)
The National Liberal Party was a German political party which flourished between 1867 and 1918. It was formed by Prussian liberals who put aside their differences with Bismarck over domestic policy due to their support for his highly successful foreign policy, which resulted in the unification of...
and the Social Democrats. From 1885 to 1904 he was the chief editor of the liberal newspaper Freisinnige Zeitung.