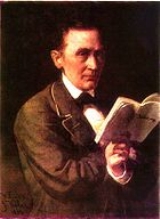 Encyclopedia
The Estonian Age of Awakening is a period in history where Estonians came to acknowledge themselves as a nation
Nation
A nation may refer to a community of people who share a common language, culture, ethnicity, descent, and/or history. In this definition, a nation has no physical borders. However, it can also refer to people who share a common territory and government irrespective of their ethnic make-up...
deserving the right to govern themselves
Self-determination
Self-determination is the principle in international law that nations have the right to freely choose their sovereignty and international political status with no external compulsion or external interference...
. This period is considered to begin in 1850s with greater rights being granted to commoners and to end with the declaration of the Republic of Estonia in 1918. The term is sometimes also applied to the period around 1987–1988.

Although Estonian national consciousness spread in the course of the 19th century, some degree of ethnic awareness in the literate middle class preceded this development. By the 18th century the self-denomination eestlane along with the older maarahvas spread among Estonians in the then provinces of Estonia
Governorate of Estonia
The Governorate of Estonia or Estland, also known as the Government of Estonia or Province of Estonia, was a governorate of the Russian Empire in what is now northern Estonia.-Historical overview:...
and Livonia of the Russian Empire
Russian Empire
The Russian Empire was a state that existed from 1721 until the Russian Revolution of 1917. It was the successor to the Tsardom of Russia and the predecessor of the Soviet Union...
. The Bible was translated in 1739, and the number of books and brochures published in Estonian increased from 18 in the 1750s to 54 in the 1790s. By the end of the century more than half of adult peasants were able to read. The first university-educated intellectuals identifying themselves as Estonians, including Friedrich Robert Faehlmann
Friedrich Robert Faehlmann
Friedrich Robert Faehlmann was an Estonian philologist and an Estophile active in Livonia, Russian Empire...
(1798–1850), Kristjan Jaak Peterson
Kristjan Jaak Peterson
Kristjan Jaak Peterson also known as Christian Jacob Petersohn, was an Estonian poet, commonly regarded as a herald of Estonian national literature and the founder of modern Estonian poetry. His literary career was cut short by the tuberculosis that killed him at the age of 21. His birthday on...
(1801–1822) and Friedrich Reinhold Kreutzwald
Friedrich Reinhold Kreutzwald
Friedrich Reinhold Kreutzwald was an Estonian writer, who is considered to be the father of the national literature for the country.-Life:Friedrich's parents were serfs at the Jõepere estate, Virumaa. His father worked as a granary keeper and his mother was a chambermaid...
(1803–1882), came to prominence in the 1820s. The ruling elite had remained predominantly German in language and culture since the conquest of the early 13th century. Garlieb Merkel
Garlieb Merkel
Garlieb Helwig Merkel was a Baltic German writer and activist and an early Estophile and Lettophile....
(1769–1850), a Baltic German Estophile, was the first author to treat the Estonians as a nationality equal to others; he became a source of inspiration for the Estonian national movement, modelled on Baltic German cultural world before the middle of the 19th century. However, in the middle of the century the Estonians, with such leaders as Carl Robert Jakobson
Carl Robert Jakobson
Carl Robert Jakobson was an Estonian writer, politician and teacher active in Livonia, Russian Empire. He was one of the most important persons of Estonian national awakening in the second half of the 19th century.Between 1860 and 1880, the Governorate of Livonia was led by a moderate...
(1841–1882), Jakob Hurt
Jakob Hurt
Jakob Hurt was a notable Estonian folklorist, theologist, and linguist. With respect to the latter, he is perhaps best known for his dissertation on "pure" -ne stem nouns...
(1839–1907) and Johann Voldemar Jannsen
Johann Voldemar Jannsen
Johann Voldemar Jannsen was an Estonian journalist and poet active in Livonia....
(1819–1890), became more ambitious in their political demands and started leaning towards the Finns as a successful model of national movement
Fennoman
The Fennomans were the most important political movement in the 19th century Grand Principality of Finland. They succeeded the fennophile interests of the 18th and early 19th century.-History:...
and, to some extent, the neighbouring Young Latvian national movement
Young Latvians
Young Latvians is the term most often applied to the intellectuals of the first Latvian National Awakening , active from the 1850s to the 1880s. "Jaunlatvieši" is also sometimes translated as "New Latvians," but "Young Latvians" is the more accurate term because it was modeled on the Young Germany...
. Significant accomplishments were the publication of the national epic, Kalevipoeg
Kalevipoeg
Kalevipoeg is an epic poem by Friedrich Reinhold Kreutzwald held to be the Estonian national epic.- Origins : There existed an oral tradition within Ancient Estonia of legends explaining the origin of the world...
, in 1862, and the organization of the first national song festival in 1869. By the end of the 1860s the Estonians became unwilling to remain reconciled with German cultural and political hegemony. Before the attempts at Russification
Russification
Russification is an adoption of the Russian language or some other Russian attributes by non-Russian communities...
in the 1880s–1890s their view of Imperial Russia remained positive.

In 1881 seventeen Estonian societies, in a memorandum inspired by Carl Robert Jakobson, called upon Emperor Alexander III of Russia
Alexander III of Russia
Alexander Alexandrovich Romanov , historically remembered as Alexander III or Alexander the Peacemaker reigned as Emperor of Russia from until his death on .-Disposition:...
for the introduction of zemstvo
Zemstvo
Zemstvo was a form of local government that was instituted during the great liberal reforms performed in Imperial Russia by Alexander II of Russia. The idea of the zemstvo was elaborated by Nikolay Milyutin, and the first zemstvo laws were put into effect in 1864...
institutions (which had already existed in most parts of the Empire), with equal representation for Estonians and Baltic Germans and administrative unification of the ethnic Estonian areas. Postimees
Postimees
Postimees is an Estonian daily newspaper. It was established in 1 January 1857 by Johann Voldemar Jannsen and became Estonia's first daily newspaper in 1891....
, the first Estonian daily, began appearing in 1891. According to the 1897 census, the Estonians had the second highest literacy rate in the Russian Empire
Russian Empire
The Russian Empire was a state that existed from 1721 until the Russian Revolution of 1917. It was the successor to the Tsardom of Russia and the predecessor of the Soviet Union...
after the Finns in the Grand Duchy of Finland
Grand Duchy of Finland
The Grand Duchy of Finland was the predecessor state of modern Finland. It existed 1809–1917 as part of the Russian Empire and was ruled by the Russian czar as Grand Prince.- History :...
(96.1% of the Estonian-speaking population of the Baltic Provinces
Baltic provinces
The Baltic governorates , originally the Ostsee governorates is a collective name for the administrative units of the Russian Empire set up at the territories of Swedish Estonia, Swedish Livonia and, afterwards, of Duchy of Courland and Semigallia .-History:The Treaty of Vilnius of 1561 included...
10 years and older, roughly equally for males and females). The cities became Estonicized quickly, and in 1897 ethnic Estonians comprised two-thirds of the total Estonian urban population.

In response to a period of Russification
Russification
Russification is an adoption of the Russian language or some other Russian attributes by non-Russian communities...
initiated by the Russian empire in the 1880s, Estonian nationalism took on even more political tones, with intellectuals calling for greater autonomy. As the Russian Revolution of 1905
Russian Revolution of 1905
The 1905 Russian Revolution was a wave of mass political and social unrest that spread through vast areas of the Russian Empire. Some of it was directed against the government, while some was undirected. It included worker strikes, peasant unrest, and military mutinies...
swept through Estonia, the Estonians called for freedom of the press
Freedom of the press
Freedom of the press or freedom of the media is the freedom of communication and expression through vehicles including various electronic media and published materials...
and assembly
Freedom of assembly
Freedom of assembly, sometimes used interchangeably with the freedom of association, is the individual right to come together and collectively express, promote, pursue and defend common interests...
, for universal franchise
Suffrage
Suffrage, political franchise, or simply the franchise, distinct from mere voting rights, is the civil right to vote gained through the democratic process...
, and for national autonomy. Estonian gains were minimal, but the tense stability that prevailed between 1905 and 1917 allowed Estonians to advance the aspiration of national statehood. Following the February Revolution
February Revolution
The February Revolution of 1917 was the first of two revolutions in Russia in 1917. Centered around the then capital Petrograd in March . Its immediate result was the abdication of Tsar Nicholas II, the end of the Romanov dynasty, and the end of the Russian Empire...
of 1917 Estonian lands were for the first time united in one administrative unit, the Autonomous Governorate of Estonia
Autonomous Governorate of Estonia
The local autonomy in Estonia was established as a result of the Russian Revolution of 1917. For the duration of control by Imperial Russia, Estonia was divided between two governorates . The Governorate of Estonia in the north corresponded roughly to the area of Danish Estonia and the northern...
. After the Bolshevik
Bolshevik
The Bolsheviks, originally also Bolshevists , derived from bol'shinstvo, "majority") were a faction of the Marxist Russian Social Democratic Labour Party which split apart from the Menshevik faction at the Second Party Congress in 1903....
takeover of power in Russia in the October Revolution
October Revolution
The October Revolution , also known as the Great October Socialist Revolution , Red October, the October Uprising or the Bolshevik Revolution, was a political revolution and a part of the Russian Revolution of 1917...
of 1917 and the German
German Empire
The German Empire refers to Germany during the "Second Reich" period from the unification of Germany and proclamation of Wilhelm I as German Emperor on 18 January 1871, to 1918, when it became a federal republic after defeat in World War I and the abdication of the Emperor, Wilhelm II.The German...
victories against the Russian army, Estonia declared itself an independent republic on 24 February 1918.