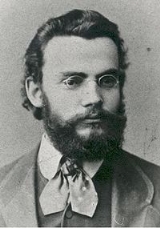 Carl Robert Jakobson was an Estonian writer
Estonian literature
Estonian literature refers to literature written in the Estonian language The domination of Estonia after the Northern Crusades, from the 13th century to 1918 by Germany, Sweden, and Russia resulted few early written literary works in Estonian language. The oldest records of written Estonian...
, politician and teacher active in Livonia, Russian Empire
Russian Empire
The Russian Empire was a state that existed from 1721 until the Russian Revolution of 1917. It was the successor to the Tsardom of Russia and the predecessor of the Soviet Union...
. He was one of the most important persons of Estonian national awakening
Estonian national awakening
The Estonian Age of Awakening is a period in history where Estonians came to acknowledge themselves as a nation deserving the right to govern themselves. This period is considered to begin in 1850s with greater rights being granted to commoners and to end with the declaration of the Republic of...
in the second half of the 19th century.

Between 1860 and 1880, the Governorate of Livonia was led by a moderate nobility-dominated government. Jakobson became the leader of the radical wing, advocating widespread reforms in Livonia. He was responsible for the economic-political program of the Estonian national movement. Jakobson urged Estonians
Estonians
Estonians are a Finnic people closely related to the Finns and inhabiting, primarily, the country of Estonia. They speak a Finnic language known as Estonian...
to demand equal political rights with the region's Germans and an end to privileged position of the Baltic-German nobility
Baltic Noble Corporations
Baltic Noble Corporations of Courland, Livonia, Estonia, and Oesel were medieval fiefdoms formed by German nobles in the 13th century under vassalage to the Teutonic Knights and Denmark in modern Latvia and Estonia...
.