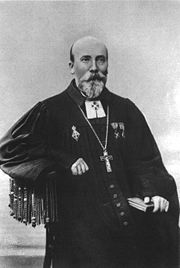 Jakob Hurt was a notable Estonian folklorist
Estonian folklore
The earliest mentioning of Estonian singing dates back to Saxo Grammaticus Gesta Danorum . Saxo speaks of Estonian warriors who sang at night while waiting for a battle. Henry of Livonia in the beginning of the 13th. century describes Estonian sacrificial customs, gods and spirits. In 1578...
, theologist, and linguist
Linguistics
Linguistics is the scientific study of human language. Linguistics can be broadly broken into three categories or subfields of study: language form, language meaning, and language in context....
. With respect to the latter, he is perhaps best known for his dissertation on "pure" -ne stem nouns ("Die estnischen Nomina auf -ne purum", 1886). He is also featured on the 10 krooni
10 Krooni
The Estonian 10 Krooni bill is a denomination of the Estonian currency. Jakob Hurt , who was an Estonian folklorist, theologian, linguist and prominent social figure during the Estonian national awakening in the 19th–20th century, is featured with an engraved portrait on the front side of the bill...
note.

Also known as the "king of Estonian folklore", Hurt planned the publication in the 1870s of a six volume series called Monumenta Estoniae Antiquae
Monumenta Estoniae Antiquae
The Monumenta Estoniae Antiquae is a corpus of Estonian folksongs which contains around 800,000 pages of manuscript, including 100,000 songs in the standard trochaic dimeter form. This corpus is one of the largest and most significant of its kind in the world....
. Hurt organised around 1400 volunteer collectors via a press campaign, who visited almost every house in Livonia collecting around 124,000 pages of folklore. However due to financial difficulties, only two volumes of folk songs were published in 1875-76, titled Vana kannel (Old Harp). Two more volumes were subsequently published quite some time later in 1938 and 1941. Hurt also published a three volume collection Setukeste laulud (The Setus
Setos
Setos are an autochthonous ethnic and linguistic minority in south-eastern Estonia and north-western Russia. Setos are mostly Seto-speaking Orthodox Christians of Estonian nationality. Their dialect, that some consider an independent language - the Seto language belongs to the Finnic group of the...
' Songs) between 1894 and 1907.