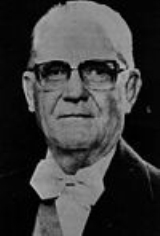 Encyclopedia
Ernesto Beckmann Geisel, (eɾˈnɛstu ˈbɛkmɐ̃ ˈɡajzew; 3 August 1907 – 12 September 1996) was a Brazil
Brazil
Brazil , officially the Federative Republic of Brazil , is the largest country in South America. It is the world's fifth largest country, both by geographical area and by population with over 192 million people...
ian military leader and politician
Politician
A politician, political leader, or political figure is an individual who is involved in influencing public policy and decision making...
of German
Germans
The Germans are a Germanic ethnic group native to Central Europe. The English term Germans has referred to the German-speaking population of the Holy Roman Empire since the Late Middle Ages....
descent who was President of Brazil from 1974 to 1979.

Geisel along with his brother, Orlando (1905–1979, who would be later Minister of Army in the Médici's government), entered the army early and was the first of his class when he graduated from the Military College of Porto Alegre
Porto Alegre
Porto Alegre is the tenth most populous municipality in Brazil, with 1,409,939 inhabitants, and the centre of Brazil's fourth largest metropolitan area . It is also the capital city of the southernmost Brazilian state of Rio Grande do Sul. The city is the southernmost capital city of a Brazilian...
in 1925. He acquired a better military knowledge as he attended the Escola Militar do Realengo, graduated, in 1928, as first in his class and could take part in the artillery as an Aspirante. Geisel witnessed and participated in the most prominent events of Brazilian history
History of Brazil
The history of Brazil begins with the arrival of the first indigenous peoples, thousands of years ago by crossing the Bering land bridge into Alaska and then moving south....
in the 20th century, such as the revolution of 1930, the Getúlio Vargas
Getúlio Vargas
Getúlio Dornelles Vargas served as President of Brazil, first as dictator, from 1930 to 1945, and in a democratically elected term from 1951 until his suicide in 1954. Vargas led Brazil for 18 years, the most for any President, and second in Brazilian history to Emperor Pedro II...
dictatorship and the 1964 military coup d'état that overthrew the leftist President João Goulart
João Goulart
João Belchior Marques Goulart was a Brazilian politician and the 24th President of Brazil until a military coup d'état deposed him on April 1, 1964. He is considered to have been the last left-wing President of the country until Luiz Inácio Lula da Silva took office in 2003.-Name:João Goulart is...
. In this military intervention, Geisel was an important figure and he became Military chief of Staff of President Humberto de Alencar Castelo Branco
Humberto de Alencar Castelo Branco
Marshal Humberto de Alencar Castelo Branco was a Brazilian military leader and politician.He was President of Brazil, as a military dictator, after the 1964 coup d'etat...
.

Also in 1964 he became Lieutenant-General and in 1966 a 4 star-General. In 1969 he was made president of Petrobras
Petrobras
Petróleo Brasileiro or Petrobras is a semi-public Brazilian multinational energy corporation headquartered in Rio de Janeiro, Brazil. It is the largest company in Latin America by market capitalization and revenue, and the largest company headquartered in the Southern Hemisphere by market...
, the state-owned oil
Petroleum
Petroleum or crude oil is a naturally occurring, flammable liquid consisting of a complex mixture of hydrocarbons of various molecular weights and other liquid organic compounds, that are found in geologic formations beneath the Earth's surface. Petroleum is recovered mostly through oil drilling...
company of Brazil.

Geisel married Lucy Markus, the daughter of an army colonel, in 1940. They had a daughter, Amália Lucy (later a university professor), and a son, Orlando, from whose death in a 1957 train accident his father never completely recovered. His widow died in an automobile accident in 2000.

In 1973 Geisel was appointed by President Emílio Garrastazu Médici
Emílio Garrastazu Médici
Emílio Garrastazu Médici, was a Brazilian military leader and politician. His rightist rule from 1969 to 1974, marked the apex of military governments in Brazil.-Early life:...
and other military leaders to be the candidate of the National Renewal Alliance Party
National Renewal Alliance Party
The National Renewal Alliance Party or Aliança Renovadora Nacional was a conservative political party that existed in Brazil between 1966 and 1985...
(ARENA) for the presidency. At that time, the president of Brazil was chosen by the military and then approved by the Congress in order to give an impression of free elections. Geisel was elected by a vast majority and was inaugurated on March 15, 1974 for a five-year mandate.

From 1968 to 1973, the Brazilian economy grew at a rate of more than 10% per year, the fastest in the world. But due to the oil shock crisis in 1974, development fell to 5–6% per year. Because oil had to be imported, Brazil's foreign debt
External debt
External debt is that part of the total debt in a country that is owed to creditors outside the country. The debtors can be the government, corporations or private households. The debt includes money owed to private commercial banks, other governments, or international financial institutions such...
began to rise.

In the early 1970s, the radical leftists were torture
Torture
Torture is the act of inflicting severe pain as a means of punishment, revenge, forcing information or a confession, or simply as an act of cruelty. Throughout history, torture has often been used as a method of political re-education, interrogation, punishment, and coercion...
d or even murdered, while the press was censored. By 1974 signals of guerrilla activities
Guerrilla warfare
Guerrilla warfare is a form of irregular warfare and refers to conflicts in which a small group of combatants including, but not limited to, armed civilians use military tactics, such as ambushes, sabotage, raids, the element of surprise, and extraordinary mobility to harass a larger and...
were silenced.

The military regime's main censorship
Censorship
thumb|[[Book burning]] following the [[1973 Chilean coup d'état|1973 coup]] that installed the [[Military government of Chile |Pinochet regime]] in Chile...
tool, the Fifth Institutional Act, which had given the government dictatorial powers, was renounced by President Geisel in the end of 1978.

In his 5 years of government, Geisel adopted a more pragmatic
Pragmatism
Pragmatism is a philosophical tradition centered on the linking of practice and theory. It describes a process where theory is extracted from practice, and applied back to practice to form what is called intelligent practice...
foreign policy
Foreign policy
A country's foreign policy, also called the foreign relations policy, consists of self-interest strategies chosen by the state to safeguard its national interests and to achieve its goals within international relations milieu. The approaches are strategically employed to interact with other countries...
. Despite being a conservative and deeply anti-communist, Geisel made significant overtures towards the communist bloc.

During Geisel's term of office, Brazil established diplomatic relations with the People's Republic of China
People's Republic of China
China , officially the People's Republic of China , is the most populous country in the world, with over 1.3 billion citizens. Located in East Asia, the country covers approximately 9.6 million square kilometres...
and Angola
Angola
Angola, officially the Republic of Angola , is a country in south-central Africa bordered by Namibia on the south, the Democratic Republic of the Congo on the north, and Zambia on the east; its west coast is on the Atlantic Ocean with Luanda as its capital city...
, signaling a growing distance between Brasilia
Brasília
Brasília is the capital city of Brazil. The name is commonly spelled Brasilia in English. The city and its District are located in the Central-West region of the country, along a plateau known as Planalto Central. It has a population of about 2,557,000 as of the 2008 IBGE estimate, making it the...
and Washington
Washington, D.C.
Washington, D.C., formally the District of Columbia and commonly referred to as Washington, "the District", or simply D.C., is the capital of the United States. On July 16, 1790, the United States Congress approved the creation of a permanent national capital as permitted by the U.S. Constitution....
. Although both countries remained allies, Geisel was keen to seek alliances and, more importantly, economic opportunities in other parts of the Globe, especially Africa and Asia.