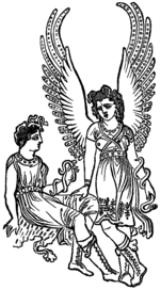 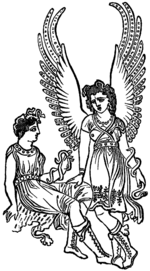 In Greek mythology
Greek mythology
Greek mythology is the body of myths and legends belonging to the ancient Greeks, concerning their gods and heroes, the nature of the world, and the origins and significance of their own cult and ritual practices. They were a part of religion in ancient Greece...
the Erinyes (Ἐρινύες, pl. of Ἐρινύς, Erinys; literally "the avengers") from Greek ἐρίνειν " pursue, persecute"--sometimes referred to as "infernal goddesses" (Greek χθόνιαι θεαί)-- were female chthonic
Chthonic
Chthonic designates, or pertains to, deities or spirits of the underworld, especially in relation to Greek religion. The Greek word khthon is one of several for "earth"; it typically refers to the interior of the soil, rather than the living surface of the land or the land as territory...
deities
Deity
A deity is a recognized preternatural or supernatural immortal being, who may be thought of as holy, divine, or sacred, held in high regard, and respected by believers....
of vengeance
Revenge
Revenge is a harmful action against a person or group in response to a grievance, be it real or perceived. It is also called payback, retribution, retaliation or vengeance; it may be characterized, justly or unjustly, as a form of justice.-Function in society:Some societies believe that the...
. A formulaic oath in the Iliad
Iliad
The Iliad is an epic poem in dactylic hexameters, traditionally attributed to Homer. Set during the Trojan War, the ten-year siege of the city of Troy by a coalition of Greek states, it tells of the battles and events during the weeks of a quarrel between King Agamemnon and the warrior Achilles...
invokes them as "those who beneath the earth punish whosoever has sworn a false oath". Burkert
Walter Burkert
Walter Burkert is a German scholar of Greek mythology and cult.An emeritus professor of classics at the University of Zurich, Switzerland, he also has taught in the United Kingdom and the United States...
suggests they are "an embodiment of the act of self-cursing contained in the oath".

When the Titan Cronus
Cronus
In Greek mythology, Cronus or Kronos was the leader and the youngest of the first generation of Titans, divine descendants of Gaia, the earth, and Uranus, the sky...
castrated his father Uranus
Uranus (mythology)
Uranus , was the primal Greek god personifying the sky. His equivalent in Roman mythology was Caelus. In Ancient Greek literature, according to Hesiod in his Theogony, Uranus or Father Sky was the son and husband of Gaia, Mother Earth...
and threw his genitalia into the sea, the Erinyes emerged from the drops of blood, while Aphrodite
Aphrodite
Aphrodite is the Greek goddess of love, beauty, pleasure, and procreation.Her Roman equivalent is the goddess .Historically, her cult in Greece was imported from, or influenced by, the cult of Astarte in Phoenicia....
was born from the crests of seafoam. According to variant accounts, they emerged from an even more primordial level—from Nyx, "Night". Their number is usually left indeterminate. Virgil
Virgil
Publius Vergilius Maro, usually called Virgil or Vergil in English , was an ancient Roman poet of the Augustan period. He is known for three major works of Latin literature, the Eclogues , the Georgics, and the epic Aeneid...
, probably working from an Alexandria
Alexandria
Alexandria is the second-largest city of Egypt, with a population of 4.1 million, extending about along the coast of the Mediterranean Sea in the north central part of the country; it is also the largest city lying directly on the Mediterranean coast. It is Egypt's largest seaport, serving...
n source, recognized three: Alecto
Alecto
Alecto is one of the Erinyes in Greek mythology. According to Hesiod, she was the daughter of Gaea fertilized by the blood spilled from Uranus when Cronus castrated him. She is the sister of Tisiphone and Megaera...
("unnameable" who appeared in Virgil's Aeneid
Aeneid
The Aeneid is a Latin epic poem, written by Virgil between 29 and 19 BC, that tells the legendary story of Aeneas, a Trojan who travelled to Italy, where he became the ancestor of the Romans. It is composed of roughly 10,000 lines in dactylic hexameter...
), Megaera
Megaera
Megaera is one of the Erinyes, Eumenides or "Furies" in Greek mythology. Lamprière's Classical Dictionary states "According to the most received opinions, they were three in number, Tisiphone, Megara [sic] and Alecto" and "Megaera .....
("grudging"), and Tisiphone
Tisiphone
Tisiphone is the name of two figures in Greek mythology.-Erinyes:Tisiphone was one of the Erinyes or Furies, and sister of Alecto and Megaera. She was the one who punished crimes of murder: parricide, fratricide and homicide...
("vengeful destruction"). Dante
DANTE
Delivery of Advanced Network Technology to Europe is a not-for-profit organisation that plans, builds and operates the international networks that interconnect the various national research and education networks in Europe and surrounding regions...
followed Virgil in depicting the same three-charactered triptych
Triptych
A triptych , from tri-= "three" + ptysso= "to fold") is a work of art which is divided into three sections, or three carved panels which are hinged together and can be folded shut or displayed open. It is therefore a type of polyptych, the term for all multi-panel works...
of Erinyes; in Canto IX of the Inferno
Inferno (Dante)
Inferno is the first part of Dante Alighieri's 14th-century epic poem Divine Comedy. It is followed by Purgatorio and Paradiso. It is an allegory telling of the journey of Dante through what is largely the medieval concept of Hell, guided by the Roman poet Virgil. In the poem, Hell is depicted as...
they confront the poets at the gates of the city of Dis
Dis (Divine Comedy)
In Dante Alighieri's The Divine Comedy, the City of Dis encompasses the sixth through the ninth circles of Hell. The most serious sins are punished here, in lower Hell...
. The heads of the Erinyes were wreathed with serpent
Snake
Snakes are elongate, legless, carnivorous reptiles of the suborder Serpentes that can be distinguished from legless lizards by their lack of eyelids and external ears. Like all squamates, snakes are ectothermic, amniote vertebrates covered in overlapping scales...
s (compare Gorgon
Gorgon
In Greek mythology, the Gorgon was a terrifying female creature. The name derives from the Greek word gorgós, which means "dreadful." While descriptions of Gorgons vary across Greek literature, the term commonly refers to any of three sisters who had hair of living, venomous snakes, and a...
) and their eyes dripped with blood, rendering their appearance rather horrific. Other depictions show them with the wings of a bat or bird and the body of a dog.

In Aeschylus
Aeschylus
Aeschylus was the first of the three ancient Greek tragedians whose work has survived, the others being Sophocles and Euripides, and is often described as the father of tragedy. His name derives from the Greek word aiskhos , meaning "shame"...
's Oresteia, the story begins with Agamemnon's return home, to find that his wife, Clytemnestra, had married her lover, Aegisthus. Cassandra, daughter of Priam (who was awarded to Agememnon as part of the spoils of war) used her prophetic powers to see that Clymenestra and her lover plotted Agememnon's death. however Agememnon did not believe this, and while leaving the bath one day, was caught in a net planted by his wife and then slain by her lover. Their son, Orestes saw, and fled. When Orestes reached manhood, he was commanded by one of Apollo’s oracles to avenge his father‘s murder at his mother’s hand. Orestes hastened to follow Apollo’s orders. He returned home and revealed himself to his sister. However, to his mother, he pretended to be a messenger bringing her the news of her son’s death. Rather than showing remorse, as any normal mother would, Clytemnestra was overcome with joy. When Orestes saw this he realized that his mother suffered no remorse for her actions and slew Clytemnestra
Clytemnestra
Clytemnestra or Clytaemnestra , in ancient Greek legend, was the wife of Agamemnon, king of the Ancient Greek kingdom of Mycenae or Argos. In the Oresteia by Aeschylus, she was a femme fatale who murdered her husband, Agamemnon – said by Euripides to be her second husband – and the Trojan princess...
, while his friend Pylades slew her lover. Agamemnon
Agamemnon
In Greek mythology, Agamemnon was the son of King Atreus and Queen Aerope of Mycenae, the brother of Menelaus, the husband of Clytemnestra, and the father of Electra and Orestes. Mythical legends make him the king of Mycenae or Argos, thought to be different names for the same area...
was avenged. Although Orestes’ actions were what the god Apollo had commanded him to do, Orestes had still committed matricide and because of this, he was handed over to the terrible Erinyes. They pursued him relentlessly and upon reaching Delphi he was told by Apollo that he should bring from Taurus the statue of the goddess Artemis. The people of Taurus were known for habitually offering those who came to their shore as sacrifices. However, the priestess of Taurus was actually Orestes’ sister Iphigenia, who had been taken by Artemis to be her priestess when Agamemnon offered her as a sacrifice. With his sister’s help, Orestes managed to bring the statue back to Greece. The Furies, however were still not satisfied with this, so with Apollo’s guidance Orestes went to Athens and asked for a trial in the Areopagus (Judges in a court specifically appointed for murder. The Furies appeared as Orestes’ accusers, while Apollo spoke in defence. When the votes were cast there was an even amount for acquittal, and for condemnation. Athena was asked to vote, and she did so in Orestes’ favour. He was acquitted. After this process the Furies were satisfied and at this point the names changed to Eumenides, meaning ‘the kindly ones’. Orestes assumed the throne and married Hermione, daughter of Menelaus and Helen.

In Euripides Orestes (play)
Orestes (play)
Orestes is an Ancient Greek play by Euripides that follows the events of Orestes after he had murdered his mother.-Background:...
they are for the first time "equated" with the Eumenides (Εὐμενίδες, pl. of Εὐμενίς; literally "the gracious ones" but also translated as "Kindly Ones")
The source of this article is wikipedia, the free encyclopedia.  The text of this article is licensed under the GFDL.