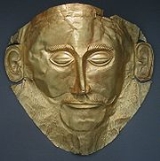 Overview
In Greek mythology
Greek mythology
Greek mythology is the body of myths and legends belonging to the ancient Greeks, concerning their gods and heroes, the nature of the world, and the origins and significance of their own cult and ritual practices. They were a part of religion in ancient Greece...
, Agamemnon (Ancient Greek
Greek language
Greek is an independent branch of the Indo-European family of languages. Native to the southern Balkans, it has the longest documented history of any Indo-European language, spanning 34 centuries of written records. Its writing system has been the Greek alphabet for the majority of its history;...
: ; modern Greek
Modern Greek
Modern Greek refers to the varieties of the Greek language spoken in the modern era. The beginning of the "modern" period of the language is often symbolically assigned to the fall of the Byzantine Empire in 1453, even though that date marks no clear linguistic boundary and many characteristic...
: Αγαμέμνονας, "very steadfast") was the son of King Atreus
Atreus
In Greek mythology, Atreus was a king of Mycenae, the son of Pelops and Hippodamia, and the father of Agamemnon and Menelaus. Collectively, his descendants are known as Atreidai or Atreidae....
and Queen Aerope
Aerope
Aërope was a name attributed to two distinct figures in Greek mythology.-Wife of Atreus:Aërope was a daughter of Catreus, king of Crete, and granddaughter of Minos. Her father, who had received an oracle that he should lose his life by one of his children, gave her and her sister, Clymene, to...
of Mycenae
Mycenae
Mycenae is an archaeological site in Greece, located about 90 km south-west of Athens, in the north-eastern Peloponnese. Argos is 11 km to the south; Corinth, 48 km to the north...
, the brother of Menelaus
Menelaus
Menelaus may refer to;*Menelaus, one of the two most known Atrides, a king of Sparta and son of Atreus and Aerope*Menelaus on the Moon, named after Menelaus of Alexandria.*Menelaus , brother of Ptolemy I Soter...
, the husband of Clytemnestra
Clytemnestra
Clytemnestra or Clytaemnestra , in ancient Greek legend, was the wife of Agamemnon, king of the Ancient Greek kingdom of Mycenae or Argos. In the Oresteia by Aeschylus, she was a femme fatale who murdered her husband, Agamemnon – said by Euripides to be her second husband – and the Trojan princess...
, and the father of Electra
Electra
In Greek mythology, Electra was an Argive princess and daughter of King Agamemnon and Queen Clytemnestra. She and her brother Orestes plotted revenge against their mother Clytemnestra and stepfather Aegisthus for the murder of their father Agamemnon...
and Orestes
Orestes
Orestes was the son of Agamemnon in Greek mythology; Orestes may also refer to:Drama*Orestes , by Euripides*Orestes, the character in Sophocles' tragedy Electra*Orestes, the character in Aeschylus' trilogy of tragedies, Oresteia...
. Mythical legends make him the king of Mycenae or Argos
Argos
Argos is a city and a former municipality in Argolis, Peloponnese, Greece. Since the 2011 local government reform it is part of the municipality Argos-Mykines, of which it is a municipal unit. It is 11 kilometres from Nafplion, which was its historic harbour...
, thought to be different names for the same area. When Helen, the wife of Menelaus, was abducted by Paris
Paris (mythology)
Paris , the son of Priam, king of Troy, appears in a number of Greek legends. Probably the best-known was his elopement with Helen, queen of Sparta, this being one of the immediate causes of the Trojan War...
of Troy
Troy
Troy was a city, both factual and legendary, located in northwest Anatolia in what is now Turkey, southeast of the Dardanelles and beside Mount Ida...
, Agamemnon commanded the united Greek armed forces in the ensuing Trojan War
Trojan War
In Greek mythology, the Trojan War was waged against the city of Troy by the Achaeans after Paris of Troy took Helen from her husband Menelaus, the king of Sparta. The war is among the most important events in Greek mythology and was narrated in many works of Greek literature, including the Iliad...
.

Upon Agamemnon's return from Troy he was murdered (according to the fullest version of the oldest surviving account, Odyssey
Odyssey
The Odyssey is one of two major ancient Greek epic poems attributed to Homer. It is, in part, a sequel to the Iliad, the other work ascribed to Homer. The poem is fundamental to the modern Western canon, and is the second—the Iliad being the first—extant work of Western literature...
Book 11, l.409f.) by Aegisthus, the lover of his wife Clytemnestra.

Can you tell me some similarities between Priam and Agamemnon?
More

Why did he die
More
x