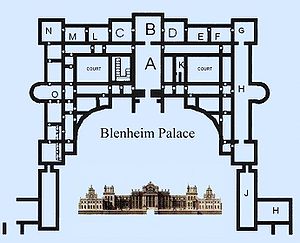 In architecture
Architecture
Architecture is both the process and product of planning, designing and construction. Architectural works, in the material form of buildings, are often perceived as cultural and political symbols and as works of art...
, an enfilade is a suite of rooms formally aligned with each other. This was a common feature in grand European architecture from the Baroque
Baroque
The Baroque is a period and the style that used exaggerated motion and clear, easily interpreted detail to produce drama, tension, exuberance, and grandeur in sculpture, painting, literature, dance, and music...
period onwards, although there are earlier examples, such as the Vatican stanze
Raphael Rooms
The four Stanze di Raffaello in the Palace of the Vatican form a suite of reception rooms, the public part of the papal apartments. They are famous for their frescoes, painted by Raphael and his workshop...
. The doors entering each room are aligned with the doors of the connecting rooms along a single axis, providing a vista through the entire suite of rooms. The enfilade can be used as a processional route, and is a common arrangement in museums and art galleries, as it facilitates the movement of large numbers of people through a building.

In a Baroque palace, access down an enfilade suite of state room
State room
A state room in a large European mansion is usually one of a suite of very grand rooms which were designed to impress. The term was most widely used in the 17th and 18th centuries. They were the most lavishly decorated in the house and contained the finest works of art...
s was typically restricted by the rank or degree of intimacy of the visitor. The first rooms were more public, and at the end was usually the bedroom, sometimes with an intimate cabinet
Cabinet (room)
A cabinet was one of a number of terms for a private room in the domestic architecture and that of palaces of early modern Europe, a room serving as a study or retreat, usually for a man. The cabinet would be furnished with books and works of art, and sited adjacent to his bedchamber, the...
or boudoir
Boudoir
A boudoir is a lady's private bedroom, sitting room or dressing room. The term derives from the French verb bouder, meaning "to be sulky" or boudeur, meaning "sulky".- In architecture :...
beyond. Baroque protocol
Protocol (diplomacy)
In international politics, protocol is the etiquette of diplomacy and affairs of state.A protocol is a rule which guides how an activity should be performed, especially in the field of diplomacy. In diplomatic services and governmental fields of endeavor protocols are often unwritten guidelines...
dictated that visitors of lower rank than their host would be escorted by servants down the enfilade to the farthest room their status allowed. If the visitor was of equal or higher access, the host would himself advance down the enfilade to meet his guest, before taking him back. At parting, the same ritual would be observed, though the host might pay his guest a compliment by taking him back further than his rank strictly dictated. If a person of much higher rank visited, these rituals extended beyond the enfilade to the entrance hall, the gates to the palace, or beyond (in modern State visit
State visit
A state visit is a formal visit by a foreign head of state to another nation, at the invitation of that nation's head of state. State visits are the highest form of diplomatic contact between two nations, and are marked by ceremonial pomp and diplomatic protocol. In parliamentary democracies, heads...
s, to the airport
Airport
An airport is a location where aircraft such as fixed-wing aircraft, helicopters, and blimps take off and land. Aircraft may be stored or maintained at an airport...
). Memoirs and letters of the period often note the exact details of where meetings and partings occurred, even to whether they were in the centre of the room, or at the door.

Royal palaces often had separate enfiladed state apartments for the King and Queen, as at the Palace of Versailles
Palace of Versailles
The Palace of Versailles , or simply Versailles, is a royal château in Versailles in the Île-de-France region of France. In French it is the Château de Versailles....
, with the Grand appartement du roi
Grand appartement du roi
This article is about the grand appartement du roi of the Palace of Versailles.As a result of Louis LeVau’s envelope of Louis XIII’s château, the king and queen had new apartments in the new addition, known at the time as the château neuf...
and the Grand appartement de la reine
Grand appartement de la reine
This article is about the grand appartement de la reine of the Palace of Versailles.Forming a parallel enfilade with that of the grand appartement du roi, the grand appartement de la reine served as the residence of three queens of France — Marie-Thérèse d’Autriche, wife of Louis XIV; Marie...
(not to mention the Petit appartement du roi
Petit appartement du roi
The petit appartement du roi of the Palace of Versailles is a suite of rooms used by Louis XIV, Louis XV, and Louis XVI. Located on the first floor of the palace, the rooms are found in the oldest part of the palace dating from the reign of Louis XIII. Under Louis XIV, these rooms housed the...
), or at Hampton Court Palace
Hampton Court Palace
Hampton Court Palace is a royal palace in the London Borough of Richmond upon Thames, Greater London; it has not been inhabited by the British royal family since the 18th century. The palace is located south west of Charing Cross and upstream of Central London on the River Thames...
. Such suites were also used for entertaining. Noblemen's houses, especially if a visit from the monarch was hoped for, also often feature enfiladed suites, as at Chatsworth House
Chatsworth House
Chatsworth House is a stately home in North Derbyshire, England, northeast of Bakewell and west of Chesterfield . It is the seat of the Duke of Devonshire, and has been home to his family, the Cavendish family, since Bess of Hardwick settled at Chatsworth in 1549.Standing on the east bank of the...
, Blenheim Palace
Blenheim Palace
Blenheim Palace  is a monumental country house situated in Woodstock, Oxfordshire, England, residence of the dukes of Marlborough. It is the only non-royal non-episcopal country house in England to hold the title of palace. The palace, one of England's largest houses, was built between...
, the Château de Louveciennes
Château de Louveciennes
The Château de Louveciennes in Louveciennes, in the Yvelines department of France, is composed of the château itself, constructed at the end of the 17th century. It was then expanded and redecorated by Ange-Jacques Gabriel for Madame du Barry in the 18th century, and the music pavilion was...
or Boughton House
Boughton House
Boughton House is a country house about north-east of Kettering off the A43 road near Geddington in Northamptonshire, England, which belongs to the Duke of Buccleuch.-History:...
. The bedrooms in such suites were often only slept in on royal visits, though like many grand bedrooms before the 19th century, they might be used for other purposes. Other enfilades culminated in a room used as a throne room
Throne room
A throne room is the room, often rather a hall, in the official residence of the crown, either a palace or a fortified castle, where the throne of a senior figure is set up with elaborate pomp— usually raised, often with steps, and under a canopy, both of which are part of the original notion of...
- the Palace of Westminster
Palace of Westminster
The Palace of Westminster, also known as the Houses of Parliament or Westminster Palace, is the meeting place of the two houses of the Parliament of the United Kingdom—the House of Lords and the House of Commons...
below comes into this category, as the monarch sits on a throne in the chamber of the House of Lords
House of Lords
The House of Lords is the upper house of the Parliament of the United Kingdom. Like the House of Commons, it meets in the Palace of Westminster....
during the State Opening of Parliament
State Opening of Parliament
In the United Kingdom, the State Opening of Parliament is an annual event that marks the commencement of a session of the Parliament of the United Kingdom. It is held in the House of Lords Chamber, usually in November or December or, in a general election year, when the new Parliament first assembles...
.

Sir Charles Barry
Charles Barry
Sir Charles Barry FRS was an English architect, best known for his role in the rebuilding of the Palace of Westminster in London during the mid-19th century, but also responsible for numerous other buildings and gardens.- Background and training :Born on 23 May 1795 in Bridge Street, Westminster...
's Palace of Westminster
Palace of Westminster
The Palace of Westminster, also known as the Houses of Parliament or Westminster Palace, is the meeting place of the two houses of the Parliament of the United Kingdom—the House of Lords and the House of Commons...
, more commonly known as the Houses of Parliament, has an enfilade of three Royal apartments which continues through the two legislative Chambers of the Lords and Commons. The enfilade of State Rooms presents a view from the Robing Room and Royal Gallery - B and C on the plan at right - through to the Prince's Chamber. From the throne
Throne
A throne is the official chair or seat upon which a monarch is seated on state or ceremonial occasions. "Throne" in an abstract sense can also refer to the monarchy or the Crown itself, an instance of metonymy, and is also used in many expressions such as "the power behind the...
in the adjacent Lords' Chamber (D) there is an uninterrupted view through three lobbies - Lords', Central, and Members' Lobby
Members' Lobby
The Members' Lobby is a hallway in the Palace of Westminster used by members of the House of Commons, the lower house of the Parliament of the United Kingdom...
- to the Speaker's Chair in the Commons Chamber at the other end of the Palace. (Lords' Lobby and Members' Lobby are the round and square spaces to the left and right of E on the Plan.)

Barry also used a number of enfilades in his National Gallery, London
National Gallery, London
The National Gallery is an art museum on Trafalgar Square, London, United Kingdom. Founded in 1824, it houses a collection of over 2,300 paintings dating from the mid-13th century to 1900. The gallery is an exempt charity, and a non-departmental public body of the Department for Culture, Media...
, built as an art gallery
Art gallery
An art gallery or art museum is a building or space for the exhibition of art, usually visual art.Museums can be public or private, but what distinguishes a museum is the ownership of a collection...
, and these have been extended and added to in the recent Sainsbury Wing, despite the wing being at an angle to the earlier building, so that now the view down the longest enfilade goes across fifteen rooms.