An eddy current brake, like a conventional friction
Friction
Friction is the force resisting the relative motion of solid surfaces, fluid layers, and/or material elements sliding against each other. There are several types of friction:...
brake
Brake
A brake is a mechanical device which inhibits motion. Its opposite component is a clutch. The rest of this article is dedicated to various types of vehicular brakes....
, is responsible for slowing an object, such as a train or a roller coaster. However, unlike electro-mechanical brakes, which apply mechanical pressure on two separate objects, eddy current brakes slow an object by creating eddy currents through electromagnetic induction
Electromagnetic induction
Electromagnetic induction is the production of an electric current across a conductor moving through a magnetic field. It underlies the operation of generators, transformers, induction motors, electric motors, synchronous motors, and solenoids....
which create resistance, and in turn either heat or electricity. 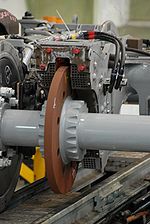 The linear eddy current brake consists of a magnetic yoke with electrical coils positioned along the rail, which are being magnetized alternating as south and north magnetic poles. This magnet does not touch the rail, as with the magnetic brake, but is held at a constant small distance from the rail (approximately seven millimeters).

The braking energy of the vehicle is converted in eddy current losses which lead to a warming of the rail. (The regular magnetic brake, in wide use in railways, exerts its braking force by friction with the rail, which also creates heat.)

The first train in commercial circulation to use such a braking system has been the ICE 3
Siemens Velaro
Siemens Velaro is a family of high-speed EMU trains used in Europe and China. The Velaro is based on Deutsche Bahn's ICE 3 high-speed trains, but is a full Siemens product unlike the ICE 3 which involved other manufacturers....
.

Modern roller coaster
Roller coaster
The roller coaster is a popular amusement ride developed for amusement parks and modern theme parks. LaMarcus Adna Thompson patented the first coasters on January 20, 1885...
s also use this type of braking, but in order to avoid the risk of potential power outage
Power outage
A power outage is a short- or long-term loss of the electric power to an area.There are many causes of power failures in an electricity network...
s, they utilize permanent magnets instead of electromagnets, thus not requiring any power supply, however, without the possibility to adjust the braking strength as easily as with electromagnets.