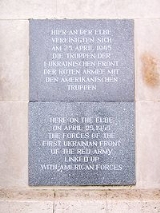 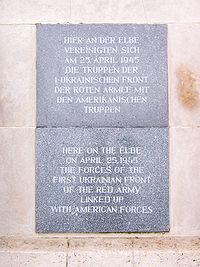 Elbe Day, April 25, 1945, was the date Soviet
Soviet Union
The Soviet Union , officially the Union of Soviet Socialist Republics , was a constitutionally socialist state that existed in Eurasia between 1922 and 1991....
and American troops met at the River Elbe
Elbe
The Elbe is one of the major rivers of Central Europe. It rises in the Krkonoše Mountains of the northwestern Czech Republic before traversing much of Bohemia , then Germany and flowing into the North Sea at Cuxhaven, 110 km northwest of Hamburg...
, near Torgau
Torgau
Torgau is a town on the banks of the Elbe in northwestern Saxony, Germany. It is the capital of the district Nordsachsen.Outside Germany, the town is most well known as the place where during the Second World War, United States Army forces coming from the west met with forces of the Soviet Union...
in Germany
Germany
Germany , officially the Federal Republic of Germany , is a federal parliamentary republic in Europe. The country consists of 16 states while the capital and largest city is Berlin. Germany covers an area of 357,021 km2 and has a largely temperate seasonal climate...
, marking an important step toward the end of the World War II
World War II
World War II, or the Second World War , was a global conflict lasting from 1939 to 1945, involving most of the world's nations—including all of the great powers—eventually forming two opposing military alliances: the Allies and the Axis...
in Europe
Europe
Europe is, by convention, one of the world's seven continents. Comprising the westernmost peninsula of Eurasia, Europe is generally 'divided' from Asia to its east by the watershed divides of the Ural and Caucasus Mountains, the Ural River, the Caspian and Black Seas, and the waterways connecting...
. The first contact was made between patrols near Strehla
Strehla
Strehla is a place in the district of Meißen, Saxony, Germany. It is located at the Elbe north of Riesa. This place name means arrow in Sorbian.-History:...
, when First Lieutenant
First Lieutenant
First lieutenant is a military rank and, in some forces, an appointment.The rank of lieutenant has different meanings in different military formations , but the majority of cases it is common for it to be sub-divided into a senior and junior rank...
Albert Kotzebue crossed the River Elbe in a boat with three men of an intelligence and reconnaissance platoon. On the east bank, they met forward elements of a Soviet Guards-rifle-regiment of the First Ukrainian Front under the command of Lieutenant Colonel
Lieutenant colonel
Lieutenant colonel is a rank of commissioned officer in the armies and most marine forces and some air forces of the world, typically ranking above a major and below a colonel. The rank of lieutenant colonel is often shortened to simply "colonel" in conversation and in unofficial correspondence...
Alexander Gardiev. The same day, another patrol under Second Lieutenant
Second Lieutenant
Second lieutenant is a junior commissioned officer military rank in many armed forces.- United Kingdom and Commonwealth :The rank second lieutenant was introduced throughout the British Army in 1871 to replace the rank of ensign , although it had long been used in the Royal Artillery, Royal...
William Robertson with Frank Huff, James McDonnell and Paul Staub met Soviet Lieutenant
Lieutenant
A lieutenant is a junior commissioned officer in many nations' armed forces. Typically, the rank of lieutenant in naval usage, while still a junior officer rank, is senior to the army rank...
Alexander Silvashko with some soldiers on the destroyed Elbe bridge of Torgau.

On April 26, the commanders of the 69th Infantry Division of the First Army
U.S. First Army
The First United States Army is a field army of the United States Army. It now serves a mobilization, readiness and training command.- Establishment and World War I :...
and the 58th Guards Rifle Division of the 5th Guards Army (Soviet Union)
5th Guards Army (Soviet Union)
The 5th Guards Army was a Soviet Guards formation which fought in many critical actions during World War II under the command of General Aleksei Semenovich Zhadov....
met at Torgau, southwest of Berlin
Berlin
Berlin is the capital city of Germany and is one of the 16 states of Germany. With a population of 3.45 million people, Berlin is Germany's largest city. It is the second most populous city proper and the seventh most populous urban area in the European Union...
. Arrangements were made for the formal "Handshake of Torgau" between Robertson and Silvashko in front of photographers the following day (pictured). Statements were released simultaneously in London
London
London is the capital city of :England and the :United Kingdom, the largest metropolitan area in the United Kingdom, and the largest urban zone in the European Union by most measures. Located on the River Thames, London has been a major settlement for two millennia, its history going back to its...
, Moscow
Moscow
Moscow is the capital, the most populous city, and the most populous federal subject of Russia. The city is a major political, economic, cultural, scientific, religious, financial, educational, and transportation centre of Russia and the continent...
, and Washington
Washington, D.C.
Washington, D.C., formally the District of Columbia and commonly referred to as Washington, "the District", or simply D.C., is the capital of the United States. On July 16, 1790, the United States Congress approved the creation of a permanent national capital as permitted by the U.S. Constitution....
that evening, reaffirming the determination of the three Allied powers to complete the destruction of the Third Reich.