Encyclopedia
The city of Ekron was one of the five cities of the famed Philistine pentapolis
Pentapolis
A pentapolis, from the Greek words , "five" and , "city" is a geographic and/or institutional grouping of five cities...
, located in southwestern Canaan
Canaan
Canaan is a historical region roughly corresponding to modern-day Israel, Palestine, Lebanon, and the western parts of Jordan...
. Ekron lies 35 kilometers west of Jerusalem, and 18 kilometers north of ancient Gath, on the eastern edge of Israel's coastal plain.

The site of Tel Miqne was lightly occupied beginning in the Chalcolithic period and up to the Early Bronze Age. After a 400-year gap when only the upper tel was occupied, the city underwent a major expansion c.1600 BCE, under the Canaanites.
The Canaanite city had shrunk in the years before its main public building burned in the 13th century BCE, during the Bronze Age collapse
Bronze Age collapse
The Bronze Age collapse is a transition in southwestern Asia and the Eastern Mediterranean from the Late Bronze Age to the Early Iron Age that some historians believe was violent, sudden and culturally disruptive...
, a period of general devastation associated with the Sea Peoples
Sea Peoples
The Sea Peoples were a confederacy of seafaring raiders of the second millennium BC who sailed into the eastern Mediterranean, caused political unrest, and attempted to enter or control Egyptian territory during the late 19th dynasty and especially during year 8 of Ramesses III of the 20th Dynasty...
. It was re-established by Philistines at the beginning of the Iron Age, c.12th century BCE. During the Iron Age
Iron Age
The Iron Age is the archaeological period generally occurring after the Bronze Age, marked by the prevalent use of iron. The early period of the age is characterized by the widespread use of iron or steel. The adoption of such material coincided with other changes in society, including differing...
, Ekron was a border city on the frontier contested between Philistia and the kingdom of Judah
Kingdom of Judah
The Kingdom of Judah was a Jewish state established in the Southern Levant during the Iron Age. It is often referred to as the "Southern Kingdom" to distinguish it from the northern Kingdom of Israel....
.

Records of the Neo-Assyrian Empire also refer to Ekron. The siege of Ekron in 712 BCE is depicted on one of Sargon II
Sargon II
Sargon II was an Assyrian king. Sargon II became co-regent with Shalmaneser V in 722 BC, and became the sole ruler of the kingdom of Assyria in 722 BC after the death of Shalmaneser V. It is not clear whether he was the son of Tiglath-Pileser III or a usurper unrelated to the royal family...
's wall reliefs in his palace at Khorsabad, which names the city. Ekron revolted against Sennacherib
Sennacherib
Sennacherib |Sîn]] has replaced brothers for me"; Aramaic: ) was the son of Sargon II, whom he succeeded on the throne of Assyria .-Rise to power:...
and expelled Padi, his governor, who was sent to Hezekiah
Hezekiah
Hezekiah was the son of Ahaz and the 14th king of Judah. Edwin Thiele has concluded that his reign was between c. 715 and 686 BC. He is also one of the most prominent kings of Judah mentioned in the Hebrew Bible....
, in Jerusalem, for safe-keeping. Sennacherib marched against Ekron and the Ekronites called upon the aid of the king of Mutsri. Sennacherib turned aside to defeat this army, which he did at Eltekeh, and then returned and took the city by storm, put to death the leaders of the revolt and carried their adherents into captivity. This campaign led to the famous attack of Sennacherib on Hezekiah and Jerusalem, in which Sennacherib compelled Hezekiah to restore Padi, who was reinstated as governor at Ekron. Ashdod and Ekron survived to become powerful city-states dominated by Assyria
Assyria
Assyria was a Semitic Akkadian kingdom, extant as a nation state from the mid–23rd century BC to 608 BC centred on the Upper Tigris river, in northern Mesopotamia , that came to rule regional empires a number of times through history. It was named for its original capital, the ancient city of Assur...
in the 7th century BCE. The city may have been destroyed by the Neo-Babylonian King Nebuchadnezzer II between 604 BCE and 562 BCE, but it is mentioned, as "Accaron", as late as 1 Maccabees
1 Maccabees
The First book of Maccabees is a book written in Hebrew by a Jewish author after the restoration of an independent Jewish kingdom, about the latter part of the 2nd century BC. The original Hebrew is lost and the most important surviving version is the Greek translation contained in the Septuagint...
10:89 (2nd century BCE).

Robinson
Edward Robinson (scholar)
Edward Robinson was an American biblical scholar, known as the “Father of Biblical Geography.” He has been referred to as the “founder of modern Palestinology.” -Biography:...
identified the Arab village of Aqir
Aqir
Aqir was a Palestinian Arab village in the District of Ramle located 9 km southwest of Ramla and 1 km north of Wadi al-Nasufiyya .-History:...
as the site of Ekron in 1838, and this was accepted until it was contested by Macalister in 1913, who suggested Khirbet Dikerin, and Albright
William F. Albright
William Foxwell Albright was an American archaeologist, biblical scholar, philologist and expert on ceramics. From the early twentieth century until his death, he was the dean of biblical archaeologists and the universally acknowledged founder of the Biblical archaeology movement...
in 1922, who suggested Qatra
Qatra
Qatra was a Palestinian Arab village located southwest of the city of Ramla and west of Jerusalem, some above sea level.- History :Qatra was a Canaanite center of political and economic authority that along with 30 other urban sites in regions bordering the Mediterranean sea, entered a period...
. The identification of Ekron as Tel Mikne (Tel Miqne, Khirbet Muqanna) was suggested by Naveh and Kallai in 1957–1958, a theory widely accepted in light of a royal dedication inscription found during the 1996 excavations.

Ekron is mentioned in

"This is the land that still remains: all the regions of the Philistines and all those of the Geshurites from Shihor, which is east of Egypt, northward to the boundary of Ekron."

There was a noted sanctuary of Baal
Baal
Baʿal is a Northwest Semitic title and honorific meaning "master" or "lord" that is used for various gods who were patrons of cities in the Levant and Asia Minor, cognate to Akkadian Bēlu...
at Ekron. The Baal who was worshipped was called Baal Zebul, which some scholars connect with Beelzebub
Beelzebub
Beelzebub -Religious meaning:Ba‘al Zəbûb is variously understood to mean "lord of flies", or "lord of the dwelling". Originally the name of a Philistine god, Beelzebub is also identified in the New Testament as Satan, the "prince of the demons". In Arabic the name is retained as Ba‘al dhubaab /...
, known from the Hebrew Bible :

Ahaziah
Ahaziah
Ahaziah "; Douay-Rheims: Ochozias) was the name of two kings:*Ahaziah of Israel*Ahaziah of Judah...
fell through the lattice in his upper chamber at Samaria
Samaria
Samaria, or the Shomron is a term used for a mountainous region roughly corresponding to the northern part of the West Bank.- Etymology :...
and was injured. So he sent messengers whom he instructed: "Go inquire of Baal-zebub, the god of Ekron, whether I shall recover from this injury." (JPS translation)

The mound of Tel Miqne has a 10 acre upper tell and a lower tell that ranged from 40 to 65 acres at various times in history. 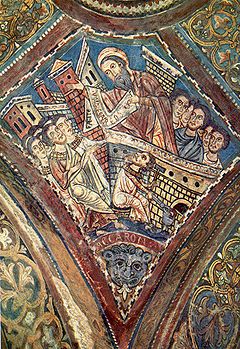 Of more than local interest is the recipient of the inscription, 'Akish's divine "Lady. May she bless him, and guard him, and prolong his days, and bless his land." The name or title of the Lady of Ekron is Ptgyh or Ptnyh. Aaron Demsky (Demsky 1997) reads the name as Ptnyh and relates it to the title Potnia theron
Potnia Theron
Potnia Theron is a term first used by Homer and often used to describe female divinities associated with animals...
(Mistress of the Animals) that was applied to the Great Goddess
Great Goddess
Great Goddess refers to the concept of an almighty goddess, or to the concept of a mother goddess, including:*Great Goddess, anglicized form of the Latin Magna Dea*Great Goddess, anglicized form of the Sanskrit Mahadevi, the Shakti sum of all goddesses...
of the Aegean, in her various local manifestations, which include Mycenaean sites. A much earlier representation of the Lady of Ekron, perhaps thirteenth century BCE offers her left breast.