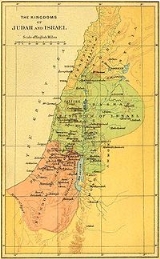 Overview
The Kingdom of Judah ( (Mamlekhet Yehuda) was a Jewish state established in the Southern Levant
Southern Levant
The Levant is the geographical region bordering the Mediterranean, roughly between Egypt and Anatolia . The Southern Levant is roughly encompassed by Palestine, the West Bank, the Gaza Strip, along with the modern sovereign states of Israel, Jordan and the southern part of Lebanon.Although the term...
during the Iron Age
Iron Age
The Iron Age is the archaeological period generally occurring after the Bronze Age, marked by the prevalent use of iron. The early period of the age is characterized by the widespread use of iron or steel. The adoption of such material coincided with other changes in society, including differing...
. It is often referred to as the "Southern Kingdom" to distinguish it from the northern Kingdom of Israel.

Judah emerged as a state probably no earlier than the 9th century BCE, but the subject is one of considerable controversy. In the 7th century BCE, The Kingdom capital Jerusalem became a city with a population many times greater than before and clear dominance over its neighbours, probably as the result of a cooperative arrangement with the Assyria
Assyria
Assyria was a Semitic Akkadian kingdom, extant as a nation state from the mid–23rd century BC to 608 BC centred on the Upper Tigris river, in northern Mesopotamia , that came to rule regional empires a number of times through history. It was named for its original capital, the ancient city of Assur...
ns, who wished to establish Judah as a pro-Assyrian vassal state
Vassal state
A vassal state is any state that is subordinate to another. The vassal in these cases is the ruler, rather than the state itself. Being a vassal most commonly implies providing military assistance to the dominant state when requested to do so; it sometimes implies paying tribute, but a state which...
controlling the valuable olive industry.

How long long did the Kingdom of Judah have independence?

What were their schools like? How important was education to them? What kind of jobs and rights did the people have? What was their daily life like...

Did the rulers care about art?
More
x