Encyclopedia
Edward Robinson was an American
United States
The United States of America is a federal constitutional republic comprising fifty states and a federal district...
biblical scholar, known as the “Father of Biblical Geography.” He has been referred to as the “founder of modern Palestinology.”

Robinson was born in Southington, Connecticut
Southington, Connecticut
Southington is a town in Hartford County, Connecticut, United States. It is part of Connecticut's 1st congressional district. It is situated about 20 miles southwest of Hartford, about 80 miles northeast of New York City, 105 miles southwest of Boston and 77 miles west of Providence...
and raised on a farm. He taught at East Haven
East Haven, Connecticut
East Haven is a town in New Haven County, Connecticut, in the United States. As of the 2000 census, the town population was 28,189. The town is just 3 minutes from downtown New Haven...
and Farmington
Farmington, Connecticut
Farmington is a town located in Hartford County in the Farmington Valley area of central Connecticut in the United States. The population was 25,340 at the 2010 census. It is home to the world headquarters of several large corporations including Carrier Corporation, Otis Elevator Company, and Carvel...
in 1810-11. He then attended Hamilton College, Clinton, N. Y.
Clinton, Oneida County, New York
Clinton is a village in Oneida County, New York, United States. The population was 1,952 at the 2000 census. It was named for George Clinton, a royal governor of the colony of New York....
, where his uncle, Seth Norton, was a professor. He graduated in 1816, and in 1821 went to Andover, Massachusetts
Andover, Massachusetts
Andover is a town in Essex County, Massachusetts, United States. It was incorporated in 1646 and as of the 2010 census, the population was 33,201...
, to publish his edition of books i-ix, xviii and xix of the Iliad
Iliad
The Iliad is an epic poem in dactylic hexameters, traditionally attributed to Homer. Set during the Trojan War, the ten-year siege of the city of Troy by a coalition of Greek states, it tells of the battles and events during the weeks of a quarrel between King Agamemnon and the warrior Achilles...
. There he aided Moses Stuart
Moses Stuart
Moses Stuart , an American biblical scholar, was born in Wilton, Connecticut.-Life and career:He was reared on a farm graduating with highest honours at Yale in 1799; in 1802 he was admitted to the Connecticut bar and was appointed as a tutor at Yale, where he remained for two years...
in the preparation of the second edition (1823) of the latter's Hebrew Grammar, and rendered into English (1825) Wahl's Clavis Philologica Novi Testamenti. After Europe
Europe
Europe is, by convention, one of the world's seven continents. Comprising the westernmost peninsula of Eurasia, Europe is generally 'divided' from Asia to its east by the watershed divides of the Ural and Caucasus Mountains, the Ural River, the Caspian and Black Seas, and the waterways connecting...
an study, largely in Halle and Berlin
Berlin
Berlin is the capital city of Germany and is one of the 16 states of Germany. With a population of 3.45 million people, Berlin is Germany's largest city. It is the second most populous city proper and the seventh most populous urban area in the European Union...
(1826-30), he returned to the United States
United States
The United States of America is a federal constitutional republic comprising fifty states and a federal district...
where he was made professor extraordinary of sacred literature at Andover Theological Seminary (1830-33). 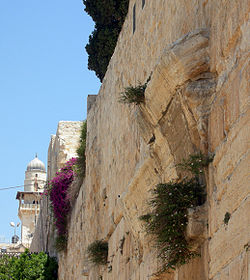 Robinson traveled to Palestine
Holy Land
The Holy Land is a term which in Judaism refers to the Kingdom of Israel as defined in the Tanakh. For Jews, the Land's identifiction of being Holy is defined in Judaism by its differentiation from other lands by virtue of the practice of Judaism often possible only in the Land of Israel...
in 1838 in the company of Rev. Eli Smith
Eli Smith
Eli Smith was an American Protestant Missionary and scholar, born at Northford, Conn. He graduated from Yale in 1821 and from Andover Theological Seminary in 1826. He worked in Malta until 1829, then in company with H. G. O. Dwight traveled through Armenia and Georgia to Persia. They published...
, leading to the publication of Biblical Researches in Palestine and Adjacent Countries for which he was awarded the Gold Medal of the Royal Geographical Society
Royal Geographical Society
The Royal Geographical Society is a British learned society founded in 1830 for the advancement of geographical sciences...
in 1842. He was elected a Fellow of the American Academy of Arts and Sciences
American Academy of Arts and Sciences
The American Academy of Arts and Sciences is an independent policy research center that conducts multidisciplinary studies of complex and emerging problems. The Academy’s elected members are leaders in the academic disciplines, the arts, business, and public affairs.James Bowdoin, John Adams, and...
in 1847. Robinson, together with Smith, made scores of identifications of ancient places, including the tunnel dug by Hezekiah
Hezekiah
Hezekiah was the son of Ahaz and the 14th king of Judah. Edwin Thiele has concluded that his reign was between c. 715 and 686 BC. He is also one of the most prominent kings of Judah mentioned in the Hebrew Bible....
shortly before the Assyrian siege of Jerusalem in 701/02 BCE, though the inscription at the southern end of the tunnel was to be found later. Robinson's Arch
Robinson's Arch
Robinson's Arch is the name given to an arch that once stood at the southwestern corner of the Temple Mount. It was built during the reconstruction of the Second Temple initiated by Herod the Great at the end of the 1st century BCE. The massive stone span was constructed along with the retaining...
in the Old City of Jerusalem is named after him. They returned for further investigations in 1852.


Revised editions of the Greek and English “Harmonies,” edited by Matthew B. Riddle, were published in 1885 and 1886.