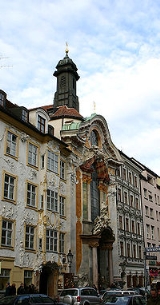 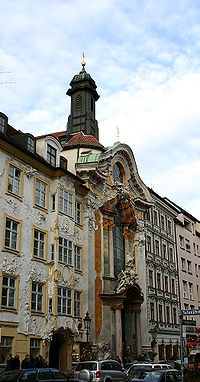 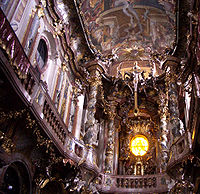 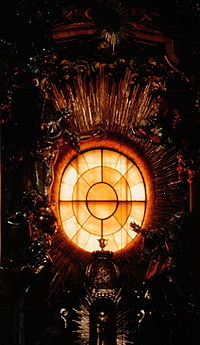 Egid Quirin Asam was a German
Germans
The Germans are a Germanic ethnic group native to Central Europe. The English term Germans has referred to the German-speaking population of the Holy Roman Empire since the Late Middle Ages....
plasterer
Plasterer
A plasterer is a tradesman who works with plaster, such as forming a layer of plaster on an interior wall or plaster decorative moldings on ceilings or walls...
and sculptor active during the period of the Late Baroque
Baroque sculpture
Baroque sculpture is the sculpture associated with the Baroque cultural movement, a movement often identified with the existence of important Baroque art and architecture in non-absolutist and Protestant states.-Course:...
.

Born in Tegernsee
Tegernsee
Tegernsee is a town in the Miesbach district of Bavaria, Germany. It is located on the shore of Tegernsee lake, at an elevation of 747 m above sea level....
, Bavaria
Bavaria
Bavaria, formally the Free State of Bavaria is a state of Germany, located in the southeast of Germany. With an area of , it is the largest state by area, forming almost 20% of the total land area of Germany...
, Asam worked mainly together with his brother, the architect and painter Cosmas Damian Asam
Cosmas Damian Asam
Cosmas Damian Asam was a German painter and architect during the late Baroque period. Born in Benediktbeuern, he moved to Rome in 1711 to study at the Accademia di San Luca with Carlo Maratta. There, he could see the fresco Ascensione di Cristo by Melozzo da Forlì in Santi Apostoli Church...
. Because of this, their common work is often attributed to the Asam Brothers
Asam brothers
The Asam Brothers were sculptors, workers in stucco, painters, and architects, who worked mostly together and in southern Germany...
. Asam died in Mannheim
Mannheim
Mannheim is a city in southwestern Germany. With about 315,000 inhabitants, Mannheim is the second-largest city in the Bundesland of Baden-Württemberg, following the capital city of Stuttgart....
.

The Asam Brothers, singularly and together, were very prolific artists. Some of their major works were: