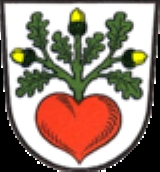 Encyclopedia
Egelsbach is a community of 10,000 in the Offenbach district
Offenbach (district)
Offenbach is a Kreis in the south of Hesse, Germany and is part of the Frankfurt/Rhine-Main Metropolitan Region. Neighbourhood districts are Main-Kinzig, Aschaffenburg, Darmstadt-Dieburg, Groß-Gerau and the cities of Darmstadt, Frankfurt and Offenbach.-History:The district Offenbach was first...
in the Regierungsbezirk
Regierungsbezirk
In Germany, a Government District, in German: Regierungsbezirk – is a subdivision of certain federal states .They are above the Kreise, Landkreise, and kreisfreie Städte...
of Darmstadt
Darmstadt (region)
Darmstadt is one of the three Regierungsbezirke of Hesse, Germany, located in the south of the state.- External links :*...
in Hesse
Hesse
Hesse or Hessia is both a cultural region of Germany and the name of an individual German state.* The cultural region of Hesse includes both the State of Hesse and the area known as Rhenish Hesse in the neighbouring Rhineland-Palatinate state...
, Germany
Germany
Germany , officially the Federal Republic of Germany , is a federal parliamentary republic in Europe. The country consists of 16 states while the capital and largest city is Berlin. Germany covers an area of 357,021 km2 and has a largely temperate seasonal climate...
.

Egelsbach is one of 13 communities in the Offenbach district. The community lies in the Frankfurt Rhine Main Region south of the Main between Frankfurt am Main and Darmstadt
Darmstadt
Darmstadt is a city in the Bundesland of Hesse in Germany, located in the southern part of the Rhine Main Area.The sandy soils in the Darmstadt area, ill-suited for agriculture in times before industrial fertilisation, prevented any larger settlement from developing, until the city became the seat...
at an elevation of 117 m above sea level
Sea level
Mean sea level is a measure of the average height of the ocean's surface ; used as a standard in reckoning land elevation...
.

Egelsbach’s municipal area stretches over 14.82 km², some 10 km² of which is woodland, open land and farmland.

Egelsbach borders in the north and east on the town of Langen
Langen, Hesse
Langen is a town of roughly 36,000 in the Offenbach district in the Regierungsbezirk of Darmstadt in Hesse, Germany, between Darmstadt and Frankfurt am Main...
, in the south on the district-free city of Darmstadt
Darmstadt
Darmstadt is a city in the Bundesland of Hesse in Germany, located in the southern part of the Rhine Main Area.The sandy soils in the Darmstadt area, ill-suited for agriculture in times before industrial fertilisation, prevented any larger settlement from developing, until the city became the seat...
and the community of Erzhausen
Erzhausen
Erzhausen is a village in southern Hesse, Germany. It is part of the district of Darmstadt-Dieburg. It has about 7.000 inhabitants.- History :...
(Darmstadt-Dieburg
Darmstadt-Dieburg
Darmstadt-Dieburg is a Kreis in the south of Hesse, Germany. Neighboring districts are Offenbach, Aschaffenburg, Miltenberg, Odenwaldkreis, Bergstraße, Groß-Gerau, and the district-free city of Darmstadt, which it surrounds.-History:...
), and in the west on the town of Mörfelden-Walldorf
Mörfelden-Walldorf
Mörfelden-Walldorf is a town in the Groß-Gerau district, situated in the Frankfurt Rhein-Main Region in Hessen, Germany.- Location :Mörfelden-Walldorf is situated within a triangle formed by the South Hessian cities of Frankfurt am Main, Darmstadt and Wiesbaden, near Frankfurt International...
(Groß-Gerau district
Groß-Gerau (district)
Groß-Gerau is a Kreis in the south of Hesse , Germany. Neighboring districts are Main-Taunus, district-free Frankfurt, Darmstadt-Dieburg, Bergstraße, Alzey-Worms, Mainz-Bingen, and the district-free cities Mainz and Wiesbaden....
).

In 1275, Egelsbach had its first documentary mention. The village then belonged to the Lords of Falkenstein
Counts of Falkenstein (Rhineland-Palatinate)
The Grafen von Falkenstein was a dynasty of German nobility descending from the Ministeriales of Bolanden, who held land and a castle at Falkenstein in the Palatinate region....
, who likely inherited the place in 1255 from the Lords of Hagen-Münzenberg. After the Falkensteins’ male line died out in 1486, the Counts of Isenburg
Isenburg
Isenburg was a region of Germany located in southern present-day Hesse, located in territories north and south of Frankfurt. The states of Isenburg emerged from the Niederlahngau , which partitioned in 1137 into Isenburg-Isenburg and Isenburg-Limburg-Covern...
inherited Egelsbach.

In 1526, the Reformation
Protestant Reformation
The Protestant Reformation was a 16th-century split within Western Christianity initiated by Martin Luther, John Calvin and other early Protestants. The efforts of the self-described "reformers", who objected to the doctrines, rituals and ecclesiastical structure of the Roman Catholic Church, led...
was introduced into the village. In 1600, the Count of Isenburg sold the Amt of Kelsterbach
Kelsterbach
Kelsterbach is a town in Groß-Gerau district in Hessen, Germany. It lies on Frankfurt's southwestern outskirts at a bend on the left bank of the river Main, right where a small brook, called the Kelster empties into the river...
along with Egelsbach and Langen to the Landgraves of Hesse-Darmstadt
Landgraviate of Hesse-Darmstadt
The Landgraviate of Hesse-Darmstadt was a member state of the Holy Roman Empire. It was formed in 1567 following the division of the Landgraviate of Hesse between the four sons of Philip I, the last Landgrave of Hesse....
, whereupon Egelsbach became Hessian. In 1705 Egelsbach became a parish, after which it was split from the parish of Langen. With the partition of the Länger Mark (a communally owned cadastral area) in 1732, to which Egelsbach had belonged over the ages, Egelsbach got one third of the land. In 1821, the Amt of Kelsterbach was abolished and Egelsbach then belonged until 1832 to the Landratsbezirk of Langen. Since then, however, Egelsbach has been part of the Offenbach district. In 1873, the village got its own railway station on the Frankfurt am Main-Darmstadt
Darmstadt
Darmstadt is a city in the Bundesland of Hesse in Germany, located in the southern part of the Rhine Main Area.The sandy soils in the Darmstadt area, ill-suited for agriculture in times before industrial fertilisation, prevented any larger settlement from developing, until the city became the seat...
line, and in 1955 the airport was built.

In mid-March 2008, the population figure broke the 10,000 mark. Accounting for this is, above all, the expansion of the “Im Brühl” new development area.

The municipal election held on 26 March 2006 yielded the following results:
After community council chairwoman Claudia Berck left the CDU in late July 2008, the party has since then only had eight councillors, as Berck has been sitting as an independent.

The independent mayor Rudolf (“Rudi”) Moritz was reëlected on 26 March 2006 in the first vote
Two-round system
The two-round system is a voting system used to elect a single winner where the voter casts a single vote for their chosen candidate...
with 66.8% of the votes cast.

Pont-Saint-Esprit
Pont-Saint-Esprit
Pont-Saint-Esprit is a commune in the Gard département in southern France. It is situated on the Rhône River and is the site of a historical crossing, hence its name...
, Gard
Gard
Gard is a département located in southern France in the Languedoc-Roussillon region.The department is named after the River Gard, although the formerly Occitan name of the River Gard, Gardon, has been replacing the traditional French name in recent decades, even among French speakers.- History...
, France
France
The French Republic , The French Republic , The French Republic , (commonly known as France , is a unitary semi-presidential republic in Western Europe with several overseas territories and islands located on other continents and in the Indian, Pacific, and Atlantic oceans. Metropolitan France...
since 1991 Chojnów
Chojnów
Chojnów is a small town in Legnica County, Lower Silesian Voivodeship, in south-western Poland. It is located on the Skora river, a tributary of the Kaczawa at an average altitude of above sea level. Chojnów is the administrative seat of the rural gmina called Gmina Chojnów, although the town is...
, Legnica County
Legnica County
Legnica County is a unit of territorial administration and local government in Lower Silesian Voivodeship, south-western Poland. It came into being on January 1, 1999, as a result of the Polish local government reforms passed in 1998. The county covers an area of...
, Lower Silesia
Lower Silesian Voivodeship
Lower Silesian Voivodeship, or Lower Silesia Province , is one of the 16 voivodeships into which Poland is currently divided. It lies in southwestern Poland...
, Poland
Poland
Poland , officially the Republic of Poland , is a country in Central Europe bordered by Germany to the west; the Czech Republic and Slovakia to the south; Ukraine, Belarus and Lithuania to the east; and the Baltic Sea and Kaliningrad Oblast, a Russian exclave, to the north...
since 2005

There are some proponents of the view that an amalgamation of Egelsbach with Langen is “right at the doorstep”. This is quite simply untrue. Egelsbach’s budget – as with most public budgets – is running a deficit, but Egelsbach as always is moving towards fiscal fitness. The policymakers gave the concept of budget consolidation some thought early on, and then implemented and updated it. The budgets were approved throughout by the municipal supervisors.

Near the Baggersee (lake) at 50°0′13"N 8°36′39"E is an American
United States
The United States of America is a federal constitutional republic comprising fifty states and a federal district...
military transmission facility with various antenna setups.

The Ernst-Reuter-Schule (Hauptschule
Hauptschule
A Hauptschule is a secondary school in Germany and Austria, starting after 4 years of elementary schooling, which offers Lower Secondary Education according to the International Standard Classification of Education...
and Realschule
Realschule
The Realschule is a type of secondary school in Germany, Austria, Switzerland, and Liechtenstein. It has also existed in Croatia , Denmark , Sweden , Hungary and in the Russian Empire .-History:The Realschule was an outgrowth of the rationalism and empiricism of the seventeenth and...
) was dissolved at the end of the 2003/2004 school year and the remaining classes were merged into the Albert-Einstein-Schule in Langen.


The Egelsbach Swimming Pool Promotional Club (FVFE) is, with its more than 400 members, a charitable club whose goal, through active work and collecting donations, is to keep the outdoor swimming pool
Swimming pool
A swimming pool, swimming bath, wading pool, or simply a pool, is a container filled with water intended for swimming or water-based recreation. There are many standard sizes; the largest is the Olympic-size swimming pool...
on Freiherr-vom-Stein-Straße (Egelsbach) running for its users. In 2003, the pool’s threatened closure brought about a great stir among the local people. Thanks to some active citizens’ initiative, 4,000 signatures were gathered within a few weeks from those favouring maintaining the pool. From this came a meeting in July 2003, with the mayor’s involvement, of 50 citizens. A board was formed whose job was to prepare the founding of a promotional club for the maintenance of the swimming pool. On 2 September 2003, the Förderverein Freibad Egelsbach e.V. was founded.

The Egelsbach Kermis Association is a club that takes upon itself to cultivate the 400-year tradition of the Egelsbacher Kerb.