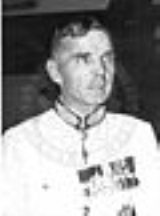 Encyclopedia
Sir Gerard Edward James Gent, KCMG
Order of St Michael and St George
The Most Distinguished Order of Saint Michael and Saint George is an order of chivalry founded on 28 April 1818 by George, Prince Regent, later George IV of the United Kingdom, while he was acting as Prince Regent for his father, George III....
, DSO
Distinguished Service Order
The Distinguished Service Order is a military decoration of the United Kingdom, and formerly of other parts of the British Commonwealth and Empire, awarded for meritorious or distinguished service by officers of the armed forces during wartime, typically in actual combat.Instituted on 6 September...
, OBE
Order of the British Empire
The Most Excellent Order of the British Empire is an order of chivalry established on 4 June 1917 by George V of the United Kingdom. The Order comprises five classes in civil and military divisions...
, MC
Military Cross
The Military Cross is the third-level military decoration awarded to officers and other ranks of the British Armed Forces; and formerly also to officers of other Commonwealth countries....
, was the first appointed Governor of the Malayan Union in 1946.

Sir Edward was born in 1895 was the son of John Gent (1844–1927) and Harriet Frankland Randall. His real name is Gerard Edward James Gent, but he changed it to Edward James Gent, the reasons for which were unknown. Gent was educated at The King's School, Canterbury
The King's School, Canterbury
The King's School is a British co-educational independent school for both day and boarding pupils in the historic English cathedral city of Canterbury in Kent. It is a member of the Headmasters' and Headmistresses' Conference and the Eton Group....
, and Trinity College, Oxford
Trinity College, Oxford
The College of the Holy and Undivided Trinity in the University of Oxford, of the foundation of Sir Thomas Pope , or Trinity College for short, is one of the constituent colleges of the University of Oxford in England. It stands on Broad Street, next door to Balliol College and Blackwells bookshop,...
.

Gent served with the Duke of Cornwall's Light Infantry
Duke of Cornwall's Light Infantry
The Duke of Cornwall's Light Infantry was an infantry regiment of the British Army from 1881 to 1959. Its lineage is continued today by The Rifles....
in the First World War in Flanders and Italy. He was wounded twice and was awarded the Military Cross
Military Cross
The Military Cross is the third-level military decoration awarded to officers and other ranks of the British Armed Forces; and formerly also to officers of other Commonwealth countries....
in 1917 and the Distinguished Service Order
Distinguished Service Order
The Distinguished Service Order is a military decoration of the United Kingdom, and formerly of other parts of the British Commonwealth and Empire, awarded for meritorious or distinguished service by officers of the armed forces during wartime, typically in actual combat.Instituted on 6 September...
in 1919.

He was the first appointed Governor of the Malayan Union, Sir Edward also became the first Colonial Administrator to discuss openly to form a better government for the future of Malaya, where later the Federation of Malaya
Federation of Malaya
The Federation of Malaya is the name given to a federation of 11 states that existed from 31 January 1948 until 16 September 1963. The Federation became independent on 31 August 1957...
was established. He was an instrumental figure in the formation of the Malayan Union
Malayan Union
The Malayan Union was a federation of the Malay states and the Straits Settlements of Penang and Malacca. It was the successor to British Malaya and was conceived to unify the Malay Peninsula under a single government so as to simplify administration. The Malayan Union later became the independent...
which was established on 1 April 1946 in Kuala Lumpur
Kuala Lumpur
Kuala Lumpur is the capital and the second largest city in Malaysia by population. The city proper, making up an area of , has a population of 1.4 million as of 2010. Greater Kuala Lumpur, also known as the Klang Valley, is an urban agglomeration of 7.2 million...
, and the first Governor of the Malayan Union. He remained in office until his death. When Malaysia achieved independence (Merdeka
Merdeka
Merdeka is a word in the Indonesian and Malay language meaning Independent or freedom. It is derived from the Sanskrit Maharddhika meaning "rich, prosperous and powerful". In the Malay archipelago, this term had acquired the meaning of a freed slave...
) from the United Kingdom, his widow Lady Gent, together with Lady Gurney, were invited to the ceremony as guests of honour.

Gent was returning to the United Kingdom in a Avro York
Avro York
The Avro York was a British transport aircraft that was derived from the Second World War Lancaster heavy bomber, and used in both military and airliner roles between 1943 and 1964.-Design and development:...
transport aircraft of the Royal Air Force
Royal Air Force
The Royal Air Force is the aerial warfare service branch of the British Armed Forces. Formed on 1 April 1918, it is the oldest independent air force in the world...
when it collided with a Douglas DC-6
Douglas DC-6
The Douglas DC-6 is a piston-powered airliner and transport aircraft built by the Douglas Aircraft Company from 1946 to 1958. Originally intended as a military transport near the end of World War II, it was reworked after the war to compete with the Lockheed Constellation in the long-range...
of Scandinavian Airlines System
Scandinavian Airlines System
Scandinavian Airlines or SAS, previously Scandinavian Airlines System, is the flag carrier of Denmark, Norway and Sweden, and the largest airline in Scandinavia....
near Northwood, north London.
|
|
The source of this article is wikipedia, the free encyclopedia.  The text of this article is licensed under the GFDL.