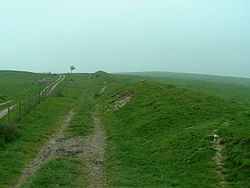 In archaeology
Archaeology
Archaeology, or archeology , is the study of human society, primarily through the recovery and analysis of the material culture and environmental data that they have left behind, which includes artifacts, architecture, biofacts and cultural landscapes...
, earthwork is a general term to describe artificial changes in land level. Earthworks are often known colloquially as 'lumps and bumps'. Earthworks can themselves be archaeological feature
Feature (archaeology)
Feature in archaeology and especially excavation has several different but allied meanings. A feature is a collection of one or more contexts representing some human non-portable activity that generally has a vertical characteristic to it in relation to site stratigraphy. Examples of features are...
s or they can show features beneath the surface. Earthworks of interest to archaeologists include hillforts, henge
Henge
There are three related types of Neolithic earthwork which are all sometimes loosely called henges. The essential characteristic of all three types is that they feature a ring bank and ditch but with the ditch inside the bank rather than outside...
s, mound
Mound
A mound is a general term for an artificial heaped pile of earth, gravel, sand, rocks, or debris. The most common use is in reference to natural earthen formation such as hills and mountains, particularly if they appear artificial. The term may also be applied to any rounded area of topographically...
s, platform mound
Platform mound
A platform mound is any earthwork or mound intended to support a structure or activity.-Eastern North America:The indigenous peoples of North America built substructure mounds for well over a thousand years starting in the Archaic period and continuing through the Woodland period...
s, effigy mound
Effigy mound
Sites in the U.S. of similar history may be found at Indian Mounds ParkAn effigy mound is a raised pile of earth built in the shape of a stylized animal, symbol, religious figure, or human figure. Effigy mounds were only built during the Late Woodland Period .Effigy mounds were constructed in many...
s, enclosures
Enclosure (archaeology)
In archaeology, an enclosure is one of the most common types of archaeological site. It is any area of land separated from surrounding land by earthworks, walls or fencing. Such a simple feature is found all over the world and during almost all archaeological periods...
, long barrow
Long barrow
A long barrow is a prehistoric monument dating to the early Neolithic period. They are rectangular or trapezoidal tumuli or earth mounds traditionally interpreted as collective tombs...
s, tumuli
Tumulus
A tumulus is a mound of earth and stones raised over a grave or graves. Tumuli are also known as barrows, burial mounds, Hügelgrab or kurgans, and can be found throughout much of the world. A tumulus composed largely or entirely of stones is usually referred to as a cairn...
, ridge and furrow
Ridge and furrow
Ridge and furrow is an archaeological pattern of ridges and troughs created by a system of ploughing used in Europe during the Middle Ages. The earliest examples date to the immediate post-Roman period and the system was used until the 17th century in some areas. Ridge and furrow topography is...
, mottes
Motte-and-bailey
A motte-and-bailey is a form of castle, with a wooden or stone keep situated on a raised earthwork called a motte, accompanied by an enclosed courtyard, or bailey, surrounded by a protective ditch and palisade...
, round barrow
Round barrow
Round barrows are one of the most common types of archaeological monuments. Although concentrated in Europe they are found in many parts of the world because of their simple construction and universal purpose....
s and other tomb
Tomb
A tomb is a repository for the remains of the dead. It is generally any structurally enclosed interment space or burial chamber, of varying sizes...
s. Earthworks from deserted medieval village
Deserted medieval village
In the United Kingdom, a deserted medieval village is a former settlement which was abandoned during the Middle Ages, typically leaving no trace apart from earthworks or cropmarks. If there are fewer than three inhabited houses the convention is to regard the site as deserted; if there are more...
s can be used to determine the location, size, and layout of lost settlements.

Earthworks can vary in height from a few centimetres to the size of Silbury Hill
Silbury Hill
Silbury Hill is a prehistoric artificial chalk mound near Avebury in the English county of Wiltshire. It is part of the Stonehenge, Avebury and Associated Sites UNESCO World Heritage Site, and lies at ....
at 40 metres (131.2 ft). They can date from the neolithic
Neolithic
The Neolithic Age, Era, or Period, or New Stone Age, was a period in the development of human technology, beginning about 9500 BC in some parts of the Middle East, and later in other parts of the world. It is traditionally considered as the last part of the Stone Age...
through to last week. They can stretch for many tens of kilometres, e.g. Offa's Dyke
Offa's Dyke
Offa's Dyke is a massive linear earthwork, roughly followed by some of the current border between England and Wales. In places, it is up to wide and high. In the 8th century it formed some kind of delineation between the Anglian kingdom of Mercia and the Welsh kingdom of Powys...
and Antonine Wall
Antonine Wall
The Antonine Wall is a stone and turf fortification built by the Romans across what is now the Central Belt of Scotland, between the Firth of Forth and the Firth of Clyde. Representing the northernmost frontier barrier of the Roman Empire, it spanned approximately 39 miles and was about ten feet ...
, In area they can cover many hectares - for example, Maiden Castle
Maiden Castle, Dorset
Maiden Castle is an Iron Age hill fort south west of Dorchester, in the English county of Dorset. Hill forts were fortified hill-top settlements constructed across Britain during the Iron Age...
, which is 19 hectares (46.9 acre).

Shallow earthworks are often more visible as cropmarks or in aerial photographs
Aerial photography
Aerial photography is the taking of photographs of the ground from an elevated position. The term usually refers to images in which the camera is not supported by a ground-based structure. Cameras may be hand held or mounted, and photographs may be taken by a photographer, triggered remotely or...
if taken when the sun is low in the sky and shadows are more pronounced. Similarly, earthworks may be more visible after a frost or a light dusting of snow. An accurate survey
Archaeological field survey
Archaeological field survey is the method by which archaeologists search for archaeological sites and collect information about the location, distribution and organization of past human cultures across a large area...
of the earthworks can enable them to be interpreted without the need for excavation.
The source of this article is wikipedia, the free encyclopedia.  The text of this article is licensed under the GFDL.