Encyclopedia
A long barrow is a prehistoric monument dating to the early Neolithic
Neolithic
The Neolithic Age, Era, or Period, or New Stone Age, was a period in the development of human technology, beginning about 9500 BC in some parts of the Middle East, and later in other parts of the world. It is traditionally considered as the last part of the Stone Age...
period. They are rectangular or trapezoid
Trapezoid
In Euclidean geometry, a convex quadrilateral with one pair of parallel sides is referred to as a trapezoid in American English and as a trapezium in English outside North America. A trapezoid with vertices ABCD is denoted...
al tumuli or earth mounds traditionally interpreted as collective tombs. Long barrows are also typical for several Celtic, Slavic, and Baltic cultures of Northern Europe of the 1st millennium AD. 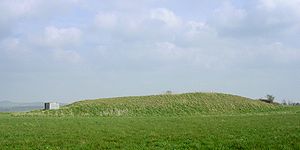 Long barrows in the United Kingdom

Around 300 are known from Scotland and England with a concentration of the monuments in southern and eastern England
England
England is a country that is part of the United Kingdom. It shares land borders with Scotland to the north and Wales to the west; the Irish Sea is to the north west, the Celtic Sea to the south west, with the North Sea to the east and the English Channel to the south separating it from continental...
. Elsewhere in the British Isles
British Isles
The British Isles are a group of islands off the northwest coast of continental Europe that include the islands of Great Britain and Ireland and over six thousand smaller isles. There are two sovereign states located on the islands: the United Kingdom of Great Britain and Northern Ireland and...
Neolithic people buried their dead in Megalithic tombs.

Archaeological excavation indicated that the construction of the earth barrow was the last phase in a complex sequence connected with the ritual
Ritual
A ritual is a set of actions, performed mainly for their symbolic value. It may be prescribed by a religion or by the traditions of a community. The term usually excludes actions which are arbitrarily chosen by the performers....
inhumation of the dead that took place in British society between around 4000 and 2400 BC. Many long barrow sites started off as small rectangular enclosures of earth banks topped by a timber palisade
Palisade
A palisade is a steel or wooden fence or wall of variable height, usually used as a defensive structure.- Typical construction :Typical construction consisted of small or mid sized tree trunks aligned vertically, with no spacing in between. The trunks were sharpened or pointed at the top, and were...
, constituting a mortuary enclosure
Mortuary enclosure
A mortuary enclosure is a term given in archaeology and anthropology to an area, surrounded by a wood, stone or earthwork barrier, in which dead bodies are placed for excarnation and to await secondary and/or collective burial...
. Within this was built a wooden room-sized mortuary chamber with large supporting posts. Sometimes a grand timber entrance was also built along with an avenue
Avenue (archaeology)
British Archaeologists refine the general archaeological use of avenue to denote a long, parallel-sided strip of land, measuring up to about 30m in width, open at either end and with edges marked by stone or timber alignments and/or a low earth bank and ditch...
of wooden posts. Human remains were placed in this chamber, sometimes all at once and sometimes over a period of time. Often the bones found in them are disarticulated, implying that the bodies were subjected to exposure and excarnation
Excarnation
In archaeology and anthropology, the term, excarnation , refers to the burial practice of removing the flesh and organs of the dead, leaving only the bones....
prior to burial or that they were buried elsewhere and exhumed for the purposes of placing in the barrow. Rarely are whole skeletons found and it seems that only long bones and skulls survived until the final interment.

Up to fifty separate individuals were placed in each enclosure, males, females and children. There is only limited evidence for grave goods
Grave goods
Grave goods, in archaeology and anthropology, are the items buried along with the body.They are usually personal possessions, supplies to smooth the deceased's journey into the afterlife or offerings to the gods. Grave goods are a type of votive deposit...
in these collective interments despite the belief that such individuals enjoyed high-status. The chambers were then surrounded and covered by large stone cairn
Cairn
Cairn is a term used mainly in the English-speaking world for a man-made pile of stones. It comes from the or . Cairns are found all over the world in uplands, on moorland, on mountaintops, near waterways and on sea cliffs, and also in barren desert and tundra areas...
s or were set alight in the case of examples in Yorkshire
Yorkshire
Yorkshire is a historic county of northern England and the largest in the United Kingdom. Because of its great size in comparison to other English counties, functions have been increasingly undertaken over time by its subdivisions, which have also been subject to periodic reform...
. Only after these procedures was the earth barrow constructed over the top of the dead. The barrow was often far larger than the original mortuary enclosure and used material excavated from ditches dug along the long sides of the enclosure. Some barrows when excavated produced evidence of the mounds being partitioned by wattle fences which served no apparent structural purpose. 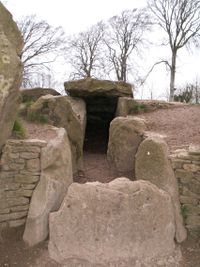 In many cases, weathering and ploughing during the intervening centuries along with early archaeological excavations and looting have left only the stone parts of the chambered monuments extant whilst some earth and timber long barrows may only survive beneath the surface. Others however are still visible in the countryside as barrows between 15 and 125m long and surviving to heights of 4-5m.

50% of the long barrows in Gloucestershire
Gloucestershire
Gloucestershire is a county in South West England. The county comprises part of the Cotswold Hills, part of the flat fertile valley of the River Severn, and the entire Forest of Dean....
, 66% in Hampshire
Hampshire
Hampshire is a county on the southern coast of England in the United Kingdom. The county town of Hampshire is Winchester, a historic cathedral city that was once the capital of England. Hampshire is notable for housing the original birthplaces of the Royal Navy, British Army, and Royal Air Force...
, 80% in Lincolnshire
Lincolnshire
Lincolnshire is a county in the east of England. It borders Norfolk to the south east, Cambridgeshire to the south, Rutland to the south west, Leicestershire and Nottinghamshire to the west, South Yorkshire to the north west, and the East Riding of Yorkshire to the north. It also borders...
and almost all the burial mounds in Essex
Essex
Essex is a ceremonial and non-metropolitan county in the East region of England, and one of the home counties. It is located to the northeast of Greater London. It borders with Cambridgeshire and Suffolk to the north, Hertfordshire to the west, Kent to the South and London to the south west...
have been damaged. According to English Heritage
English Heritage
English Heritage . is an executive non-departmental public body of the British Government sponsored by the Department for Culture, Media and Sport...
modern tillage techniques have done as much damage in the last 6 decades as traditional tilling did in 6 centuries.

It has been conjectured that long barrows are derived from the timber long houses built by the continental Neolithic European Linearbandkeramic culture which was contemporary with the British Mesolithic
Mesolithic
The Mesolithic is an archaeological concept used to refer to certain groups of archaeological cultures defined as falling between the Paleolithic and the Neolithic....
. Archaeologists including Ian Hodder
Ian Hodder
Ian Hodder FBA is a British archaeologist and pioneer of postprocessualist theory in archaeology that first took root among his students and in his own work between 1980-1990...
have noted similarities between the two forms although a significant number of long mounds in southern England have been demonstrated more recently to have limited primary evidence of burial at all. Traditionally, these structures have been interpreted as 'houses' for the dead and that barrow builders may have continued this old idea in the Neolithic and later periods. In those long barrows that do contain appreciable quantities of human remains, their concentration in just one small part of the overall structure has led some to argue that the long barrow was not merely a repository for the dead but also a general monument
Monument
A monument is a type of structure either explicitly created to commemorate a person or important event or which has become important to a social group as a part of their remembrance of historic times or cultural heritage, or simply as an example of historic architecture...
acting as a territorial marker, a place of religious offering and a community centre. Some appear to have been built over pre-existing occupation sites which may support this interpretation. Chambered long barrows however do appear to have been primarily intended as burial sites. 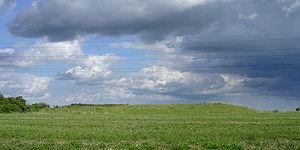 Examples of long barrows include:

See List of long barrows in the United Kingdom

Birger Nerman
Birger Nerman
Birger Nerman was a Swedish archaeologist, professor, and author.-Background:Birger Nerman belonged to a bourgeois family Nerman from Vimmerby. He was the son of Janne Nerman , the bookseller in Norrköping, and his wife Anna Ida Nordberg...
excavated numerous long barrows of the Krivichs in the vicinity of Izborsk
Izborsk
Izborsk is a rural locality in Pechorsky District of Pskov Oblast, Russia. It contains one of the most ancient and impressive fortresses of Western Russia....
.