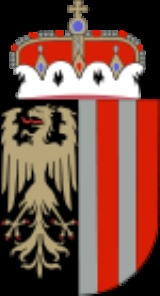 Encyclopedia
The Duchy of Salzburg was a Cisleithania
Cisleithania
Cisleithania was a name of the Austrian part of Austria-Hungary, the Dual Monarchy created in 1867 and dissolved in 1918. The name was used by politicians and bureaucrats, but it had no official status...
n Kronland
Kronland
Kronland may refer to:* the German name of Lanškroun, a town in the Czech Republic* a "crown land", a constituent territory of Cisleithania, the Austrian half of former Austria–Hungary...
of the Austrian Empire
Austrian Empire
The Austrian Empire was a modern era successor empire, which was centered on what is today's Austria and which officially lasted from 1804 to 1867. It was followed by the Empire of Austria-Hungary, whose proclamation was a diplomatic move that elevated Hungary's status within the Austrian Empire...
and Austria-Hungary
Austria-Hungary
Austria-Hungary , more formally known as the Kingdoms and Lands Represented in the Imperial Council and the Lands of the Holy Hungarian Crown of Saint Stephen, was a constitutional monarchic union between the crowns of the Austrian Empire and the Kingdom of Hungary in...
from 1849–1918. Its capital was Salzburg
Salzburg
-Population development:In 1935, the population significantly increased when Salzburg absorbed adjacent municipalities. After World War II, numerous refugees found a new home in the city. New residential space was created for American soldiers of the postwar Occupation, and could be used for...
, while other towns in the duchy included Zell am See
Zell am See
Zell am See is the capital city of the Zell am See district in the Austrian state of Salzburg. The city has about 10,000 inhabitants.Zell am See is a tourist destination and a transportation hub for the region...
and Gastein.

The Archbishopric of Salzburg
Archbishopric of Salzburg
The Archbishopric of Salzburg was an ecclesiastical State of the Holy Roman Empire, its territory roughly congruent with the present-day Austrian state of Salzburg....
was secularized in 1803 as the Electorate of Salzburg
Electorate of Salzburg
The Electorate of Salzburg , occasionally known as the Grand Duchy of Salzburg, was an electoral principality of the Holy Roman Empire from 1803–05. Its capital was Salzburg.- History :...
, but the short-lived principality was annexed by the Austrian Empire
Austrian Empire
The Austrian Empire was a modern era successor empire, which was centered on what is today's Austria and which officially lasted from 1804 to 1867. It was followed by the Empire of Austria-Hungary, whose proclamation was a diplomatic move that elevated Hungary's status within the Austrian Empire...
in 1805. After the Napoleonic Wars
Napoleonic Wars
The Napoleonic Wars were a series of wars declared against Napoleon's French Empire by opposing coalitions that ran from 1803 to 1815. As a continuation of the wars sparked by the French Revolution of 1789, they revolutionised European armies and played out on an unprecedented scale, mainly due to...
, the Salzburg territory was administered from Linz
Linz
Linz is the third-largest city of Austria and capital of the state of Upper Austria . It is located in the north centre of Austria, approximately south of the Czech border, on both sides of the river Danube. The population of the city is , and that of the Greater Linz conurbation is about...
as the department of Salzach
Salzach
The Salzach is a river in Austria and Germany. It is a right tributary of the Inn and is 225 kilometres in length.The river's name is derived from the German word Salz, meaning "salt". Until the 19th century shipping of salt down the river was an important part of the local economy...
within the Archduchy of Upper Austria.

After the Revolutions of 1848 in the Habsburg areas
Revolutions of 1848 in the Habsburg areas
From March 1848 through July 1849, the Habsburg Austrian Empire was threatened by revolutionary movements. Much of the revolutionary activity was of a nationalist character: the empire, ruled from Vienna, included Austrian Germans, Hungarians, Slovenes, Poles, Czechs, Slovaks, Ruthenians,...
, the Salzburg territory was separated from Upper Austria and became a new Kronland, the Duchy of Salzburg, in 1849. It became part of Austria-Hungary in 1867.

With the fall of the kaiserlich und königlich House of Habsburg in 1918, the duchy was succeeded by the state of Salzburg
Salzburg (state)
Salzburg is a state or Land of Austria with an area of 7,156 km2, located adjacent to the German border. It is also known as Salzburgerland, to distinguish it from its capital city, also named Salzburg...
, part of first German Austria
German Austria
Republic of German Austria was created following World War I as the initial rump state for areas with a predominantly German-speaking population within what had been the Austro-Hungarian Empire, without the Kingdom of Hungary, which in 1918 had become the Hungarian Democratic Republic.German...
and then the First Austrian Republic
First Austrian Republic
The Republic of Austria encompasses the period of Austrian history following the signing of the Treaty of Saint-Germain-en-Laye of September 1919, the settlement after the end of World War I which put an end to the Republic of German Austria, continuing up to World War II...
.
The source of this article is wikipedia, the free encyclopedia.  The text of this article is licensed under the GFDL.