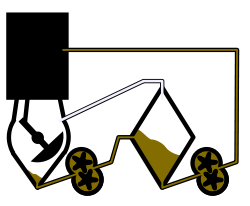 Four-stroke engines are both lubricated and cooled by oil which is circulated throughout the engine feeding the various bearing
Bearing (mechanical)
A bearing is a device to allow constrained relative motion between two or more parts, typically rotation or linear movement. Bearings may be classified broadly according to the motions they allow and according to their principle of operation as well as by the directions of applied loads they can...
s and other moving parts of the engine; and thereafter allowed to drain to the sump at the base of the engine under gravity. In most production automobile
Automobile
An automobile, autocar, motor car or car is a wheeled motor vehicle used for transporting passengers, which also carries its own engine or motor...
s, which use a wet sump system, this oil is simply collected in a 3 litre capacity pan at the base of the engine, known as the oil sump
Sump
A sump is a low space that collects any often-undesirable liquids such as water or chemicals. A sump can also be an infiltration basin used to manage surface runoff water and recharge underground aquifers....
(or oil pan in American English), where it is circulated back through the engine by an oil pump
Oil pump (internal combustion engine)
The oil pump in an internal combustion engine circulates engine oil under pressure to the rotating bearings, the sliding pistons and the camshaft of the engine...
drawing, or "scavenging" from the sump's reservoir. This pump is mounted internally to the engine and is typically driven by the camshaft. In a dry sump, the oil still falls to the base of the engine, but rather than being allowed to collect in a reservoir style oil sump it falls into a much shallower sump where it is removed by one or more externally mounted scavenge pumps and is pumped into an external reservoir where it is both cooled and deaerated
Deaeration
Deaeration is the removal of air molecules from another gas or liquid. It can refer to:*Use of a deaerator.*Degasification, the removal of dissolved gases, such as oxygen, from liquids....
. These pumps are typically belt-driven from the front or back of the crankshaft
Crankshaft
The crankshaft, sometimes casually abbreviated to crank, is the part of an engine which translates reciprocating linear piston motion into rotation...
. Oil is then drawn from this reservoir by the pressure pump and circulated through the engine. Typical dry sump systems have the pressure pump and scavenge pumps mounted on a common shaft so that one pulley at the front of the system can run as many pumps as required by the design of the engine. It is common practice to have one scavenge pump per crankcase section and in the case of a V-type engine an additional scavenge pump to remove oil being fed to the valve gear. Therefore, a V-8 engine would have five scavenge pumps and a pressure pump in the pump "stack".

A dry sump offers many advantages, the most obvious of which are increased oil capacity afforded by the remote reservoir and the capability to mount the engine lower in the car because of the thinner profile of the sump thereby lowering the overall center of gravity
Center of gravity
In physics, a center of gravity of a material body is a point that may be used for a summary description of gravitational interactions. In a uniform gravitational field, the center of mass serves as the center of gravity...
. The external reservoir can also be relocated to another part of the car to improve weight distribution
Weight distribution
Weight distribution is the apportioning of weight within a vehicle, especially cars, airplanes, and trains.In a vehicle which relies on gravity in some way, weight distribution directly affects a variety of vehicle characteristics, including handling, acceleration, traction, and component life...
. Increased oil capacity by using a larger external reservoir than would be practical in a wet sump system allows the oil to cool and release entrained gasses from ring
Piston ring
A piston ring is a split ring that fits into a groove on the outer diameter of a piston in a reciprocating engine such as an internal combustion engine or steam engine.The three main functions of piston rings in reciprocating engines are:...
blow by and the action of the crankshaft. Furthermore, dry sump designs are not susceptible to the oil movement problems that wet sump systems can suffer from due to high cornering forces. If the oil in a wet sump is forced to one side in the oil pan the oil pump pickup tube can be temporarily uncovered leading to a loss of oil pressure. Because the scavenge pumps are typically mounted at the lowest point on the engine the oil flows into the pump suction by gravity rather than having to be lifted up into the suction of the pump like a wet sump does. Also the scavenge pumps can be of a different design that is more tolerant of entrained gasses than the typical pressure pump which can lose suction if too much air is mixed into the oil. Since the pressure pump is typically lower than the external oil tank it always has a positive pressure on its suction regardless of cornering forces. Another phenomenon that occurs in high-performance car engines is oil frothing up inside the crank-case due to the very high revs agitating the oil. Lastly, having the pumps external to the engine allows them to be maintained or replaced more easily.

Dry sumps are common on larger diesel engine
Diesel engine
A diesel engine is an internal combustion engine that uses the heat of compression to initiate ignition to burn the fuel, which is injected into the combustion chamber...
s such as those used for ship propulsion. Many racing
Auto racing
Auto racing is a motorsport involving the racing of cars for competition. It is one of the world's most watched televised sports.-The beginning of racing:...
cars, high performance
High performance vehicle
A high-performance vehicle is a vehicle that has been designed with specific performance capabilities, above and beyond those of normal vehicles. Enhancements such as higher engine output , enhanced braking and suspension systems, are all hallmarks of high-performance vehicles...
sports cars, and aerobatic aircraft also utilize dry-sump equipped engines because they prevent oil-starvation at high g
G-force
The g-force associated with an object is its acceleration relative to free-fall. This acceleration experienced by an object is due to the vector sum of non-gravitational forces acting on an object free to move. The accelerations that are not produced by gravity are termed proper accelerations, and...
loads, and because their lower center of gravity positively affects performance.

From a strictly engineering perspective, the dry sump is a superior solution, however with real-life economic considerations, where cars have to be built inexpensively, the wet sump is preferred. Dry sump systems add cost and complexity and the extra pumps and lines require more oil, so maintenance costs rise accordingly. Also, the performance-enhancing features of dry sump lubrication can have negative implications in a car's day-to-day driveability. A good example is the classic Mercedes-Benz 300SL
Mercedes-Benz 300SL
The Mercedes-Benz 300SL was introduced in 1954 as a two-seat, closed sports car with distinctive gull-wing doors. Later it was offered as an open roadster...
, a car that was designed for racing but sold to the general public and used on-road. The car had great oil capacity in a dry sump system to cope with continuous high-speed running while racing. However, in general use, owners found that the oil never achieved the correct operating temperature because the system was so efficient at cooling the oil. A makeshift solution was devised to deliberately block the oil cooler airflow to boost the oil temperature.

The advantages (above) of a dry sump lubrication are particularly beneficial to motorcycles, which tend to be ridden (driven) more vigorously than other road vehicles. The classic British parallel twin motorcycles such as BSA, Triumph and Norton all used dry sump lubrication. Traditionally, the oil tank was a remote item, but some late-model BSAs and the Meriden Triumphs used "oil-in-the-frame" designs. Although the ground-breaking Honda CB750
Honda CB750
The Honda CB750 is a motorcycle built in several model series between 1969 and 2003 and 2007 that is recognized as a milestone for Honda's successful introduction of a transverse, overhead camshaft inline four-cylinder engine that has ever since been the dominant sport bike configuration...
of 1969 had a dry-sump motor, modern motorcycles tend to use a wet-sump design. This is understandable with across-the-frame inline four-cylinder engines, since these wide motors need to be mounted fairly high in the frame (for ground clearance), so the space beneath the engine may as well be used for a wet sump. But narrower engines can be mounted lower and ideally should use dry sump lubrication.

It is notable that the Yamaha TRX850 270-degree parallel twin motorcycle has a dry sump engine. The TRX has an unusual feature in that the oil tank is not remote, but is integral to the engine, sitting atop the gearbox. This design eradicates external oil lines, allowing simpler engine removal and providing faster oil warm up.

The Rotax
Rotax
BRP-Powertrain GmbH & Co KG , commonly known simply as Rotax, is an Austrian engine manufacturer. It develops and produces four-stroke and advanced two-stroke engines for Bombardier Recreational Products products as well as for motorcycles, karts,...
engined Aprilia RSV Mille
Aprilia RSV Mille
The Aprilia RSV Mille was a sport motorcycle manufactured by Aprilia from 1998 to 2003. It was offered in three versions, RSV Mille, RSV Mille R, and RSV Mille SP....
utilises a dry sump.
The source of this article is wikipedia, the free encyclopedia.  The text of this article is licensed under the GFDL.