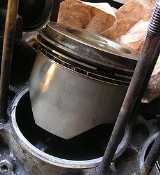 The three main functions of piston rings in reciprocating engines are:

Plz will anyone tell me that, what is the radial pressure acting on piston ring in case of compressor? Is there any formula for calculating it if i k...
More
x