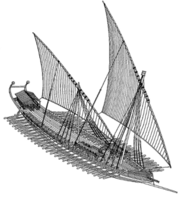 The dromon was a type of galley and the most important warship
Warship
A warship is a ship that is built and primarily intended for combat. Warships are usually built in a completely different way from merchant ships. As well as being armed, warships are designed to withstand damage and are usually faster and more maneuvrable than merchant ships...
of the Byzantine navy
Byzantine navy
The Byzantine navy was the naval force of the East Roman or Byzantine Empire. Like the empire it served, it was a direct continuation from its imperial Roman predecessor, but played a far greater role in the defense and survival of the state then its earlier iterations...
from the 6th to 12th centuries AD. It was indirectly developed from the ancient trireme
Trireme
A trireme was a type of galley, a Hellenistic-era warship that was used by the ancient maritime civilizations of the Mediterranean, especially the Phoenicians, ancient Greeks and Romans.The trireme derives its name from its three rows of oars on each side, manned with one man per oar...
and was usually propelled by both oar
Oar
An oar is an implement used for water-borne propulsion. Oars have a flat blade at one end. Oarsmen grasp the oar at the other end. The difference between oars and paddles are that paddles are held by the paddler, and are not connected with the vessel. Oars generally are connected to the vessel by...
s and sail
Sail
A sail is any type of surface intended to move a vessel, vehicle or rotor by being placed in a wind—in essence a propulsion wing. Sails are used in sailing.-History of sails:...
s, a configuration that had been used by navies in the Mediterranean Sea
Mediterranean Sea
The Mediterranean Sea is a sea connected to the Atlantic Ocean surrounded by the Mediterranean region and almost completely enclosed by land: on the north by Anatolia and Europe, on the south by North Africa, and on the east by the Levant...
for centuries.

Literary sources and accounts reveal that there were at least three varieties of dromon, while the exact relation of the dromon proper with the chelandion
Chelandion
Chelandion was a Byzantine galley warship, a variant of the dromōn that also functioned as a cargo transport.Its name derives from the Greek word kelēs, "courser", and first appeared during the early 8th century...
, a term with which it is often used interchangeably, somewhat unclear. These were, firstly the ousiakon which took its name from one company or ousia
Ousia
Ousia is the Ancient Greek noun formed on the feminine present participle of ; it is analogous to the English participle being, and the modern philosophy adjectival ontic...
of 100 men. This was a two-banked galley with the lower rank rowing only, and the upper rank rowing or disengaging to fight when required. Secondly the slightly larger pamphylos with a crew of between 120 and 160. Thirdly the dromon proper, which had a crew of 200: 50 on the lower bank, and 100 on the upper bank in two files, together with 50 marines.

The dromons had a central tower (xylokastron – Greek: "wooden castle") near the main mast
Mast (sailing)
The mast of a sailing vessel is a tall, vertical, or near vertical, spar, or arrangement of spars, which supports the sails. Large ships have several masts, with the size and configuration depending on the style of ship...
, from which the marines could use their bows
Bow (weapon)
The bow and arrow is a projectile weapon system that predates recorded history and is common to most cultures.-Description:A bow is a flexible arc that shoots aerodynamic projectiles by means of elastic energy. Essentially, the bow is a form of spring powered by a string or cord...
and arrow
Arrow
An arrow is a shafted projectile that is shot with a bow. It predates recorded history and is common to most cultures.An arrow usually consists of a shaft with an arrowhead attached to the front end, with fletchings and a nock at the other.- History:...
s or throw spear
Spear
A spear is a pole weapon consisting of a shaft, usually of wood, with a pointed head.The head may be simply the sharpened end of the shaft itself, as is the case with bamboo spears, or it may be made of a more durable material fastened to the shaft, such as flint, obsidian, iron, steel or...
s and other projectiles. Dromons were frequently equipped with flamethrower
Flamethrower
A flamethrower is a mechanical device designed to project a long controllable stream of fire.Some flamethrowers project a stream of ignited flammable liquid; some project a long gas flame. Most military flamethrowers use liquids, but commercial flamethrowers tend to use high-pressure propane and...
s (siphones, and as such the ships were described as siphōnophoroi dromones) that discharged Greek fire
Greek fire
Greek fire was an incendiary weapon used by the Byzantine Empire. The Byzantines typically used it in naval battles to great effect as it could continue burning while floating on water....
and catapult
Catapult
A catapult is a device used to throw or hurl a projectile a great distance without the aid of explosive devices—particularly various types of ancient and medieval siege engines. Although the catapult has been used since ancient times, it has proven to be one of the most effective mechanisms during...
s capable of hurling 10 kg projectiles up to 250 meters.

Middle English
Middle English
Middle English is the stage in the history of the English language during the High and Late Middle Ages, or roughly during the four centuries between the late 11th and the late 15th century....
dromond and Old French
Old French
Old French was the Romance dialect continuum spoken in territories that span roughly the northern half of modern France and parts of modern Belgium and Switzerland from the 9th century to the 14th century...
dromont are derived from the dromon, and described any particularly large medieval ship.