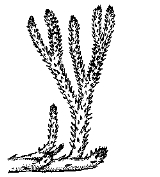 Encyclopedia
Drepanophycus is a genus of extinct plants of the Division Lycopodiophyta
Lycopodiophyta
The Division Lycopodiophyta is a tracheophyte subdivision of the Kingdom Plantae. It is the oldest extant vascular plant division at around 410 million years old, and includes some of the most "primitive" extant species...
of Early to Late Devonian
Devonian
The Devonian is a geologic period and system of the Paleozoic Era spanning from the end of the Silurian Period, about 416.0 ± 2.8 Mya , to the beginning of the Carboniferous Period, about 359.2 ± 2.5 Mya...
age (around ), found in Eastern Canada and Northeast USA, China, Russia, Egypt and various parts of Northern Europe and Britain.

Extinct terrestrial vascular plant
Vascular plant
Vascular plants are those plants that have lignified tissues for conducting water, minerals, and photosynthetic products through the plant. Vascular plants include the clubmosses, Equisetum, ferns, gymnosperms and angiosperms...
s of the Devonian period. Stem of the order of several mm to several cm in diameter and several cm to a metre long, erect or arched, dichotomizing occasionally, furnished with true roots at the base. Vascular bundle actinostele
Stele
A stele , also stela , is a stone or wooden slab, generally taller than it is wide, erected for funerals or commemorative purposes, most usually decorated with the names and titles of the deceased or living — inscribed, carved in relief , or painted onto the slab...
, tracheid
Tracheid
Tracheids are elongated cells in the xylem of vascular plants that serve in the transport of water and mineral salts. Tracheids are one of two types of tracheary elements, vessel elements being the other. All tracheary elements develop a thick lignified cell wall, and at maturity the protoplast...
s of primitive annular or helical type (so-called G-type). Leaves are unbranched thorn-shaped (i.e. with a wide base, tapering to a blunt point) microphyll
Microphyll
The terminology of fossil plants is in places a little confusing. In the discipline's 200+ year history, certain concepts have become entrenched, even though improved understanding has threatened the foundations upon which they are based...
s several mm long with a single prominent vascular thread, arranged spirally to randomly on the stem. Sporangia
Sporangium
A sporangium is an enclosure in which spores are formed. It can be composed of a single cell or can be multicellular. All plants, fungi, and many other lineages form sporangia at some point in their life cycle...
borne singly on the upper leaf surface.

Drepanophycus spinaeformis was first discovered in Scotland
Scotland
Scotland is a country that is part of the United Kingdom. Occupying the northern third of the island of Great Britain, it shares a border with England to the south and is bounded by the North Sea to the east, the Atlantic Ocean to the north and west, and the North Channel and Irish Sea to the...
; fossils have since been recovered in Russia
Russia
Russia or , officially known as both Russia and the Russian Federation , is a country in northern Eurasia. It is a federal semi-presidential republic, comprising 83 federal subjects...
(around Lake Shunet
Lake Shunet
Lake Shunet is a meromictic lake near Shira in the Republic of Khakassia, Russia....
in the republic of Khakassia
Khakassia
The Republic of Khakassia or Khakasiya is a federal subject of Russia located in south-central Siberia. Its capital city is Abakan, which is also the largest city in the republic...
), in the Yunnan
Yunnan
Yunnan is a province of the People's Republic of China, located in the far southwest of the country spanning approximately and with a population of 45.7 million . The capital of the province is Kunming. The province borders Burma, Laos, and Vietnam.Yunnan is situated in a mountainous area, with...
province of the People's Republic of China
People's Republic of China
China , officially the People's Republic of China , is the most populous country in the world, with over 1.3 billion citizens. Located in East Asia, the country covers approximately 9.6 million square kilometres...
, and in Egypt
Egypt
Egypt , officially the Arab Republic of Egypt, Arabic: , is a country mainly in North Africa, with the Sinai Peninsula forming a land bridge in Southwest Asia. Egypt is thus a transcontinental country, and a major power in Africa, the Mediterranean Basin, the Middle East and the Muslim world...
. They were among the earliest land plants, growing to approximately 80 cm in height. The species is notably differentiated from other plants in the genus
Genus
In biology, a genus is a low-level taxonomic rank used in the biological classification of living and fossil organisms, which is an example of definition by genus and differentia...
by its thicker stems. Foliage is described as firm and spiny, though recovered fossils rarely retain leaf detail. The stomata of D. spinaeformis look similar to that of Lycopodium
Lycopodium
Lycopodium is a genus of clubmosses, also known as ground pines or creeping cedar, in the family Lycopodiaceae, a family of fern-allies...
japonicum. They both consist of two large guard cells and pore, and are anomocytic. There were two small guard cells surrounded by two large similarly shaped subsidiary cells (paracytic) deriving from a pronounced elliptical cuticular ledge on the surface of the guard cells surrounding a thickened circumporal area.
The source of this article is wikipedia, the free encyclopedia.  The text of this article is licensed under the GFDL.