The California Planning & Development Report in 2007 ranked San Bernardino's downtown first on its list of the "Most Disappointing Mid-Sized City Downtowns in California," largely due to perceptions of poor public safety
Public Safety
Public safety involves the prevention of and protection from events that could endanger the safety of the general public from significant danger, injury/harm, or damage, such as crimes or disasters .-See also:* By nation...
, a moribund mall and various failed redevelopment initiatives. The San Bernardino County Sun
San Bernardino County Sun
The San Bernardino Sun is a newspaper in San Bernardino County, along with a heavy penetration into neighboring Riverside County. The SB Sun serves most of the Inland Empire in Southern California...
's own reporters have referred to the area as a "urban nightmare," due to the high crime and urban decay
Urban decay
Urban decay is the process whereby a previously functioning city, or part of a city, falls into disrepair and decrepitude...
surrounding it.

Currently, the San Bernardino City Council is considering another redevelopment effort. The city’s Economic Development Agency presented the council with a draft of the Downtown Core Vision / Action Plan in 2009. – a guide for revitalizing downtown San Bernardino for the next 10 years. The plan is the culmination of a year of research, community participation, and planning led by the city’s EDA and the urban planning firm EDAW. The city is discussing the construction of a new government center/civic plaza that will contain an iconic 24 story tower. The county of San Bernardino is also considering a new 12 story court house, hoping to help the old 1926 congested court house and the downtown skyline.

Seccombe Lake is known as "The Duck Park" or "El Parque De Los Patos". It is a haven for homeless transients. It is located at the corner of 5th Street and Sierra Way.

Meadowbrook Park is the main downtown park and is home to much activity. The park is located at the corner of 3rd Street and Sierra Way

Court Street Square is a square in the downtown area used for the Main Street's events. Downtown San Bernardino is home to many festivals throughout the year including the annual Route 66 Rendezvous, in honor of mother road U.S. Route 66
U.S. Route 66
U.S. Route 66 was a highway within the U.S. Highway System. One of the original U.S. highways, Route 66 was established on November 11, 1926 -- with road signs erected the following year...
. Approximately 500,000 classic cars come from around the world for this event which takes place on the third weekend in September for four days and three nights of a classic car parade. Court Street Square is at the corner of Court Street and "E" Street.

The city is planning an new district along Fourth Street. The key aspect of the plan is to make the area around the California Theatre and former CinemaStar site on Fourth Street as an area for entertainment and dining. Dining is all that is needed to make this into a reality, as well as the opening of Regal Stadium 14, which is expected to open in the spring of 2012.

Downtown San Bernardino had a large, luxurious, two story theater until it closed in September 2008. Maya Cinemas was expected to open at the old site of the CinemaStar on February 27, 2009, and although it has so far failed to do so, they still have plans for a downtown San Bernardino theater. Regal Entertainment Group
Regal Entertainment Group
Regal Entertainment Group also known as REG is a movie theater chain headquartered in Knoxville, Tennessee. Regal operates the largest and most geographically diverse theater circuit in the United States, consisting of 6,775 screens in 548 locations in 39 states and the District of Columbia as of...
and will now take over and rehabilitate the theater, will open in Spring 2012.

City Hall is a six story, glass-sheathed building designed in 1963 by César Pelli
César Pelli
César Pelli is an Argentine architect known for designing some of the world's tallest buildings and other major urban landmarks. In 1991, the American Institute of Architects listed Pelli among the ten most influential living American architects...
to reflect the urban environment around it. It is not sure what will happen to the current city hall when the new one begins construction and opens, part of the downtown revitalization project.

In response to the closures, the mall's owners developed a mixed-use concept to fill vacated retail outlets with offices. LNR Property Corp purchased the property in February 2006 with the intention of developing a high density residential and commercial project. In January 2008, after facing deadlock with the city, LNR Corp sold the Carousel Mall to M & D Properties for $23.5 million. 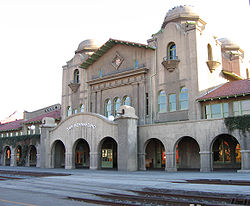