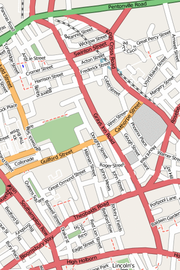 Doughty Street is a broad tree lined street in the Holborn
Holborn
Holborn is an area of Central London. Holborn is also the name of the area's principal east-west street, running as High Holborn from St Giles's High Street to Gray's Inn Road and then on to Holborn Viaduct...
district of the London Borough of Camden
London Borough of Camden
In 1801, the civil parishes that form the modern borough were already developed and had a total population of 96,795. This continued to rise swiftly throughout the 19th century, as the district became built up; reaching 270,197 in the middle of the century...
. The southern part is a continuation of the short John Street, which comes off Theobalds Road. The northern part crosses Guilford Street
Guilford Street
Guilford Street is a road in Bloomsbury in central London, England. From Russell Square it extends east-northeast to Gray's Inn Road. Note that it is not spelt the same way as Guildford in Surrey.It has an entrance to Coram's Fields....
and ends at Mecklenburgh Square
Mecklenburgh Square
Mecklenburgh Square is a Grade II listed public square located in the King's Cross area of central London. It is notable for the number of historic terraced houses that face directly onto the square....
.

The street contains mainly grade II listed Georgian
Georgian architecture
Georgian architecture is the name given in most English-speaking countries to the set of architectural styles current between 1720 and 1840. It is eponymous for the first four British monarchs of the House of Hanover—George I of Great Britain, George II of Great Britain, George III of the United...
houses built between 1790 and the 1840s. Many of the houses have been converted into offices and are popular with companies in the legal profession and the media. In the last few years, many of these have been converted back to family homes.

In the nineteenth century, it was an exclusive residential street and had gates at either end to restrict entry and these were manned by porters.

"It was a broad, airy, wholesome street - none of your common thoroughfares, to be rattled through by vulgar cabs and earth-shaking Pickford's vans; but a self-included property, with a gate at each end, and a lodge with a porter in a gold-laced hat and the Doughty arms on the buttons of his mulberry coat, to prevent any one, except with a mission to one of the houses, from, intruding on the exclusive territory."

A notable resident of Doughty Street was Charles Dickens
Charles Dickens
Charles John Huffam Dickens was an English novelist, generally considered the greatest of the Victorian period. Dickens enjoyed a wider popularity and fame than had any previous author during his lifetime, and he remains popular, having been responsible for some of English literature's most iconic...
. On March 25, 1837, Dickens moved with his family
Dickens family
The Dickens family are the descendants of John Dickens, the father of the English novelist Charles Dickens. The descendants of Charles Dickens include the novelist Monica Dickens, the writer Lucinda Dickens Hawksley and the actors Harry Lloyd and Brian Forster....
into No. 48 (on which he had a three year lease at £80 a year) where he would remain until December 1839.