The Society’s main charitable objective is to improve the care of people with respiratory
Respiratory disease
Respiratory disease is a medical term that encompasses pathological conditions affecting the organs and tissues that make gas exchange possible in higher organisms, and includes conditions of the upper respiratory tract, trachea, bronchi, bronchioles, alveoli, pleura and pleural cavity, and the...
and associated disorders, which it aims to achieve by: 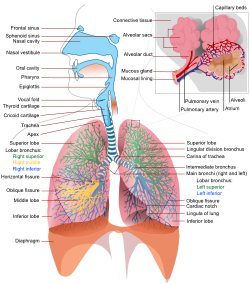 BTS is a membership organization
Membership organization
A membership organization is a broad term for a group or body which has members. Typically any member of the public can join and a membership fee or "subscription" is payable, but arrangements vary widely...
, with nearly 3000 members from the respiratory health sector. These include doctor
Physician
A physician is a health care provider who practices the profession of medicine, which is concerned with promoting, maintaining or restoring human health through the study, diagnosis, and treatment of disease, injury and other physical and mental impairments...
s, nurses, respiratory physiotherapists, scientists and other professionals with an interest in respiratory disease.

The Society also works in partnership with a range of organisations to achieve its objectives. These partners include other respiratory health professional groups, organisations representing patients and carers, medical and surgical Royal College
Royal College
A Royal College in some Commonwealth countries is technically a college which has received permission to use the prefix Royal. Permission is usually granted through a Royal Charter. The charter normally confers a constitution with perpetual succession and the right to sue or be sued independently...
s and other specialist societies.

BTS currently has eight members of staff and a number of other associates who deal with the day-to-day running of the Society, including a Chief Executive and a Deputy Chief Executive.

BTS is managed by its Trustee
Trustee
Trustee is a legal term which, in its broadest sense, can refer to any person who holds property, authority, or a position of trust or responsibility for the benefit of another...
s, who are the officers and members of the Executive Committee. The President and President-elect are elected annually by the membership. The other officers serve for three years and nomination
Nomination
Nomination is part of the process of selecting a candidate for either election to an office, or the bestowing of an honor or award.In the context of elections for public office, a candidate who has been selected by a political party is normally said to be the nominee of that party...
s for these posts are sought from the membership.

BTS has five established Standing Committees, the chairs of which each sit on the Executive Committee. These Committees are:


In addition, the BTS has newly created a Public Liaison Committee to help the Society to place citizens and those with respiratory disease at the centre of their work. The Chair of this Committee will be a Trustee of the Society.

BTS has a network of Specialist Advisory Groups which are made up of specialist professionals and provide expert support opinion.

Each Specialist Advisory Group focuses on a specific issue:

The production of evidence-based
Evidence-based medicine
Evidence-based medicine or evidence-based practice aims to apply the best available evidence gained from the scientific method to clinical decision making. It seeks to assess the strength of evidence of the risks and benefits of treatments and diagnostic tests...
Guidelines for good clinical practice
Good clinical practice
Good Clinical Practice is an international quality standard that is provided by International Conference on Harmonisation , an international body that defines standards, which governments can transpose into regulations for clinical trials involving human subjects.Good Clinical Practice guidelines...
lies at the heart of the Society’s work. Guidelines are produced by multidisciplinary groups working under the auspices of the Society’s Standards of Care Committee, and are published in the journal Thorax.
The British Guideline for the Management of Asthma, produced jointly by BTS and SIGN, enjoys international recognition and is updated annually.
Other recent Guidelines include the BTS Guideline for Emergency Oxygen Use in Adult Patients, and the BTS/ACPRC Guideline for Physiotherapy Management of the Adult Spontaneously Breathing Patient.
Copies of all BTS guidelines are available on the BTS website.

BTS holds two annual conferences; the Summer Meeting in the last week of June and the Winter Meeting which takes place at the Queen Elizabeth II Conference Centre
Queen Elizabeth II Conference Centre
The Queen Elizabeth II Conference Centre is a conference centre in the City of Westminster, London. It is located in the heart of the city, a minute's walk from the Palace of Westminster, seat of the United Kingdom's Parliament...
in London
London
London is the capital city of :England and the :United Kingdom, the largest metropolitan area in the United Kingdom, and the largest urban zone in the European Union by most measures. Located on the River Thames, London has been a major settlement for two millennia, its history going back to its...
in the first week of December. These Meetings bring together medical professionals with an interest in respiratory medicine
Respiratory Medicine
The Respiratory Medicine journal is published by Elsevier Science. Its subjects are internal medicine and practice of medicine.Its ISSN is 0954-6111. Its impact factor in 2004 was 2,086....
.

The Summer Meeting is the main annual educational event, with clinical updates and the opportunity for a multi-disciplinary audience to discuss key issues and share good practice.
There is also a wide-ranging programme of short courses.

The BTS Winter Meeting attracts over 2000 delegates each year and is the UK’s primary respiratory scientific meeting, with the emphasis on presenting updates on current respiratory research and symposia
Symposium
In ancient Greece, the symposium was a drinking party. Literary works that describe or take place at a symposium include two Socratic dialogues, Plato's Symposium and Xenophon's Symposium, as well as a number of Greek poems such as the elegies of Theognis of Megara...
from leading researchers from all over the world. Young Investigators and Medical Students are encouraged to put forward abstracts and prizes are awarded in each category.
The source of this article is wikipedia, the free encyclopedia.  The text of this article is licensed under the GFDL.