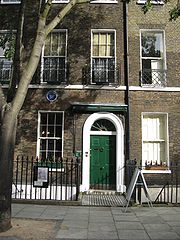 The Charles Dickens Museum is at 48 Doughty Street
Doughty Street
Doughty Street is a broad tree lined street in the Holborn district of the London Borough of Camden. The southern part is a continuation of the short John Street, which comes off Theobalds Road. The northern part crosses Guilford Street and ends at Mecklenburgh Square.The street contains mainly...
in Holborn
Holborn
Holborn is an area of Central London. Holborn is also the name of the area's principal east-west street, running as High Holborn from St Giles's High Street to Gray's Inn Road and then on to Holborn Viaduct...
, London Borough of Camden
London Borough of Camden
In 1801, the civil parishes that form the modern borough were already developed and had a total population of 96,795. This continued to rise swiftly throughout the 19th century, as the district became built up; reaching 270,197 in the middle of the century...
, England
England
England is a country that is part of the United Kingdom. It shares land borders with Scotland to the north and Wales to the west; the Irish Sea is to the north west, the Celtic Sea to the south west, with the North Sea to the east and the English Channel to the south separating it from continental...
. It occupies a typical Georgian
Georgian architecture
Georgian architecture is the name given in most English-speaking countries to the set of architectural styles current between 1720 and 1840. It is eponymous for the first four British monarchs of the House of Hanover—George I of Great Britain, George II of Great Britain, George III of the United...
terraced house which was Charles Dickens
Charles Dickens
Charles John Huffam Dickens was an English novelist, generally considered the greatest of the Victorian period. Dickens enjoyed a wider popularity and fame than had any previous author during his lifetime, and he remains popular, having been responsible for some of English literature's most iconic...
' home from March 25, 1837 (a year after his marriage) to December 1839. He and his wife Catherine lived here with the eldest three of their ten children, with the older two of Dicken's daughters, Mary Dickens
Mary Dickens
Mary 'Mamie' Angela Dickens was the oldest daughter of English novelist Charles Dickens and his wife Catherine...
and Kate Macready Dickens
Kate Perugini
Kate Perugini was an English painter of the Victorian era and the daughter of Charles Dickens.-Biography:...
being born in the house.

A new addition to the household was Dickens' younger brother Frederick
Frederick Dickens
Frederick William Dickens was the son of John and Elizabeth Dickens and was Charles Dickens' younger brother, who lived with Charles when he moved on to Furnival's Inn in 1834...
. Also, Catherine's 17 year old sister Mary moved with them from Furnival's Inn
Furnival's Inn
Furnival's Inn was an Inn of Chancery which formerly stood on the site of the present Holborn Bars building in Holborn, London, England.-History:...
to offer support to her newly married sister and brother-in-law. It was not unusual for a woman's unwed sister to live with and help a newly married couple. Dickens became very attached to Mary, and she died in his arms after a brief illness in 1837. She became a character in many of his books, and her death is fictionalized as the death of Little Nell
Little Nell
Little Nell may refer to:* Nell Campbell , Australian actress, club owner and singer* Nell Trent, fictional heroine of Charles Dickens's novel The Old Curiosity Shop...
. Dickens had a three year lease (at £80 a year) on the property. He would remain here until 1839 after which he moved on to grander homes as his wealth increased and his family grew. However, this is the only surviving house that he lived in London.

Spread over four floors, the Charles Dickens Museum holds the world's most important collection of paintings, rare editions, manuscripts, original furniture and other items relating to the life and work of Dickens. Perhaps the best-known exhibit is the portrait of Dickens known as Dickens' Dream by R.W. Buss, an original illustrator of The Pickwick Papers. This unfinished portrait shows Dickens in his study at Gads Hill Place
Gads Hill Place
Gads Hill Place in Higham, Kent, sometimes spelt Gadshill Place and Gad's Hill Place, was the country home of Charles Dickens, the most successful British author of the Victorian era....
surrounded by many of the characters he had created.

The two years that Dickens lived in the house were extremely productive, for here he completed The Pickwick Papers
The Pickwick Papers
The Posthumous Papers of the Pickwick Club is the first novel by Charles Dickens. After the publication, the widow of the illustrator Robert Seymour claimed that the idea for the novel was originally her husband's; however, in his preface to the 1867 edition, Dickens strenuously denied any...
(1836), wrote the whole of Oliver Twist
Oliver Twist
Oliver Twist; or, The Parish Boy's Progress is the second novel by English author Charles Dickens, published by Richard Bentley in 1838. The story is about an orphan Oliver Twist, who endures a miserable existence in a workhouse and then is placed with an undertaker. He escapes and travels to...
(1838) and Nicholas Nickleby (1838–39) and worked on Barnaby Rudge
Barnaby Rudge
Barnaby Rudge: A Tale of the Riots of Eighty is a historical novel by British novelist Charles Dickens. Barnaby Rudge was one of two novels that Dickens published in his short-lived weekly serial Master Humphrey's Clock...
(1840–41).

The building at 48 Doughty Street was threatened with demolition in 1923, but was saved by the Dickens Fellowship
Dickens Fellowship
The Dickens Fellowship was founded in 1902, and is an international association of people from all walks of life who share an interest in the life and works of Victorian era novelist Charles Dickens....
, founded in 1902, who raised the mortgage and bought the property's freehold. The house was renovated and the Dickens House Museum was opened in 1925, under the direction of an independent trust. The museum has since been renamed the Charles Dickens Museum.