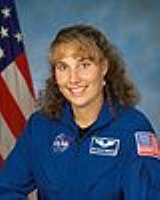 Encyclopedia
Dorothy Marie "Dottie" Metcalf-Lindenburger was born on May 2, 1975 in Colorado Springs, Colorado
Colorado Springs, Colorado
Colorado Springs is a Home Rule Municipality that is the county seat and most populous city of El Paso County, Colorado, United States. Colorado Springs is located in South-Central Colorado, in the southern portion of the state. It is situated on Fountain Creek and is located south of the Colorado...
and married Jason Metcalf-Lindenburger, a seventh grade teacher at the time, in 2000. She was a science teacher at Hudson's Bay High School
Hudson's Bay High School
Hudson's Bay High School is located in Vancouver, Washington, USA, in the Central Park area of Vancouver. Hudson's Bay is known for having two strong magnet programs, as well as a children's day care and district-wide mothers transportation program. It is located across from Clark College, where...
in Vancouver, Washington
Vancouver, Washington
Vancouver is a city on the north bank of the Columbia River in the U.S. state of Washington. Incorporated in 1857, it is the fourth largest city in the state with a 2010 census population of 161,791 as of April 1, 2010...
when she was selected in 2004 as an Educator Mission Specialist. She was the first Space Camp
United States Space Camp
U.S. Space Camp is owned and operated by the Alabama Space Science Exhibit Commission d.b.a. U.S. Space & Rocket Center in Huntsville, Alabama. "Space Camp" refers to both the actual camp and a family of related camp programs offered year-round by the facility. The camp provides residential and...
alumna to become an astronaut.

On July 20, 2009, Metcalf-Lindenburger sang the National Anthem
National anthem
A national anthem is a generally patriotic musical composition that evokes and eulogizes the history, traditions and struggles of its people, recognized either by a nation's government as the official national song, or by convention through use by the people.- History :Anthems rose to prominence...
at the Houston Astros
Houston Astros
The Houston Astros are a Major League Baseball team located in Houston, Texas. They are a member of the National League Central division. The Astros are expected to join the American League West division in 2013. Since , they have played their home games at Minute Maid Park, known as Enron Field...
game against the St. Louis Cardinals
St. Louis Cardinals
The St. Louis Cardinals are a professional baseball team based in St. Louis, Missouri. They are members of the Central Division in the National League of Major League Baseball. The Cardinals have won eleven World Series championships, the most of any National League team, and second overall only to...
in celebration of the 40th anniversary of the Apollo 11
Apollo 11
In early 1969, Bill Anders accepted a job with the National Space Council effective in August 1969 and announced his retirement as an astronaut. At that point Ken Mattingly was moved from the support crew into parallel training with Anders as backup Command Module Pilot in case Apollo 11 was...
moon landing. She has been a long-time lead singer with the all-astronaut rock band, "Max Q
Max Q (Astronaut band)
Max Q is a Houston-based rock band whose members are all astronauts. It was formed in early 1987 by Robert L. Gibson, George Nelson and Brewster Shaw. Gibson named the band after "max Q," the engineering term for the maximum dynamic pressure from the atmosphere experienced by an ascending...
".