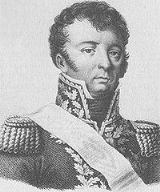 Encyclopedia
General Dominique-Joseph René Vandamme, Count
Count
A count or countess is an aristocratic nobleman in European countries. The word count came into English from the French comte, itself from Latin comes—in its accusative comitem—meaning "companion", and later "companion of the emperor, delegate of the emperor". The adjective form of the word is...
of Unseburg
Unseburg
Unseburg is a village and a former municipality in the district Salzlandkreis, in Saxony-Anhalt, Germany. Since 1 January 2010, it is part of the municipality Bördeaue.-Geography:...
(5 November 1770, Cassel, Nord – 15 July 1830) was a French military officer, who fought in the Napoleonic Wars
Napoleonic Wars
The Napoleonic Wars were a series of wars declared against Napoleon's French Empire by opposing coalitions that ran from 1803 to 1815. As a continuation of the wars sparked by the French Revolution of 1789, they revolutionised European armies and played out on an unprecedented scale, mainly due to...
.

Reportedly a brutal and violent soldier, renowned for insubordination and looting
Looting
Looting —also referred to as sacking, plundering, despoiling, despoliation, and pillaging—is the indiscriminate taking of goods by force as part of a military or political victory, or during a catastrophe, such as during war, natural disaster, or rioting...
, Napoleon is said to have told him, "If I had two of you, the only solution would be to have one hang the other". Napoleon added that he would give Vandamme command of the vanguard were he (Napoleon) to launch a campaign against Lucifer in Hell. 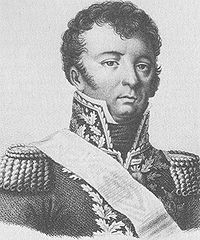 Vandamme enlisted in the army in 1786 and rapidly rose through the ranks. At the outbreak of the French Revolutionary Wars
French Revolutionary Wars
The French Revolutionary Wars were a series of major conflicts, from 1792 until 1802, fought between the French Revolutionary government and several European states...
in 1793 he was a Brigadier General
Brigadier General
Brigadier general is a senior rank in the armed forces. It is the lowest ranking general officer in some countries, usually sitting between the ranks of colonel and major general. When appointed to a field command, a brigadier general is typically in command of a brigade consisting of around 4,000...
. He was court-martialled for looting and suspended. Reinstated, he fought at the First Battle of Stockach on 25 March 1799, but disagreement with General Jean Moreau
Jean Victor Marie Moreau
Jean Victor Marie Moreau was a French general who helped Napoleon Bonaparte to power, but later became a rival and was banished to the United States.- Early life :Moreau was born at Morlaix in Brittany...
led to his being sent to occupation duties in Holland. At the Battle of Austerlitz
Battle of Austerlitz
The Battle of Austerlitz, also known as the Battle of the Three Emperors, was one of Napoleon's greatest victories, where the French Empire effectively crushed the Third Coalition...
in 1805 he led the charge that recaptured the Pratzen Heights.

He was named Count of Unseburg by Napoleon I after the Silesian campaign during the War of the Fourth Coalition
War of the Fourth Coalition
The Fourth Coalition against Napoleon's French Empire was defeated in a war spanning 1806–1807. Coalition partners included Prussia, Russia, Saxony, Sweden, and the United Kingdom....
. In the campaign of 1809, he fought in the battles of Abensberg
Battle of Abensberg
The Battle of Abensberg took place on 20 April 1809, between a Franco-German force under the command of Emperor Napoleon I of France and a reinforced Austrian corps led by Feldmarschall-Leutnant Archduke Louis of Austria. As the day wore on, Feldmarschall-Leutnant Johann von Hiller arrived with...
, Landshut
Battle of Landshut (1809)
The Battle of Landshut took place on April 21, 1809, between the French, Württembergers and Bavarians under Napoleon which numbered about 77,000 strong, and 36,000 Austrians under the General Johann von Hiller...
, Eckmuhl
Battle of Eckmühl
The Battle of Eckmühl fought on 21 April – 22 April 1809, was the turning point of the 1809 Campaign, also known as the War of the Fifth Coalition...
.

In the campaign of 1813 Vandamme's division was encircled by the Prussian General Kleist
Friedrich Graf Kleist von Nollendorf
Friedrich Emil Ferdinand Heinrich Graf Kleist von Nollendorf , born and died in Berlin, was a Prussian field marshal and a member of the old junker family von Kleist....
at Kulm
Battle of Kulm
The Battle of Kulm was a battle near the town Kulm and the village Přestanov in northern Bohemia. It was fought on 29–30 August 1813, during the War of the Sixth Coalition...
and 13,000 men were captured, including Vandamme himself. Taken to Tsar Alexander I of Russia
Alexander I of Russia
Alexander I of Russia , served as Emperor of Russia from 23 March 1801 to 1 December 1825 and the first Russian King of Poland from 1815 to 1825. He was also the first Russian Grand Duke of Finland and Lithuania....
, Vandamme was accused of looting, but is alleged to have replied, "I am neither a plunderer nor a brigand but in any case, my contemporaries and history will not reproach me for having soaked my hands in the blood of my father" (an allusion to the murder of Paul I of Russia
Paul I of Russia
Paul I was the Emperor of Russia between 1796 and 1801. He also was the 72nd Prince and Grand Master of the Order of Malta .-Childhood:...
).

In the campaign of 1815
Hundred Days
The Hundred Days, sometimes known as the Hundred Days of Napoleon or Napoleon's Hundred Days for specificity, marked the period between Emperor Napoleon I of France's return from exile on Elba to Paris on 20 March 1815 and the second restoration of King Louis XVIII on 8 July 1815...
he was in command of the 3rd Corps, under the direction of Marshal Grouchy
Emmanuel, marquis de Grouchy
Emmanuel de Grouchy, 2ème Marquis de Grouchy was a French general and marshal.-Biography:Grouchy was born in Paris, the son of François-Jacques de Grouchy, 1st Marquis de Grouchy and intellectual wife Gilberte Fréteau de Pény . His sister was Sophie de Condorcet, a noted femininist...
. He urged Grouchy to join Napoleon at the Battle of Waterloo
Battle of Waterloo
The Battle of Waterloo was fought on Sunday 18 June 1815 near Waterloo in present-day Belgium, then part of the United Kingdom of the Netherlands...
, but Grouchy preferred to pursue the Prussian 3rd Corps under General Johann von Thielmann
Johann von Thielmann
Johann Adolf Freiherr von Thielmann was a Saxon soldier who served with Saxony, Prussia and France during the Napoleonic Wars.-Biography:...
, winning the Battle of Wavre
Battle of Wavre
The Battle of Wavre was the final major military action of the Hundred Days campaign and the Napoleonic Wars. It was fought on 18-19 June 1815 between the Prussian rearguard under the command of General Johann von Thielmann and three corps of the French army under the command of Marshal Grouchy. A...
, but losing the war. After the restoration of Louis XVIII of France
Louis XVIII of France
Louis XVIII , known as "the Unavoidable", was King of France and of Navarre from 1814 to 1824, omitting the Hundred Days in 1815...
Vandamme was exiled to America and settled in Philadelphia amongst other French military exiles. General Vanmdamme was allowed to return by the ordinance of 1 December 1819. He was reestablished in the service in the Ètat-major Général, until his final retirement on 1 January 1825. Afterwards he lived alternatively in Cassel and Ghent
Ghent
Ghent is a city and a municipality located in the Flemish region of Belgium. It is the capital and biggest city of the East Flanders province. The city started as a settlement at the confluence of the Rivers Scheldt and Lys and in the Middle Ages became one of the largest and richest cities of...
, occupying himself with the writing of his Memoirs. He died in his native Cassel, aged 59. His name is inscribed on the North side of the Arc de Triomphe
Arc de Triomphe
-The design:The astylar design is by Jean Chalgrin , in the Neoclassical version of ancient Roman architecture . Major academic sculptors of France are represented in the sculpture of the Arc de Triomphe: Jean-Pierre Cortot; François Rude; Antoine Étex; James Pradier and Philippe Joseph Henri Lemaire...
The source of this article is wikipedia, the free encyclopedia.  The text of this article is licensed under the GFDL.