Encyclopedia
In plate tectonics
Plate tectonics
Plate tectonics is a scientific theory that describes the large scale motions of Earth's lithosphere...
, a divergent boundary or divergent plate boundary (also known as a constructive boundary or an extensional boundary) is a linear feature that exists between two tectonic plates that are moving away from each other. Divergent boundaries within continents initially produce rifts which produce rift valley
Rift valley
A rift valley is a linear-shaped lowland between highlands or mountain ranges created by the action of a geologic rift or fault. This action is manifest as crustal extension, a spreading apart of the surface which is subsequently further deepened by the forces of erosion...
s. Most active divergent plate boundaries occur between oceanic plate
Oceanic crust
Oceanic crust is the part of Earth's lithosphere that surfaces in the ocean basins. Oceanic crust is primarily composed of mafic rocks, or sima, which is rich in iron and magnesium...
s and exist as mid-oceanic ridges. Divergent boundaries also form volcanic islands which occur when the plates move apart to produce gaps which molten lava rises to fill.

Current research indicates that complex convection
Convection
Convection is the movement of molecules within fluids and rheids. It cannot take place in solids, since neither bulk current flows nor significant diffusion can take place in solids....
within the Earth
Earth
Earth is the third planet from the Sun, and the densest and fifth-largest of the eight planets in the Solar System. It is also the largest of the Solar System's four terrestrial planets...
's mantle
Mantle (geology)
The mantle is a part of a terrestrial planet or other rocky body large enough to have differentiation by density. The interior of the Earth, similar to the other terrestrial planets, is chemically divided into layers. The mantle is a highly viscous layer between the crust and the outer core....
allows material to rise to the base of the lithosphere
Lithosphere
The lithosphere is the rigid outermost shell of a rocky planet. On Earth, it comprises the crust and the portion of the upper mantle that behaves elastically on time scales of thousands of years or greater.- Earth's lithosphere :...
beneath each divergent plate boundary.
This supplies the area with vast amounts of heat and a reduction in pressure that melts rock
Rock (geology)
In geology, rock or stone is a naturally occurring solid aggregate of minerals and/or mineraloids.The Earth's outer solid layer, the lithosphere, is made of rock. In general rocks are of three types, namely, igneous, sedimentary, and metamorphic...
from the asthenosphere
Asthenosphere
The asthenosphere is the highly viscous, mechanically weak and ductilely-deforming region of the upper mantle of the Earth...
(or upper mantle) beneath the rift area forming large flood basalt
Flood basalt
A flood basalt or trap basalt is the result of a giant volcanic eruption or series of eruptions that coats large stretches of land or the ocean floor with basalt lava. Flood basalts have occurred on continental scales in prehistory, creating great plateaus and mountain ranges...
or lava flows. Each eruption occurs in only a part of the plate boundary at any one time, but when it does occur, it fills in the opening gap as the two opposing plates move away from each other.

Over millions of years, tectonic plates may move many hundreds of kilometers away from both sides of a divergent plate boundary. Because of this, rocks closest to a boundary are younger than rocks further away on the same plate. 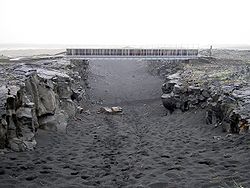 At divergent boundaries, two plates move apart from each other and the space that this creates is filled with new crustal material sourced from molten magma
Magma
Magma is a mixture of molten rock, volatiles and solids that is found beneath the surface of the Earth, and is expected to exist on other terrestrial planets. Besides molten rock, magma may also contain suspended crystals and dissolved gas and sometimes also gas bubbles. Magma often collects in...
that forms below. The origin of new divergent boundaries at triple junction
Triple junction
A triple junction is the point where the boundaries of three tectonic plates meet. At the triple junction a boundary will be one of 3 types - a ridge, trench or transform fault - and triple junctions can be described according to the types of plate margin that meet at them...
s is sometimes thought to be associated with the phenomenon known as hotspots
Hotspot (geology)
The places known as hotspots or hot spots in geology are volcanic regions thought to be fed by underlying mantle that is anomalously hot compared with the mantle elsewhere. They may be on, near to, or far from tectonic plate boundaries. There are two hypotheses to explain them...
. Here, exceedingly large convective cells bring very large quantities of hot asthenospheric material near the surface and the kinetic energy
Kinetic energy
The kinetic energy of an object is the energy which it possesses due to its motion.It is defined as the work needed to accelerate a body of a given mass from rest to its stated velocity. Having gained this energy during its acceleration, the body maintains this kinetic energy unless its speed changes...
is thought to be sufficient to break apart the lithosphere. The hot spot which may have initiated the Mid-Atlantic Ridge system currently underlies Iceland which is widening at a rate of a few centimeters per year.

Divergent boundaries are typified in the oceanic lithosphere by the rifts of the oceanic ridge system, including the Mid-Atlantic Ridge and the East Pacific Rise
East Pacific Rise
The East Pacific Rise is a mid-oceanic ridge, a divergent tectonic plate boundary located along the floor of the Pacific Ocean. It separates the Pacific Plate to the west from the North American Plate, the Rivera Plate, the Cocos Plate, the Nazca Plate, and the Antarctic Plate...
, and in the continental lithosphere by rift valleys such as the famous East African Great Rift Valley
Great Rift Valley
The Great Rift Valley is a name given in the late 19th century by British explorer John Walter Gregory to the continuous geographic trench, approximately in length, that runs from northern Syria in Southwest Asia to central Mozambique in South East Africa...
. Divergent boundaries can create massive fault zones in the oceanic ridge system. Spreading is generally not uniform, so where spreading rates of adjacent ridge blocks are different, massive transform faults occur. These are the fracture zone
Fracture zone
A fracture zone is a linear oceanic feature--often hundreds, even thousands of kilometers long--resulting from the action of offset mid-ocean ridge axis segments. They are a consequence of plate tectonics. Lithospheric plates on either side of an active transform fault move in opposite directions;...
s, many bearing names, that are a major source of submarine
Submarine
A submarine is a watercraft capable of independent operation below the surface of the water. It differs from a submersible, which has more limited underwater capability...
earthquakes. A sea floor map will show a rather strange pattern of blocky structures that are separated by linear features perpendicular to the ridge axis. If one views the sea floor between the fracture zones as conveyor belts carrying the ridge on each side of the rift away from the spreading center the action becomes clear. Crest depths of the old ridges, parallel to the current spreading center, will be older and deeper... (from thermal contraction and subsidence
Subsidence
Subsidence is the motion of a surface as it shifts downward relative to a datum such as sea-level. The opposite of subsidence is uplift, which results in an increase in elevation...
).

It is at mid-ocean ridges that one of the key pieces of evidence forcing acceptance of the seafloor spreading hypothesis was found. Airborne geomagnetic
Earth's magnetic field
Earth's magnetic field is the magnetic field that extends from the Earth's inner core to where it meets the solar wind, a stream of energetic particles emanating from the Sun...
surveys showed a strange pattern of symmetrical magnetic reversals on opposite sides of ridge centers. The pattern was far too regular to be coincidental as the widths of the opposing bands were too closely matched. Scientists had been studying polar reversal
Geomagnetic reversal
A geomagnetic reversal is a change in the Earth's magnetic field such that the positions of magnetic north and magnetic south are interchanged. The Earth's field has alternated between periods of normal polarity, in which the direction of the field was the same as the present direction, and reverse...
s and the link was made by Lawrence W. Morley
Lawrence Morley
Lawrence Morley, Ph.D. is a Canadian geophysicist. He is best known for his studies on the magnetic properties of ocean crust and their effect on plate tectonics.-Biography:Morley worked with Britons Fred Vine and Drummond Matthews...
, Frederick John Vine
Fred Vine
Frederick John Vine is a British marine geologist and geophysicist and was a key contributor to the theory of plate tectonics.-Early life:...
and Drummond Hoyle Matthews
Drummond Matthews
Drummond Hoyle Matthews FRS was a British marine geologist and geophysicist and a key contributor to the theory of plate tectonics...
in the Morley-Vine-Matthews hypothesis
Morley-Vine-Matthews hypothesis
The Vine–Matthews–Morley hypothesis, also known as the Morley–Vine–Matthews hypothesis was the first key scientific test of the seafloor spreading theory of continental drift and Plate tectonics....
. The magnetic banding directly corresponds with the Earth's polar reversals. This was confirmed by measuring the ages of the rocks within each band. The banding furnishes a map in time and space of both spreading rate and polar reversals.