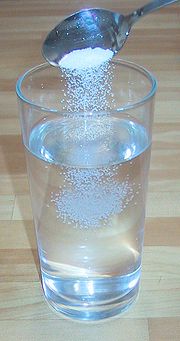 Dissolution testing is widely used in the pharmaceutical industry for optimization of formulation and quality control.

For ionic compound
Ionic compound
In chemistry, an ionic compound is a chemical compound in which ions are held together in a lattice structure by ionic bonds. Usually, the positively charged portion consists of metal cations and the negatively charged portion is an anion or polyatomic ion. Ions in ionic compounds are held together...
s, dissolution takes place when the compounds ionize. This most commonly occurs in polar
Polarity
In physics, polarity is a description of an attribute, typically a binary attribute , or a vector . For example:* An electric charge has a polarity of either positive or negative....
solvents, such as water
Water
Water is a chemical substance with the chemical formula H2O. A water molecule contains one oxygen and two hydrogen atoms connected by covalent bonds. Water is a liquid at ambient conditions, but it often co-exists on Earth with its solid state, ice, and gaseous state . Water also exists in a...
or ammonia
Ammonia
Ammonia is a compound of nitrogen and hydrogen with the formula . It is a colourless gas with a characteristic pungent odour. Ammonia contributes significantly to the nutritional needs of terrestrial organisms by serving as a precursor to food and fertilizers. Ammonia, either directly or...
.

In a colloidal dispersed system, ion dissolution arises, where the dispersed particles exist in equilibrium with their saturated counter part, i.e.

The ability of an ion to preferentially dissolve (as a result of unequal activities) is classified as the Potential Determining Ion. This in turn results in the remaining particle possessing either a net positive/negative surface charge.

Other solid compounds experience dissolution as a breakdown of their crystal lattice, and due to their polarity, or non-polarity, mix with the solvent
Solvent
A solvent is a liquid, solid, or gas that dissolves another solid, liquid, or gaseous solute, resulting in a solution that is soluble in a certain volume of solvent at a specified temperature...
. The solubility of ionic salts in water
Water
Water is a chemical substance with the chemical formula H2O. A water molecule contains one oxygen and two hydrogen atoms connected by covalent bonds. Water is a liquid at ambient conditions, but it often co-exists on Earth with its solid state, ice, and gaseous state . Water also exists in a...
is generally determined by the degree of solvation
Solvation
Solvation, also sometimes called dissolution, is the process of attraction and association of molecules of a solvent with molecules or ions of a solute...
of the ions by water molecules. Such coordination complexes occur by water donating spare electron
Electron
The electron is a subatomic particle with a negative elementary electric charge. It has no known components or substructure; in other words, it is generally thought to be an elementary particle. An electron has a mass that is approximately 1/1836 that of the proton...
s on the oxygen
Oxygen
Oxygen is the element with atomic number 8 and represented by the symbol O. Its name derives from the Greek roots ὀξύς and -γενής , because at the time of naming, it was mistakenly thought that all acids required oxygen in their composition...
atom to the ion.

Compounds in a fluid state may also dissolve in another liquid depending on the compatibility of the chemical and physical bonds in the substance with those of the solvent. Hydrogen bond
Hydrogen bond
A hydrogen bond is the attractive interaction of a hydrogen atom with an electronegative atom, such as nitrogen, oxygen or fluorine, that comes from another molecule or chemical group. The hydrogen must be covalently bonded to another electronegative atom to create the bond...
s play an important role in aqueous dissolution.

Compounds in the gaseous state will dissolve in liquids dependent on the interaction of their bonds with the liquid solvent.

The rate of dissolution depends on:

The rate of dissolution can be often expressed by the Noyes-Whitney equation of the form:

For dissolution limited by diffusion
Diffusion
Molecular diffusion, often called simply diffusion, is the thermal motion of all particles at temperatures above absolute zero. The rate of this movement is a function of temperature, viscosity of the fluid and the size of the particles...
, Cs is equal to the solubility of the substance.