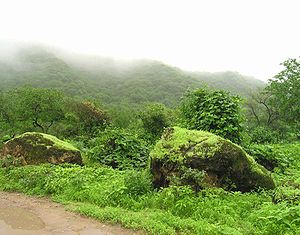 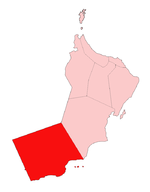 The Dhofar region lies in Southern Oman
Oman
Oman , officially called the Sultanate of Oman , is an Arab state in southwest Asia on the southeast coast of the Arabian Peninsula. It is bordered by the United Arab Emirates to the northwest, Saudi Arabia to the west, and Yemen to the southwest. The coast is formed by the Arabian Sea on the...
, on the eastern border with Yemen
Yemen
The Republic of Yemen , commonly known as Yemen , is a country located in the Middle East, occupying the southwestern to southern end of the Arabian Peninsula. It is bordered by Saudi Arabia to the north, the Red Sea to the west, and Oman to the east....
. Its mountainous area covers 99300 km² (38,339.9 sq mi) and has a population of 215,960 as of the 2003 census. The largest town in the region is Salalah
Salalah
Salalah , is the capital and seat of the governor or Wali of the southern Omani province of Dhofar. The population of Salalah was 197,169 in 2009....
. Historically, it was the chief source of frankincense
Frankincense
Frankincense, also called olibanum , is an aromatic resin obtained from trees of the genus Boswellia, particularly Boswellia sacra, B. carteri, B. thurifera, B. frereana, and B. bhaw-dajiana...
in the world. However, its frankincense is now mostly used locally. (Somalia
Somalia
Somalia , officially the Somali Republic and formerly known as the Somali Democratic Republic under Socialist rule, is a country located in the Horn of Africa. Since the outbreak of the Somali Civil War in 1991 there has been no central government control over most of the country's territory...
is now the leading exporter.)

While Arabic
Arabic language
Arabic is a name applied to the descendants of the Classical Arabic language of the 6th century AD, used most prominently in the Quran, the Islamic Holy Book...
speakers from the dominant Omani
Omani
Omani may refer to:* Something of, from, or related to Oman, an Arab coujntry in southwestern Asia** A person from Oman or of Omani descent, collectively referred to as Omanis; see Demographics of Oman and Culture of Oman...
culture have come to live in the province, especially the larger cities and towns, Dhofar has been the traditional homeland of many tribespeople speaking a variety of South Arabian Semitic
Semitic
In linguistics and ethnology, Semitic was first used to refer to a language family of largely Middle Eastern origin, now called the Semitic languages...
languages. One of the languages most commonly spoken by the Qara
Qara
The Qara are a grouping of tribes currently resident in Oman. Members of this tribe Amr Hakli the grand grandfather Hakli tribe of Oman who was the first immigrant from Yemen to Dhofar one thousand years ago and this tribe known in Dhofar as Qara tribes...
(Ehkelô), Shahra, Barahama, ِAl Mashaikh and Bathira mountain tribes is called Jeballi, (or Shehri)—popularly referred to as Jeballi people or mountain talk. The Yemeni language of Mehri is somewhat linked to Jeballi. Other indigenous groups speaking smaller languages such as Bathari live in the coastal towns of Shuwaymiya and Sharbithat
Sharbithat
Sharbithat is a coastal town in Dhofar, Oman. It is located at around , and is located in the wilayat of Sheleem. Sharbithat is situated around 430 km from Salalah, which is in the south of Sultanate of Oman.-Characteristics:...
. The Harasis, speaking Harsusi
Harsusi language
Harsusi is a Semitic language closely related to Mehri. It is spoken by 1,000 to 2,000 Harasis in Jiddat al-Harasis, Dhofar Province, Oman. Reportedly, the Harasis are increasing their use of the more dominant Mehri and are bilingual in Arabic....
, number 1,000–2,000 and live in Jiddat al-Harasis.

Dhofar and a small portion of the northern tip of Yemen are directly exposed to the South East monsoon
Monsoon
Monsoon is traditionally defined as a seasonal reversing wind accompanied by corresponding changes in precipitation, but is now used to describe seasonal changes in atmospheric circulation and precipitation associated with the asymmetric heating of land and sea...
from mid-June to mid-September; this is known as the Khareef
Khareef
Khareef is a colloquial Arabic term used in southern Oman and southeastern Yemen for the south east monsoon. The monsoon affects Dhofar Governorate and Al Mahrah Governorate from about June to early September. Towns such as Salalah depend upon the khareef for water supply...
. As a result, it has a lush green climate during the monsoon season and for sometime after until the vegetation loses its moisture. Dhofar's temporarily wet climate contrasts sharply with the neighboring barren Empty Quarter Desert. The Salalah plain was once a well cultivated area with a sophisticated irrigation system. During World War I
World War I
World War I , which was predominantly called the World War or the Great War from its occurrence until 1939, and the First World War or World War I thereafter, was a major war centred in Europe that began on 28 July 1914 and lasted until 11 November 1918...
it was fertile enough to produce food and grain to supply a large proportion of the requirement of the British Army
British Army
The British Army is the land warfare branch of Her Majesty's Armed Forces in the United Kingdom. It came into being with the unification of the Kingdom of England and Scotland into the Kingdom of Great Britain in 1707. The new British Army incorporated Regiments that had already existed in England...
fighting in Mesopotamia
Mesopotamia
Mesopotamia is a toponym for the area of the Tigris–Euphrates river system, largely corresponding to modern-day Iraq, northeastern Syria, southeastern Turkey and southwestern Iran.Widely considered to be the cradle of civilization, Bronze Age Mesopotamia included Sumer and the...
. It was ruled by the Kathiri Sultanate, Dhofar Sultanate and Ottoman Empire
Ottoman Empire
The Ottoman EmpireIt was usually referred to as the "Ottoman Empire", the "Turkish Empire", the "Ottoman Caliphate" or more commonly "Turkey" by its contemporaries...
(1539–1829) before Omani rule.

A counter-insurgency
Counter-insurgency
A counter-insurgency or counterinsurgency involves actions taken by the recognized government of a nation to contain or quell an insurgency taken up against it...
campaign—the Dhofar Rebellion
Dhofar Rebellion
The Dhofar Rebellion was launched in the province of Dhofar against the Sultanate of Muscat and Oman, which had British support, from 1962 to 1976. It ended with the defeat of the rebels, but the state of Oman had to be radically reformed and modernised to cope with the campaign.-Background:In...
—was fought here by the Sultan of Oman's Armed Forces
Sultan of Oman's Armed Forces
The Sultan of Oman's Armed Forces are the Royal Army of Oman , Royal Navy of Oman, Royal Air Force of Oman and other defence forces of the Sultanate of Oman...
in 1965–1975 against guerrilla
Guerrilla warfare
Guerrilla warfare is a form of irregular warfare and refers to conflicts in which a small group of combatants including, but not limited to, armed civilians use military tactics, such as ambushes, sabotage, raids, the element of surprise, and extraordinary mobility to harass a larger and...
fighters of the Marxist Popular Front for the Liberation of Oman and the Persian Gulf
Popular Front for the Liberation of Oman
The Popular Front for the Liberation of Oman was a Marxist and Arab nationalist revolutionary organisation in the Sultanate of Oman...
(PFLOAG), supported by Communist
Communism
Communism is a social, political and economic ideology that aims at the establishment of a classless, moneyless, revolutionary and stateless socialist society structured upon common ownership of the means of production...
South Yemen after that territory's independence and several other socialist states including East Germany. It aimed to depose the Sultan. The Sultan's forces, assisted by the United Kingdom
United Kingdom
The United Kingdom of Great Britain and Northern IrelandIn the United Kingdom and Dependencies, other languages have been officially recognised as legitimate autochthonous languages under the European Charter for Regional or Minority Languages...
, Iran
Iran
Iran , officially the Islamic Republic of Iran , is a country in Southern and Western Asia. The name "Iran" has been in use natively since the Sassanian era and came into use internationally in 1935, before which the country was known to the Western world as Persia...
, and support from loaned officers and doctors from Pakistan
Pakistan
Pakistan , officially the Islamic Republic of Pakistan is a sovereign state in South Asia. It has a coastline along the Arabian Sea and the Gulf of Oman in the south and is bordered by Afghanistan and Iran in the west, India in the east and China in the far northeast. In the north, Tajikistan...
and India
India
India , officially the Republic of India , is a country in South Asia. It is the seventh-largest country by geographical area, the second-most populous country with over 1.2 billion people, and the most populous democracy in the world...
, prevailed, and once the campaign was declared over in December 1975, the active remainder of PFLOAG forces surrendered.

In Mormon
Mormon
The term Mormon most commonly denotes an adherent, practitioner, follower, or constituent of Mormonism, which is the largest branch of the Latter Day Saint movement in restorationist Christianity...
culture, Dhofar is the most popular traditional location of the Book of Mormon
Book of Mormon
The Book of Mormon is a sacred text of the Latter Day Saint movement that adherents believe contains writings of ancient prophets who lived on the American continent from approximately 2600 BC to AD 421. It was first published in March 1830 by Joseph Smith, Jr...
land of Bountiful
Bountiful (Book of Mormon)
Bountiful is the name of two places described in the Book of Mormon, a religious narrative dictated in 1829 by Joseph Smith, Jr. The first location is set in the Old World near Jerusalem, and the second location is set somewhere in the Americas...
. This association is not an official LDS Church doctrine, however.

Dhofar is a tribal community
Tribe
A tribe, viewed historically or developmentally, consists of a social group existing before the development of, or outside of, states.Many anthropologists use the term tribal society to refer to societies organized largely on the basis of kinship, especially corporate descent groups .Some theorists...
, home to many ancient tribes. The Arab tribes include Al-Hakli (Qara), Al Kathiri, Al-Hashmeis, Al-Yafei, Al-Mashaikhi, Al-Shahri, Al-Mahri, Al-Batahri, and Al-Barami.

The Dhofar region is rich in meteorites.

The Dhofar governorate consists of ten district
District
Districts are a type of administrative division, in some countries managed by a local government. They vary greatly in size, spanning entire regions or counties, several municipalities, or subdivisions of municipalities.-Austria:...
s (wilayat):


Salalah is the capital of Dhofar Governorate.