Encyclopedia
The Sabah State Legislative Assembly is the state legislature of the Malaysian state
States of Malaysia
Malaysia is a federation which consists of thirteen states and three federal territories . Eleven states and two federal territories are located on the Malay Peninsula while the remaining two states and one federal territory are on the island of Borneo.-The states and federal territories:Malaysia...
of Sabah
Sabah
Sabah is one of 13 member states of Malaysia. It is located on the northern portion of the island of Borneo. It is the second largest state in the country after Sarawak, which it borders on its southwest. It also shares a border with the province of East Kalimantan of Indonesia in the south...
. It is a unicameral institution, consisting of a total of 60 lawmakers including one speaker
Speaker (politics)
The term speaker is a title often given to the presiding officer of a deliberative assembly, especially a legislative body. The speaker's official role is to moderate debate, make rulings on procedure, announce the results of votes, and the like. The speaker decides who may speak and has the...
.

The unicameral state legislature, whose members are called state assemblymen, convenes at the Legislative Assembly building at Likas, Kota Kinabalu
Kota Kinabalu
Kota Kinabalu , formerly known as Jesselton, is the capital of Sabah state in East Malaysia. It is also the capital of the West Coast Division of Sabah. The city is located on the northwest coast of Borneo facing the South China Sea. The Tunku Abdul Rahman National Park lies on one side and Mount...
. It has 60 seats, the majority of which are held by the Barisan Nasional
Barisan Nasional
Barisan Nasional is a major political coalition in Malaysia, formed in 1973 as the successor to the Alliance . Along with its predecessor, it has been Malaysia's federal ruling political force since independence...
coalition following the 2008 general elections
Malaysian general election, 2008
The 12th Malaysian general election was held on March 8, 2008, in accordance with Malaysian laws for national elections, which states that a general election must be held no later than five years subsequent to the previous elections; the previous general election was held in 2004...
. As of 2010, the State Legislative Assembly is sitting in its 11th edition and the Barisan Nasional coalition has control over 57 seats in the house while Sabah Progressive Party
Sabah Progressive Party
The Sabah Progressive Party is a political party based in Sabah, East Malaysia. It was registered on 21 January 1994 by dissidents led by former Sabah Chief Minister Datuk Yong Teck Lee from Parti Bersatu Sabah . Formerly a component party in the ruling Barisan Nasional coalition, SAPP officially...
(SAPP) has two and Democratic Action Party
Democratic Action Party
The Democratic Action Party, or DAP is a secular, multi-racial, social democratic Malaysian political party.The DAP is one of the three major opposition parties in Malaysia, along with the PKR and PAS, that are seen as electable alternatives to the Barisan Nasional coalition of parties...
(DAP) has one. 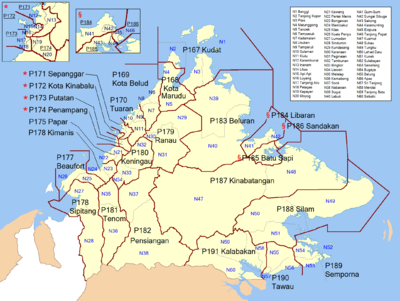