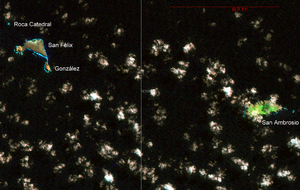 The Desventuradas Islands, also known as Islas de los Desventurados, is a group of four small island
Island
An island or isle is any piece of sub-continental land that is surrounded by water. Very small islands such as emergent land features on atolls can be called islets, cays or keys. An island in a river or lake may be called an eyot , or holm...
s located 850 kilometres (528.2 mi) off the coast of Chile
Chile
Chile ,officially the Republic of Chile , is a country in South America occupying a long, narrow coastal strip between the Andes mountains to the east and the Pacific Ocean to the west. It borders Peru to the north, Bolivia to the northeast, Argentina to the east, and the Drake Passage in the far...
, northwest of Santiago
Santiago, Chile
Santiago , also known as Santiago de Chile, is the capital and largest city of Chile, and the center of its largest conurbation . It is located in the country's central valley, at an elevation of above mean sea level...
in the Pacific Ocean
Pacific Ocean
The Pacific Ocean is the largest of the Earth's oceanic divisions. It extends from the Arctic in the north to the Southern Ocean in the south, bounded by Asia and Australia in the west, and the Americas in the east.At 165.2 million square kilometres in area, this largest division of the World...
. The islands together have a total land area of four square kilometers.

The vegetation
Vegetation
Vegetation is a general term for the plant life of a region; it refers to the ground cover provided by plants. It is a general term, without specific reference to particular taxa, life forms, structure, spatial extent, or any other specific botanical or geographic characteristics. It is broader...
is a miniature mosaic of matorral
Matorral
Matorral is a Spanish word, along with tomillares, for shrubland, thicket or bushes. It is used in naming and describing a Mediterranean climate ecosystem in Southern Europe.-Mediterranean region:...
, barren rock, various size trees, and shrubs mixed with ferns and perennial herbs.
There are no permanent sources of fresh water on the island
Island
An island or isle is any piece of sub-continental land that is surrounded by water. Very small islands such as emergent land features on atolls can be called islets, cays or keys. An island in a river or lake may be called an eyot , or holm...
s. Vertebrates inhabiting both islands are exclusively limited to birds. Ten species
Species
In biology, a species is one of the basic units of biological classification and a taxonomic rank. A species is often defined as a group of organisms capable of interbreeding and producing fertile offspring. While in many cases this definition is adequate, more precise or differing measures are...
of marine birds and one land bird species, some of them endangered, make their nests on or visit the islands.

Because of their isolation and difficulty of access, there are no human settlements on these islands, but a detachment of the Chilean Navy
Chilean Navy
-Independence Wars of Chile and Peru :The Chilean Navy dates back to 1817. A year before, following the Battle of Chacabuco, General Bernardo O'Higgins prophetically declared "this victory and another hundred shall be of no significance if we do not gain control of the sea".This led to the...
is stationed on Isla San Félix, which also hosts a 2,000 meter runway (ICAO code for the airfield: SCFX).

San Felix played a part in the Falklands war
Falklands War
The Falklands War , also called the Falklands Conflict or Falklands Crisis, was fought in 1982 between Argentina and the United Kingdom over the disputed Falkland Islands and South Georgia and the South Sandwich Islands...
. In May 1982 the Chilean government allowed RAF Nimrod MR2's to fly maritime reconnaissance sorties from the island, gathering information on the movements of the Argentine Navy.