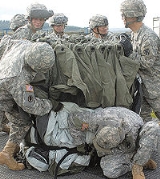 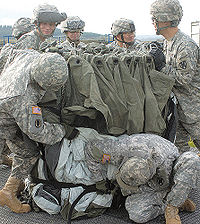 DRASH is a portable, geodesic
Geodesic dome
A geodesic dome is a spherical or partial-spherical shell structure or lattice shell based on a network of great circles on the surface of a sphere. The geodesics intersect to form triangular elements that have local triangular rigidity and also distribute the stress across the structure. When...
shelter that can be set up within minutes of arriving on site with no special tools. The structure is supported by composite struts. DHS Systems LLC handles all the manufacturing, maintenance, training and sales for these shelters.

DRASH shelters have footprints from 109 sq ft (10.1 m²) up to 1250 sq ft (116.1 m²). Each DRASH shelter comes with flooring and ground covers manufactured from polyester
Polyester
Polyester is a category of polymers which contain the ester functional group in their main chain. Although there are many polyesters, the term "polyester" as a specific material most commonly refers to polyethylene terephthalate...
and nylon
Nylon
Nylon is a generic designation for a family of synthetic polymers known generically as polyamides, first produced on February 28, 1935, by Wallace Carothers at DuPont's research facility at the DuPont Experimental Station...
to US military standards. DRASH also provides generators and trailers
Trailer (vehicle)
A trailer is generally an unpowered vehicle pulled by a powered vehicle. Commonly, the term trailer refers to such vehicles used for transport of goods and materials....
plus various accessories for the shelters themselves. Several of these accessories can be used to link shelters together. For transport or storage, the shelters pack down to less than 2% of its deployed size into a transport bag that can be stowed on a trailer or HMMWV. Teams of four to six can easily erect a shelter simply by pulling on the sides of the shelter and raising the shelter in designated "push points" on the shelter.

DHS Systems founder and CEO A. Jon Prusmack began building DRASH shelters more than 20 years ago after being inspired by pop-up geodesic domes he came across at trade shows. He founded the company in 1984 and DRASH shelters quickly started to be purchased by military units for use as command posts, tactical operations centers, communications centers, battalion aid stations, and forward surgical support stations.

In 2009, it was reported that the company was working on a line of shelters that better matched power supply to demand.

The company also plans to begin incorporating a new energy efficient insulation barrier, insect repellents and a shelter that can protect sensitive equipment from electro-magnetic signals and radio frequency interference.

Most notably, in 2008, the U.S. Army contracted DRASH manufacturer DHS Systems and Northrop Grumman Corporation
Northrop Grumman
Northrop Grumman Corporation is an American global aerospace and defense technology company formed by the 1994 purchase of Grumman by Northrop. The company was the fourth-largest defense contractor in the world as of 2010, and the largest builder of naval vessels. Northrop Grumman employs over...
to provide a family of trailer-mounted support systems under its Standard Integrated Command Post System (SICPS) program. Under the contract, DHS is manufacturing DRASH shelters, while Northrop will be responsible for program management and integrated logistics support.

DRASH shelters have been deployed extensively since the beginning of the wars in Iraq and Afghanistan
War in Afghanistan (2001–present)
The War in Afghanistan began on October 7, 2001, as the armed forces of the United States of America, the United Kingdom, Australia, and the Afghan United Front launched Operation Enduring Freedom...
. DRASH is also currently in use with troops stationed around the world, including the Third Army
United States Army Central
United States Army Central is an Army Service Component Command of the United States Army and is also dual-hatted as the "United States Third Army". It is the Army Component of U.S...
in Kuwait, and Joint Task Force Bravo
Joint Task Force Bravo
Joint Task Force Bravo is one of three Task Forces under United States Southern Command . JTF-B is headquartered at Soto Cano Air Base, Honduras , located 10 miles south of the Honduran city of Comayagua.-Mission:JTF-Bravo conducts joint, combined and interagency operations, and supports...
's Mobile Surgical Team in Honduras
Honduras
Honduras is a republic in Central America. It was previously known as Spanish Honduras to differentiate it from British Honduras, which became the modern-day state of Belize...
.

DRASH has logistics
Logistics
Logistics is the management of the flow of goods between the point of origin and the point of destination in order to meet the requirements of customers or corporations. Logistics involves the integration of information, transportation, inventory, warehousing, material handling, and packaging, and...
teams on site in Iraq
Iraq
Iraq ; officially the Republic of Iraq is a country in Western Asia spanning most of the northwestern end of the Zagros mountain range, the eastern part of the Syrian Desert and the northern part of the Arabian Desert....
, Kuwait
Kuwait
The State of Kuwait is a sovereign Arab state situated in the north-east of the Arabian Peninsula in Western Asia. It is bordered by Saudi Arabia to the south at Khafji, and Iraq to the north at Basra. It lies on the north-western shore of the Persian Gulf. The name Kuwait is derived from the...
, Germany
Germany
Germany , officially the Federal Republic of Germany , is a federal parliamentary republic in Europe. The country consists of 16 states while the capital and largest city is Berlin. Germany covers an area of 357,021 km2 and has a largely temperate seasonal climate...
and Eastern Europe
Eastern Europe
Eastern Europe is the eastern part of Europe. The term has widely disparate geopolitical, geographical, cultural and socioeconomic readings, which makes it highly context-dependent and even volatile, and there are "almost as many definitions of Eastern Europe as there are scholars of the region"...
. These teams do all of the repair and support work for the shelters, generators and trailers.

Hurricane Katrina
Hurricane Katrina
Hurricane Katrina of the 2005 Atlantic hurricane season was a powerful Atlantic hurricane. It is the costliest natural disaster, as well as one of the five deadliest hurricanes, in the history of the United States. Among recorded Atlantic hurricanes, it was the sixth strongest overall...
caused a surge of interest in DRASH shelters. In Louisiana
Louisiana
Louisiana is a state located in the southern region of the United States of America. Its capital is Baton Rouge and largest city is New Orleans. Louisiana is the only state in the U.S. with political subdivisions termed parishes, which are local governments equivalent to counties...
, an emergency medical team used a DRASH shelter as a mobile hospital. In Mississippi, DRASH shelters were used as living quarters for the State Police aiding victims of the disaster.

Since then, DRASH shelters have been deployed following hurricanes across the Gulf region, as well as for other civilian operations around the country.

In 2006, the state of Connecticut
Connecticut
Connecticut is a state in the New England region of the northeastern United States. It is bordered by Rhode Island to the east, Massachusetts to the north, and the state of New York to the west and the south .Connecticut is named for the Connecticut River, the major U.S. river that approximately...
dedicated a DRASH field hospital
Field hospital
A field hospital is a large mobile medical unit that temporarily takes care of casualties on-site before they can be safely transported to more permanent hospital facilities...
to a victim of the 2001 anthrax attacks
2001 anthrax attacks
The 2001 anthrax attacks in the United States, also known as Amerithrax from its Federal Bureau of Investigation case name, occurred over the course of several weeks beginning on Tuesday, September 18, 2001, one week after the September 11 attacks. Letters containing anthrax spores were mailed to...
.

Additionally, international agencies have purchased DRASH to support emergency response. In the summer of 2009, the Brazilian State of Rio de Janeiro
Rio de Janeiro
Rio de Janeiro , commonly referred to simply as Rio, is the capital city of the State of Rio de Janeiro, the second largest city of Brazil, and the third largest metropolitan area and agglomeration in South America, boasting approximately 6.3 million people within the city proper, making it the 6th...
purchased two DRASH mobile field hospitals to be deployed during large-scale emergencies.