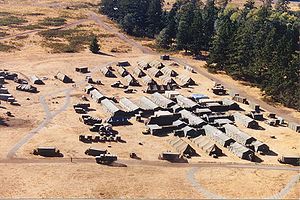 A field hospital is a large mobile medical unit that temporarily takes care of casualties on-site before they can be safely transported to more permanent hospital facilities. The concept was inherited from the battlefield (such as the mobile army surgical hospital
Mobile Army Surgical Hospital
The Mobile Army Surgical Hospital refers to a United States Army medical unit serving as a fully functional hospital in a combat area of operations. The units were first established in August 1945, and were deployed during the Korean War and later conflicts. The U.S...
or MASH), and is now applied in case of disasters or major accidents, as well as the traditional military usage.

A field hospital is a medical staff with a mobile medical kit and, often, a wide tent
Tent
A tent is a shelter consisting of sheets of fabric or other material draped over or attached to a frame of poles or attached to a supporting rope. While smaller tents may be free-standing or attached to the ground, large tents are usually anchored using guy ropes tied to stakes or tent pegs...
-like shelter (at times an inflatable structure in modern usage) so that it can be readily set up near the source of the casualties. In an urban environment, the field hospital is often established in an easily accessible and highly visible building (such as a restaurant
Restaurant
A restaurant is an establishment which prepares and serves food and drink to customers in return for money. Meals are generally served and eaten on premises, but many restaurants also offer take-out and food delivery services...
, school
School
A school is an institution designed for the teaching of students under the direction of teachers. Most countries have systems of formal education, which is commonly compulsory. In these systems, students progress through a series of schools...
, and so on). In case of an airborne structure, the mobile medical kit is often placed in normalized container; the container itself is then used as shelter.

The surgical, evacuation, or field hospitals would remain many miles in the rear, and the divisional clearing stations were never intended to provide emergency life-saving surgery. With the Army’s larger mobile hospitals unable to assume their traditional role in support of the front line combat units, the chain of evacuation was interrupted at a critical point. Some sort of interim solution had to be found quickly to provide the necessary surgical services and care to the severely wounded directly behind the front lines. Otherwise, many wounded soldiers would die from either the lack of life-saving surgery at the front or from the long and arduous evacuation trek along jungle trails from the frontal clearing stations to the nearest surgical unit. Manned with skilled surgeons and located close to the fighting to render quick, life-saving surgical intervention, the portable hospital could be moved by its own personnel to remain with the infantrymen during fluid operations.

A team of Medical Corps officers modified the basic War Department for a standard 25-bed station hospital into a new theater and table of basic for a portable hospital of 25-beds. The new unit was capable of supporting small units in its camp-type version (with 4 female Army nurses and organic vehicles) or battalion and regimental combat teams in its task force version (without the 4 nurses and organic vehicles). Commanded by a Medical Corps captain or major, the new 29-man portable hospital had 4 medical officers 3 general surgeons and 25 enlisted men, including 2 surgical and 11 medical technicians. What really marked a radical departure was that all of the unit's equipment, medical and surgical supplies, and rations could weigh no more than the 29 men could personally transport. Because the surgical demands on the theater’s hospitals were then only minimal, a large number of trained surgeons were available in Australia to man the new units.

The surgeons in many of the initial portable hospitals would set standards of excellence in surgery and care that firmly established the reputation of the portable hospitals throughout the theater. However, this was not true of all of the units, and in some instances hospital commanders took advantage of this opportunity to unburden themselves of their unproductive and less well qualified surgeons. Hastily assembled and trained, the portable hospitals suffered from many shortcomings in personnel and equipment, which would soon become obvious in the jungle fighting around Buna. Probably the single most critical problem was the severe limitation placed on the total weight to assure the unit’s portability. From the start, this meant that to be portable the unit had to give up medical and surgical equipment and supplies that would have been most useful in the field. Another handicap was the lack of a coherent doctrine for the tactical employment of the portable hospitals, along with an explanation of their exact role in the chain of treatment and evacuation within the combat zone.

The Chief Surgeon’s Office promulgated a basic doctrine in September 1942 when the portable hospitals were established, but that doctrine went to the base sections in Australia and the portable hospitals and not to the medical units or surgeons in the Advanced Base in Papua and combat units. With no actual operational experience as a basis, that doctrine was much more conjectural than concrete. The Surgeon General's Office and the War Department enthusiastically adopted SWPA's new hospital as a regular unit before the first portable hospitals proved their value in the Buna campaign. The Surgeon General sought and received approval to add 48 of the new portable hospitals to the War Department's troop basis for 1943. Based on what was learned at Buna. By the end of 1943, the 48 new units were activated, two of which were assigned to SWPA. Another 15 new units would arrive in the theater during 1944 to support the increasing pace of MacArthur's offensive operations along the northern coast of New Guinea and into the Philippines. One portable surgical hospital was now allocated per infantry regiment, 3 per division, although additional hospitals were often authorized in larger operations.

During the war, a total of 103 portable surgical hospitals were activated and 78 would serve in various theaters around the world through end of the war—19 in the China-Burma-India, China, or India-Burma theaters; 12 in the Pacific Ocean Area's South and Central Pacific theaters; and 51 in SWPA (4 moved to SWPA from the South Pacific during 1944). Six PSHs were assigned to the European Theater of Operations, but they arrived only after the end of hostilities. Thus, Carroll's temporary innovation gained significance far beyond SWPA, and the life-saving surgical work performed in all of these hospitals during the war saved the lives of many thousands of critically wounded soldiers and airmen. While equipment was always a critical concern, it was the skill level of the surgeons that most concerned the surgical consultants of the Sixth and Eighth U.S. Armies in SWPA. They saw as one of their primary functions the selection of the surgeons for the portable surgical hospitals. As the war dragged on into 1944, the pool of skilled and experienced surgeons that they could draw on in SWPA shrank as demands rapidly increased for such personnel. Increasingly, the portable surgical hospitals were manned with younger and less skilled surgeons.

The field hospital is the core of the emergency plan called plan rouge; it is then called "advanced medical post" (poste médical avancé, PMA). It is equipped by a PSM.

The PMA is organized in four zones:

In case of really massive disaster, it is possible to have several PMA; the evacuation goes then not directly to a hospital, but to another big field hospital called "medical evacuation centre" (centre médical d'évacuation, CME), to avoid the saturation of the hospitals.

In case of a red plan
French red plan
The French red plan is a French emergency plan used if an emergency has a significant number of casualties in a limited area. Its aim is to organize the rescue resources to cope with the concentrated casualties....
, the PMA is under the responsibility of a physician chosen by the director of medical rescue (DSM), and he is assisted by an firefighter
Firefighter
Firefighters are rescuers extensively trained primarily to put out hazardous fires that threaten civilian populations and property, to rescue people from car incidents, collapsed and burning buildings and other such situations...
officer chosen by the commander of rescue operation (COS). The firefighter officer has in charge the identification of the living casualties and of the secretaryship. The aim of the PMA is to sort and stabilize the casualties before their evacuation to an hospital.

A similar system can be set up as a preventive measure for some very big events (sport championship, cultural events, concert...), but managed by first aid associations. It is then called an "associative medical post" (poste associatif médicalisé, PAM). (For smaller events, is simple first aid post, with only volunteer certified first responder
Certified first responder
A certified first responder is a person who has completed a course and received certification in providing pre-hospital care for medical emergencies. They have more skill than someone who is trained in basic first aid but they are not a substitute for advanced medical care rendered by emergency...
s and no medical staff, is set up.)