Encyclopedia
This article is about the demographic
Demographics
Demographics are the most recent statistical characteristics of a population. These types of data are used widely in sociology , public policy, and marketing. Commonly examined demographics include gender, race, age, disabilities, mobility, home ownership, employment status, and even location...
features of the population
Population
A population is all the organisms that both belong to the same group or species and live in the same geographical area. The area that is used to define a sexual population is such that inter-breeding is possible between any pair within the area and more probable than cross-breeding with individuals...
of Romania
Romania
Romania is a country located at the crossroads of Central and Southeastern Europe, on the Lower Danube, within and outside the Carpathian arch, bordering on the Black Sea...
, including population density
Population density
Population density is a measurement of population per unit area or unit volume. It is frequently applied to living organisms, and particularly to humans...
, ethnicity
Ethnic group
An ethnic group is a group of people whose members identify with each other, through a common heritage, often consisting of a common language, a common culture and/or an ideology that stresses common ancestry or endogamy...
, education level, health of the populace, economic status, religious affiliations and other aspects of the population.

About 89.4% of the people of Romania
Romania
Romania is a country located at the crossroads of Central and Southeastern Europe, on the Lower Danube, within and outside the Carpathian arch, bordering on the Black Sea...
are ethnic Romanians
Romanians
The Romanians are an ethnic group native to Romania, who speak Romanian; they are the majority inhabitants of Romania....
, whose language, Romanian
Romanian language
Romanian Romanian Romanian (or Daco-Romanian; obsolete spellings Rumanian, Roumanian; self-designation: română, limba română ("the Romanian language") or românește (lit. "in Romanian") is a Romance language spoken by around 24 to 28 million people, primarily in Romania and Moldova...
, is an Eastern Romance language
Eastern Romance languages
The Eastern Romance languages in their narrow conception, sometimes known as the Vlach languages, are a group of Romance languages that developed in Southeastern Europe from the local eastern variant of Vulgar Latin. Some classifications include the Italo-Dalmatian languages; when Italian is...
, descended primarily from Latin
Latin
Latin is an Italic language originally spoken in Latium and Ancient Rome. It, along with most European languages, is a descendant of the ancient Proto-Indo-European language. Although it is considered a dead language, a number of scholars and members of the Christian clergy speak it fluently, and...
with some Slavic
Slavic languages
The Slavic languages , a group of closely related languages of the Slavic peoples and a subgroup of Indo-European languages, have speakers in most of Eastern Europe, in much of the Balkans, in parts of Central Europe, and in the northern part of Asia.-Branches:Scholars traditionally divide Slavic...
, German
German language
German is a West Germanic language, related to and classified alongside English and Dutch. With an estimated 90 – 98 million native speakers, German is one of the world's major languages and is the most widely-spoken first language in the European Union....
, Greek
Modern Greek
Modern Greek refers to the varieties of the Greek language spoken in the modern era. The beginning of the "modern" period of the language is often symbolically assigned to the fall of the Byzantine Empire in 1453, even though that date marks no clear linguistic boundary and many characteristic...
, Hungarian
Hungarian language
Hungarian is a Uralic language, part of the Ugric group. With some 14 million speakers, it is one of the most widely spoken non-Indo-European languages in Europe....
and Turkish
Turkish language
Turkish is a language spoken as a native language by over 83 million people worldwide, making it the most commonly spoken of the Turkic languages. Its speakers are located predominantly in Turkey and Northern Cyprus with smaller groups in Iraq, Greece, Bulgaria, the Republic of Macedonia, Kosovo,...
borrowings. Romanians are by far the most numerous group of speakers of an Eastern Romance language today. It has been said that they constitute "an island of Latinity" in Eastern Europe, surrounded on all sides either by Slavic peoples
Slavic peoples
The Slavic people are an Indo-European panethnicity living in Eastern Europe, Southeast Europe, North Asia and Central Asia. The term Slavic represents a broad ethno-linguistic group of people, who speak languages belonging to the Slavic language family and share, to varying degrees, certain...
or by the Hungarians.

The Hungarian minority in Romania constitutes the country's largest minority, 6.6 per cent of the population.

Sources give varied estimates for Romania's historical population. The National Institute for Research and Development in Informatics (NIRDI) gives the following numbers:


However, the following numbers, very different for the early years, come from the Tacitus Historical Atlas 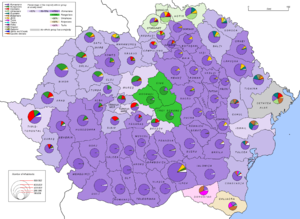 Before World War II
World War II
World War II, or the Second World War , was a global conflict lasting from 1939 to 1945, involving most of the world's nations—including all of the great powers—eventually forming two opposing military alliances: the Allies and the Axis...
, minorities represented more than 28% of the total population. During the war that percentage was halved, largely by the loss of the border areas of Bessarabia
Bessarabia
Bessarabia is a historical term for the geographic region in Eastern Europe bounded by the Dniester River on the east and the Prut River on the west....
and northern Bukovina
Bukovina
Bukovina is a historical region on the northern slopes of the northeastern Carpathian Mountains and the adjoining plains.-Name:The name Bukovina came into official use in 1775 with the region's annexation from the Principality of Moldavia to the possessions of the Habsburg Monarchy, which became...
(to the former Soviet Union
Soviet Union
The Soviet Union , officially the Union of Soviet Socialist Republics , was a constitutionally socialist state that existed in Eurasia between 1922 and 1991....
, now Moldova
Moldova
Moldova , officially the Republic of Moldova is a landlocked state in Eastern Europe, located between Romania to the West and Ukraine to the North, East and South. It declared itself an independent state with the same boundaries as the preceding Moldavian Soviet Socialist Republic in 1991, as part...
and Ukraine
Ukraine
Ukraine is a country in Eastern Europe. It has an area of 603,628 km², making it the second largest contiguous country on the European continent, after Russia...
) and southern Dobrudja (to Bulgaria
Bulgaria
Bulgaria , officially the Republic of Bulgaria , is a parliamentary democracy within a unitary constitutional republic in Southeast Europe. The country borders Romania to the north, Serbia and Macedonia to the west, Greece and Turkey to the south, as well as the Black Sea to the east...
). Two-thirds of the ethnic German population either left or were deported after World War II
German exodus from Eastern Europe
The German exodus from Eastern Europe describes the dramatic reduction of ethnic German populations in lands to the east of present-day Germany and Austria. The exodus began in the aftermath of World War I and was implicated in the rise of Nazism. It culminated in expulsions of Germans from...
, leaving behind a population of 60,000 ethnic Germans in Romania today. Of a total population of over half a million Jews before World War II, about half were killed during the Holocaust. Mass emigration, mostly to Israel
Israel
The State of Israel is a parliamentary republic located in the Middle East, along the eastern shore of the Mediterranean Sea...
and United States
United States
The United States of America is a federal constitutional republic comprising fifty states and a federal district...
, has reduced the surviving Jewish community to less than 6,000 in 2002.


Between WW I and WW II

As a consequence of the pro-natalist policies of the Nicolae Ceauşescu
Nicolae Ceausescu
Nicolae Ceaușescu was a Romanian Communist politician. He was General Secretary of the Romanian Communist Party from 1965 to 1989, and as such was the country's second and last Communist leader...
regime, Romania has a higher proportion of young adults in its population than any other Western country except Slovenia
Slovenia
Slovenia , officially the Republic of Slovenia , is a country in Central and Southeastern Europe touching the Alps and bordering the Mediterranean. Slovenia borders Italy to the west, Croatia to the south and east, Hungary to the northeast, and Austria to the north, and also has a small portion of...
. 8.55% of the Romanian population was born in the period from 1976 to 1980, compared with 6.82% of American
United States
The United States of America is a federal constitutional republic comprising fifty states and a federal district...
s and 6.33% of Britons
British people
The British are citizens of the United Kingdom, of the Isle of Man, any of the Channel Islands, or of any of the British overseas territories, and their descendants...
.

The population growth rate is -0.127% (2007 estimate).
In common with many Eastern European countries, Romania has experienced a decline in population in recent years. The population fell by 1,129,000 or 4.95% in the decade 1992–2002. In three counties, Caraş-Severin
Caras-Severin County
Caraș-Severin is a county of Romania, in the historical region of Banat and few villages in Transylvania, with the county seat at Reșița.-Demographics:The county is part of the Danube-Kris-Mureș-Tisza euroregion....
, Hunedoara
Hunedoara County
Hunedoara is a county of Romania, in Transylvania, with its capital city at Deva.-Demographics:In 2002, it had a population of 485,712 and the population density was 69/km².*Romanians - 92%*Hungarians - 5%*Romas - 2%*Germans under 1%....
and Teleorman
Teleorman County
Teleorman is a county of Romania, in the historical region Muntenia, with its capital city at Alexandria.The name Teleorman is of Cumanic origin. It literally means crazy forest and, by extension, "thick and shadowy forest" in the Cuman language...
, the population fell by more than 10% over the same period. Only two counties, Ilfov
Ilfov County
Ilfov is the county that surrounds Bucharest, the capital of Romania. It used to be largely rural, but after the fall of communism, many of the county's villages and communes developed into high-income commuter towns, which act like suburbs or satellites of Bucharest...
and Iaşi
Iasi County
Iași is a county of Romania, in Moldavia, with the administrative seat at Iași.-Demographics:As of 1 July 2007, Iași County had a population of 825,100, making it the second most populous county in Romania after Bucharest, with a population density of 150/km².*Romanians - 98.1%*Roma -...
saw their population increase. 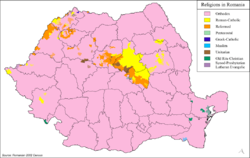 Religious affiliation tends to follow ethnic lines, with most ethnic Romanians identifying with the Romanian Orthodox Church
Romanian Orthodox Church
The Romanian Orthodox Church is an autocephalous Eastern Orthodox church. It is in full communion with other Eastern Orthodox churches, and is ranked seventh in order of precedence. The Primate of the church has the title of Patriarch...
. The Greek Catholic or Uniate church
Eastern Rite Catholic Churches
The Eastern Catholic Churches are autonomous, self-governing particular churches in full communion with the Bishop of Rome, the Pope. Together with the Latin Church, they compose the worldwide Catholic Church...
, reunified with the Orthodox Church by fiat in 1948, was restored after the 1989 revolution. The 2002 census indicates that 0.9% of the population is Greek Catholic, as opposed to about 10% prior to 1948. Roman Catholics, largely ethnic Hungarians and Germans, constitute 4.7% of the population; Calvinists, Baptists (see Baptist Union of Romania
Baptist Union of Romania
The Baptist Union of Romania is an alliance of Baptist churches for cooperative ministry in Romania. Since independent churches have no legal standing in Romania, the Baptist Union also provides a mediatorial relationship between churches and government.The first modern-era Baptists in Romania...
and Convention of the Hungarian Baptist Churches of Romania
Convention of the Hungarian Baptist Churches of Romania
The Convention of the Hungarian Baptist Churches of Romania is an organization of ethnic Hungarian Baptists in Romania, united for promoting cooperative ministry....
), Pentecostals, and Lutherans make up another 5%. There are smaller numbers of Unitarians, Muslims, and other religions.