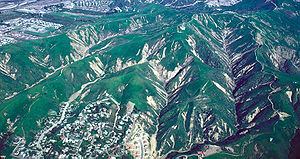 A debris flow is a fast moving, liquefied landslide of unconsolidated, saturated debris that looks like flowing concrete. It is differentiated from a mudflow
Mudflow
A mudslide is the most rapid and fluid type of downhill mass wasting. It is a rapid movement of a large mass of mud formed from loose soil and water. Similar terms are mudflow, mud stream, debris flow A mudslide is the most rapid (up to 80 km/h, or 50 mph) and fluid type of downhill mass...
in terms of the viscosity
Viscosity
Viscosity is a measure of the resistance of a fluid which is being deformed by either shear or tensile stress. In everyday terms , viscosity is "thickness" or "internal friction". Thus, water is "thin", having a lower viscosity, while honey is "thick", having a higher viscosity...
and textural properties of the flow. Flows can carry material ranging in size from clay to boulders, and may contain a large amount of woody debris such as logs and tree stumps. Flows can be triggered by intense rainfall, glacial melt, or a combination of the two. Speed of debris flows can vary from 5 km/h to up to 80 km/h in extreme cases. Volumes of material delivered by single events vary from less than 100 to more than 100,000 cubic metres. Variables considered important in debris flow initiation include slope angle, available loose sediment, and degree of land disturbance by activities such as forest harvesting. Debris flows are often more frequent following forest and brush fires, as experience in southern California clearly demonstrates. Debris flows are extremely destructive to life and property, and claim thousands of lives world-wide in any given year. They are a particular problem in steep mountainous areas subjected to intense rainstorms, and have received particular attention from researchers in Japan, Western USA, Western Canada, New Zealand, the European Alps, and Kazakhstan.

Debris flows generally form when unconsolidated material becomes saturated and unstable, either on a hillslope or in a stream channel. Flows are accelerated downhill by gravity and tend to follow steep mountain channels. The front, or 'head' of debris flow often contains a great deal of coarser material such as boulders and logs. Trailing behind this frontal lobe is the less viscous, main part of the flow that contains sand, silt and clay. Debris flows eventually become 'thinner', or less viscous, muddy flood waters as they deposit their coarser components in areas of reduced gradient. Debris flows tend to move in pulses, or discrete surges, as friction
Friction
Friction is the force resisting the relative motion of solid surfaces, fluid layers, and/or material elements sliding against each other. There are several types of friction:...
or other barriers are overcome during the flow. Sometimes earlier pulses or previous debris flow deposits form levees which confine the flow until they are breached by later, larger flows. The presence of older levees (a.k.a. lateral deposits) provides some idea of the magnitudes of previous debris flows in a particular area, and through dating of trees growing on such deposits, may indicate the approximate frequency of destructive debris flows. This is important information for land development in areas where debris flows deposit material, known as debris fans and alluvial fans. The big debris flow or landslide
Landslide
A landslide or landslip is a geological phenomenon which includes a wide range of ground movement, such as rockfalls, deep failure of slopes and shallow debris flows, which can occur in offshore, coastal and onshore environments...
is called yamatsunami (山津波), literally mountain tsunami
Tsunami
A tsunami is a series of water waves caused by the displacement of a large volume of a body of water, typically an ocean or a large lake...
in Japan.

A lahar
Lahar
A lahar is a type of mudflow or debris flow composed of a slurry of pyroclastic material, rocky debris, and water. The material flows down from a volcano, typically along a river valley. The term is a shortened version of "berlahar" which originated in the Javanese language of...
is a debris flow related in some way to volcanic activity, either directly as a result of an eruption, or indirectly by the collapse of loose material from the flanks of a recently active volcano. A variety of factors may trigger a lahar, including melting of glacial ice due to volcanic activity or pyroclastic flow
Pyroclastic flow
A pyroclastic flow is a fast-moving current of superheated gas and rock , which reaches speeds moving away from a volcano of up to 700 km/h . The flows normally hug the ground and travel downhill, or spread laterally under gravity...
, intense rainfall on loose pyroclastic material, or the out bursting of a lake that was previously dammed by pyroclastic or glacial material. The word lahar is of Indonesian origin, but is now routinely used by geologists world-wide to describe volcanogenic debris flows.

A jökulhlaup
Jökulhlaup
A jökulhlaup is a glacial outburst flood. It is an Icelandic term that has been adopted by the English language. It originally referred to the well-known subglacial outburst floods from Vatnajökull, Iceland which are triggered by geothermal heating and occasionally by a volcanic subglacial...
is a debris flow that originates from a glacial outburst flood. Jökulhlaup is an Icelandic word which refers specifically to floods having a glacial trigger. In the case of Iceland, many such floods are triggered by sub-glacial volcanic eruptions, since Iceland sits atop the Mid-Atlantic Ridge. Elsewhere, a more common cause of jökulhlaups is the breaching of ice-dammed or moraine-dammed lakes. Such breaching events are often caused by the sudden calving of glacier ice into a lake, which then causes a displacement wave to breach a moraine or ice dam. Downvalley of the breach point, a jökulhlaup may increase greatly in size through entrainment of loose sediment and water from the valley through which it travels. Travel distances may exceed 100 km.