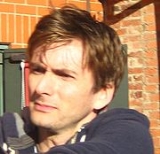 Overview
David Tennant is a Scottish actor. In addition to his work in theatre, including a widely praised Hamlet
Prince Hamlet
Prince Hamlet is a fictional character, the protagonist in Shakespeare's tragedy Hamlet. He is the Prince of Denmark, nephew to the usurping Claudius and son of the previous King of Denmark, Old Hamlet. Throughout the play he struggles with whether, and how, to avenge the murder of his father, and...
, Tennant is best known for his role as the tenth incarnation
Tenth Doctor
The Tenth Doctor is the tenth incarnation of the protagonist of the long-running BBC television science-fiction series Doctor Who. He is played by David Tennant, who appears in three series, as well as eight specials...
of the Doctor
Doctor (Doctor Who)
The Doctor is the central character in the long-running BBC television science-fiction series Doctor Who, and has also featured in two cinema feature films, a vast range of spin-off novels, audio dramas and comic strips connected to the series....
in Doctor Who
Doctor Who
Doctor Who is a British science fiction television programme produced by the BBC. The programme depicts the adventures of a time-travelling humanoid alien known as the Doctor who explores the universe in a sentient time machine called the TARDIS that flies through time and space, whose exterior...
, along with the title role in the 2005 TV serial Casanova
Casanova (2005 TV serial)
Casanova is a 2005 British television comedy drama serial, written by television scriptwriter Russell T Davies and directed by Sheree Folkson...
and as Barty Crouch, Jr. in the 2005 film adaptation, Harry Potter and the Goblet of Fire
Harry Potter and the Goblet of Fire (film)
Harry Potter and the Goblet of Fire is a 2005 fantasy film directed by Mike Newell and based on the novel of the same name by J. K. Rowling. It is the fourth instalment in the Harry Potter film series, written by Steve Kloves and produced by David Heyman...
.
Tennant was born in Bathgate
Bathgate
Bathgate is a town in West Lothian, Scotland, on the M8 motorway west of Livingston. Nearby towns are Blackburn, Armadale, Whitburn, Livingston, and Linlithgow. Edinburgh Airport is away...
, West Lothian
West Lothian
West Lothian is one of the 32 unitary council areas in Scotland, and a Lieutenancy area. It borders the City of Edinburgh, Falkirk, North Lanarkshire, the Scottish Borders and South Lanarkshire....
, the son of Essdale Helen (née McLeod) and Alexander McDonald
Alexander McDonald (Moderator)
Dr. Alexander "Sandy" McDonald is a retired minister of the Church of Scotland.Dr. McDonald was born in Bishopbriggs, Scotland in 1937, the son of Jessie Helen Low and Alexander M. McDonald. He worked in the timber industry in the 1950s, prior to National Service in the Royal Air Force...
. He grew up with his brother Blair and sister Karen in Ralston, Renfrewshire
Renfrewshire
Renfrewshire is one of 32 council areas used for local government in Scotland. Located in the west central Lowlands, it is one of three council areas contained within the boundaries of the historic county of Renfrewshire, the others being Inverclyde to the west and East Renfrewshire to the east...
, where his father was the local Church of Scotland
Church of Scotland
The Church of Scotland, known informally by its Scots language name, the Kirk, is a Presbyterian church, decisively shaped by the Scottish Reformation....
minister.

I shared a caravan with Peter Davison|Peter Davison once. But I thought I'd better not tell him that I'd been a big fan, cos we're sharing a caravan – he might get a bit scared.

About his fanboy tendacies

The story between the Doctor and Rose is basically a love story without the shagging.

They weren't shagging in the TARDIS, because that would be weird.

About the Doctor and Rose's relationship

The Doctor does have some long speeches and he talks very quickly. Learning all his babble can take a while, but it's very well written babble so I don't mind and you do get quicker. When I filmed Recovery during the break in Doctor Who I would sit down at the weekend and learn the script in an hour and I was like 'Hang on??' You do get used to it though.

I really wouldn't. We have such good writers on the show. And I couldn't walk up to Russell and hand it over and say 'Here's 45 minutes for you' and then he would have to hand it back and say 'Thanks, but it's shit!'

When asked if he'd ever write an episode

I would quite like to try my hand at directing although I would do it in the theatre rather than in TV or film. Theatre is more just about telling the story. I understand the way the theatre works. I will leave the TV to the experts. Doctor Who is very complicated to direct. It would be impossible to direct that and act in it as well.

About being on the other side of the camera

"I like to be called master, especially by people called Layla..." Tennant at Live Earth|Live Earth concert 2007